The very first thing I should mention is that DEAD DICKS deals with suicide. If that’s a triggering or sensitive subject, I wouldn’t watch the film or continue reading this review. To the filmmakers’ credit, they’re quite aware of this, and they include a message with the number of a crisis hotline before the movie starts. 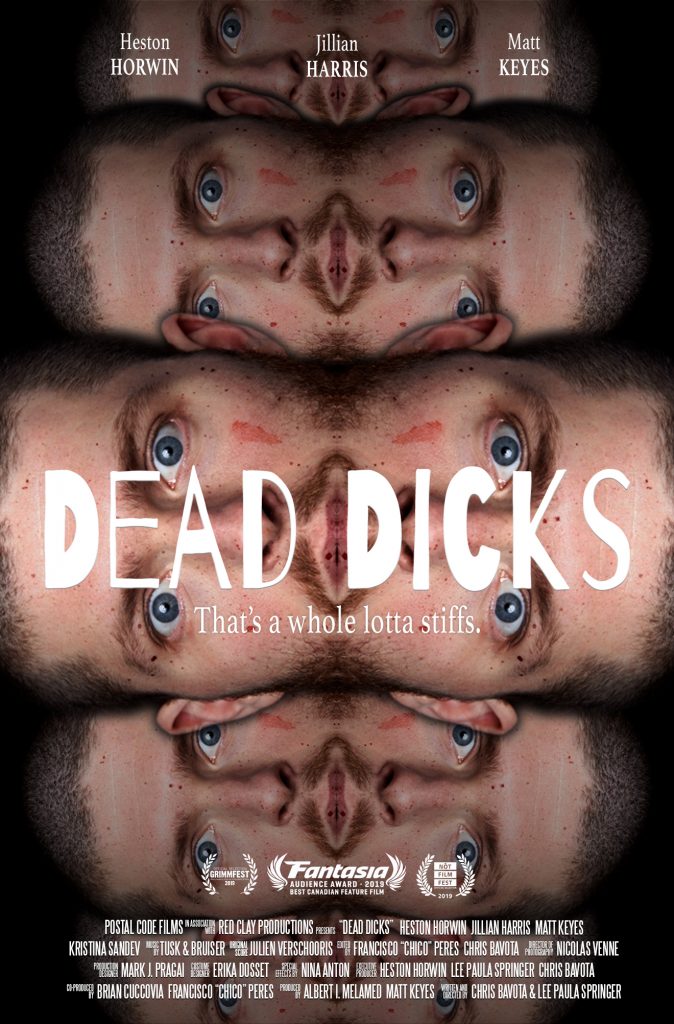 Written and directed by Chris Bavota and Lee Paula Springer, DEAD DICKS concerns an unstable, hyper-focused artist named Richie (Heston Horwin), who is emotionally and perhaps even financially dependent on his sister Becca (Jillian Harris). One day Richie kills himself, only to find that he’s been reborn through a giant vagina on his bedroom wall. Intrigued, he begins to experiment, killing himself several more times in a variety of ways to try to figure out what the hell’s going on. In the process, his dead husks accumulate throughout his apartment.

As you might expect with this kind of movie, Richie and Becca are pretty much complete opposites. The only common thing they share is that they’re siblings. Becca’s apartment is orderly, antiseptic, and bland. She’s getting a college education and has a stable job. Richie’s apartment, like his life, is a complete mess. He seems to have no job to speak of, he’s an artist, and he’s, well, a bit of an eccentric. But despite their lack of commonalities, Becca cares deeply about her brother, and constantly worries about him. She’s also willing to step in and help whenever she’s needed. After all, when Richie’s stomach proves to be too weak to cut his own corpses into small pieces and stuff them into garbage bags, Becca steps up and does it herself. I am not sure my brothers would do this for me. 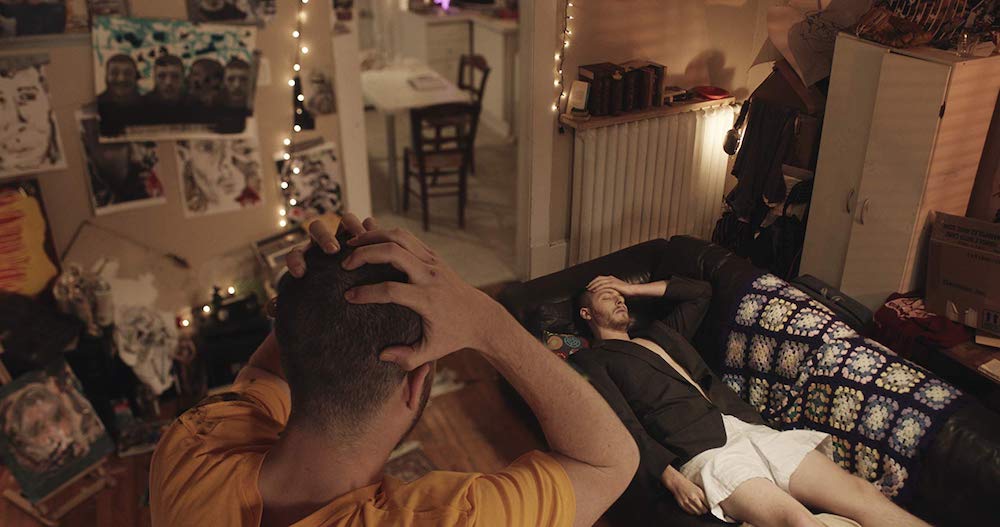 DEAD DICKS is advertised as a comedy, and it’s definitely funny, though I personally didn’t have a lot of laugh out loud moments. Actually, the tone is a bit awkward, especially as we get toward the climax and everything suddenly gets very serious and dark. I think it might have been a mistake to try to make this thing a comedy. If the whole film had been played straight and stuck with the more brooding tone the movie might have felt a bit more unified. Ultimately, this is a pretty small complaint, since the film’s story, directing, and acting are all top notch.

Harris and Horwin are solid actors who play their parts mostly straight, adding much needed verisimilitude to a pretty absurd, though well-written, concept. Also, at least one of the two is in every scene. A lot of pressure in that, perhaps, but it certainly doesn’t show in their performances.

On a technical level, there’s nothing too revolutionary as far as shot composition or camera movement. It’s all a bit lean, but at least it stays out of the way of the story. The color palate features a lot of greens, kind of a mucus green at times. Which is interesting, because it made the apartment kind of seem like a living thing.  There’s a lot of that kind of biological imagery, not least of which, is the giant wall vagina.

There’s some really cool practical effects, especially the, uh, birthing scenes, where a new Richie, fully grown and stuffed inside a giant white placenta, emerges from the wall vagina. Watching the dude wrestle his way out of the placenta is the best kind of gross, and is genuinely funny. It’s like he’s wiggling out of one of those rubber stress balls.

DEAD DICKS isn’t particularly gory, though there is the aforementioned scene where Becca is cutting up the bodies. There is also a scene toward the end where a character gets his brain splattered hither and yon.

And that’s about it, as far as explicit violence. We see one of the suicides at the beginning of the movie, but it’s pretty tame (as well as absurd). Everything else is suggested. A lot of that probably had to do with time constraints and such, since the directors mention in one of the special features that they only had a week to film the apartment scenes. I think it works better that way. Comedy or not, I’m not sure how much actual suicide I’d be comfortable watching.

The very end of the film could have been expanded into another movie. It was quite psychedelic and ambiguous. The perfect amount of ambiguity, actually. After all, do we really need to know on an intellectual level how a magical re-birthing vagina ended up on Richie’s wall? I say no.

This is a fun movie. The humor might fall a little flat for some, and the tone is a bit wonky, but most horror fans are going to find something they like in the thing. Bavota and Springer have crafted a lean, engaging film that doesn’t wear out its welcome.

Bonus features include video diaries, a commentary by the directors, an FX featurette, and Artsploitation trailers.

DEAD DICKS is available on DVD and Blu-Ray now.