As the calendar lurches through August, summer seeping away with each new day, there’s an instinctual, cultural sensation that the year is winding down, an ending paradoxically heralded by the beginning of a new school year. Even if you’ve long graduated from high school or college, this time of the year probably still resonates like a phantom limb of anxiety and anticipation; if, like me, you signed up to work in education for a career, that anxiety is very real and might even inspire you to do a weird thing, like recommend a bunch of slasher movies set in schools as a way to cope with starting a new year. And thanks to the ’80s in particular, there’s no shortage of such movies that paint high school hallways and college campuses red, many of them currently streaming, allowing you to fill up your television with pranks, childhood trauma, teenage drama, and outrageous bloodshed. You know, kind of like gym class, only not nearly as embarrassing for you. And by you, I definitely mean you and not me. 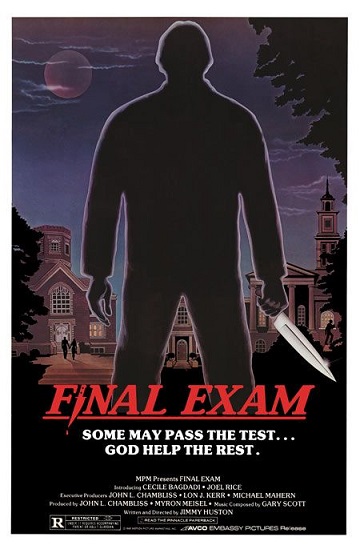 I don’t know that FINAL EXAM is the absolute best ’80s campus slasher (THE HOUSE ON SORORITY ROW makes a strong case), but it’s the best that hails from off the beaten path. Filmed in and  around the Carolinas on a shoestring budget, it’s not exactly one of those amateur, backyard productions. However, it has that same kind of homespun charm, particularly in the way it operates without a safety net, allowing its filmmakers to just go wild. Look no further than the opening prank some frat boys pull to get out of taking their finals: I won’t dare spoil it but will say you’d never get away with putting it in a film today. Hell, I’m not sure anyone with good taste would have done it even in 1981. FINAL EXAM is full of more weird decisions: it’s thinly plotted even by slasher standards, features some scattered, largely bloodless kills, and boasts one of the most generic psychos to ever stalk the screen. But what it lacks in fulfilled slasher movie expectations, it makes up for with atmosphere, style, kooky personality, and a colorful cast of goofballs, country bumpkins, and rascals. SORORITY ROW might be the decade’s campus slasher valedictorian, but FINAL EXAM is the even more lovable class clown, and, with this genre, that might count for more. 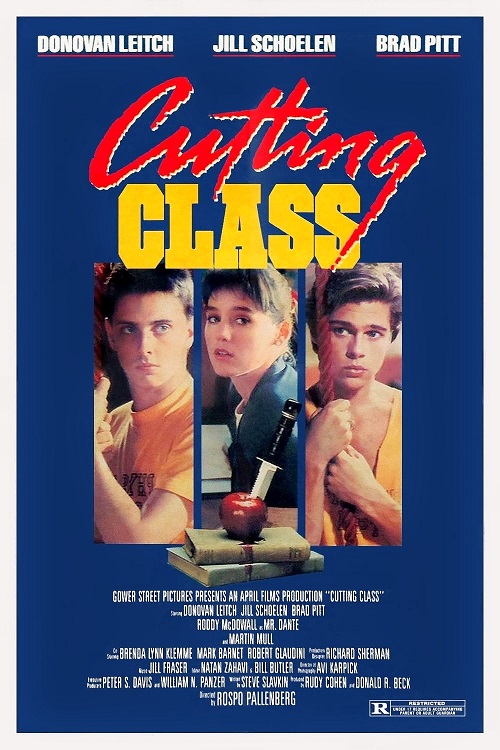 In fact, let me give it to you straight about this list: we’re mostly going to be dealing with the class clowns of this particular movement, those weird, offbeat slashers that march to the beat of their own drum. And, boy, does CUTTING CLASS really have its own peculiar drum as it turns a psycho loose in the halls of Furley High, home to the most hateful student body and most lecherous teaching staff in horror history. Seriously, Jill Schoelen’s Paula Carson might be the only pure soul of the bunch, and the poor girl spends most of the movie being leered at by teachers, principals, and other students. Among the students is boyfriend Dwight (Brad Pitt!), a controlling, manipulative asshole who becomes the prime suspect when someone starts knocking off students and teachers alike. An even more obvious suspect is his former friend, Brian (Donovan Leitch), who’s recently returned from a stint in a mental institution. CUTTING CLASS’s crooked path puts these two on an obvious collision course, but there’s nothing predictable about the inevitable clash. Handsaw duels, demented math problems, and a hellacious punchline to a movie-long gag involving Martin Mull are but a few of the surprises lurking in the outrageous climax. Believe me: you want to feel this film’s tingle. 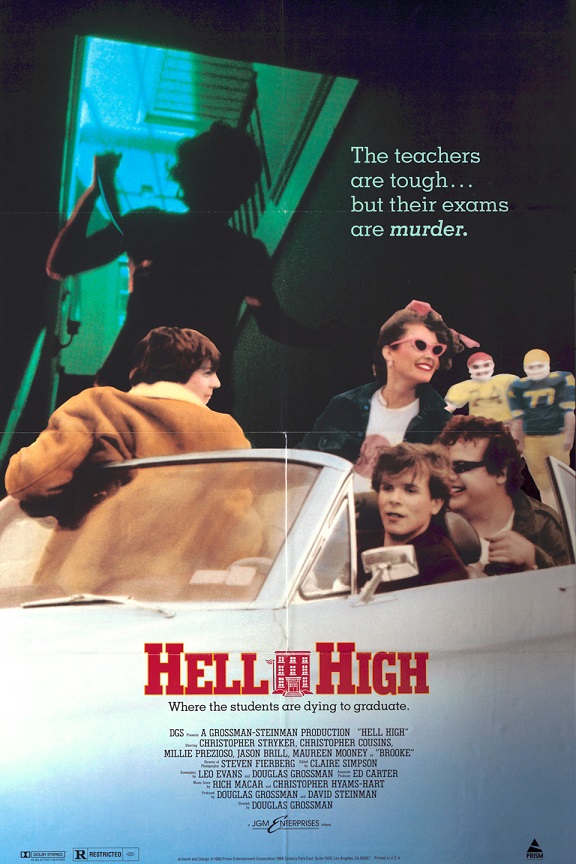 Forget being off the beaten path: HELL HIGH strays so far from its slasher contemporaries that it resides in its own zip code. The hallmarks of the genre appear–childhood trauma, psychosexual bloodshed, youthful shenanigans–but they’re all scrambled into a haywire transmission. HELL HIGH just feels a little bit off in the way its characters’ typical, carefree pranks escalate to a genuinely menacing confrontation when they run afoul of the wrong target. Ringleader Dickens (Christopher Strkyer) is one of the genre’s most slippery characters, an impish trickster who promises liberation for sensitive jock Jon-Jon (Christopher Cousins) and other outcasts. But there’s something genuinely sinister about him too, so it’s no wonder he eventually plunges his followers into gore-soaked chaos when they become unwitting prey to an unlikely predator. Tricky, unpredictable, and just downright disturbing, HELL HIGH is this list’s most notable deviation from the formula. These kids aren’t alright. 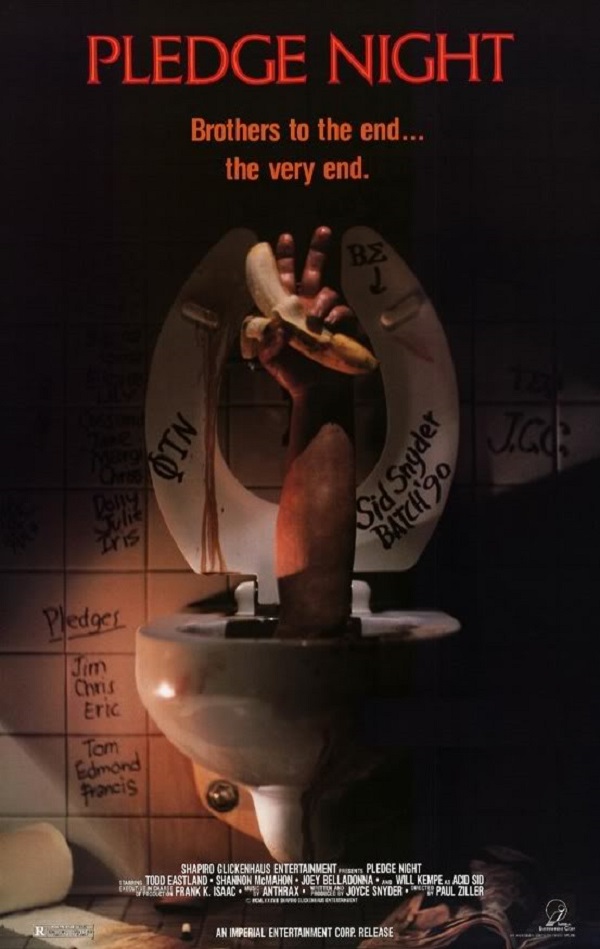 Getting back to class clowns, wait until you get a load of this late entry in the slasher cycle. As the title suggests, it revolves around a fraternity’s hazing rituals, as the boys of Phi Up ruthlessly torment a group of rising pledges with an assortment of downright disgusting and mean initiation pranks. The joke’s on them, however, when campus lore about a pledge who died during hell week 20 years earlier turns out to be no myth. Before long, the jerks of Phi Up (and members of their sister sorority) fall prey to the undead spirit of the dead pledge Sidney Scheider, who’s capable of inhabiting any space, be it the body of an ill-fated frat boy or a damn toilet (like the Ghoulies, Sidney gets you in the end). Featuring an abundance of outrageous gore effects, an Anthrax soundtrack, and confounding story decisions to spare, PLEDGE NIGHT is another slasher that’s just too weird and fun to deny, even if it’s not dead set on filling in all of the bubbles required by the genre. It’s a weirdly grungy slasher, caked in layers of grime, grit, and graffiti that gives it an odd flavor that would almost be off-putting if the movie ultimately weren’t so silly. 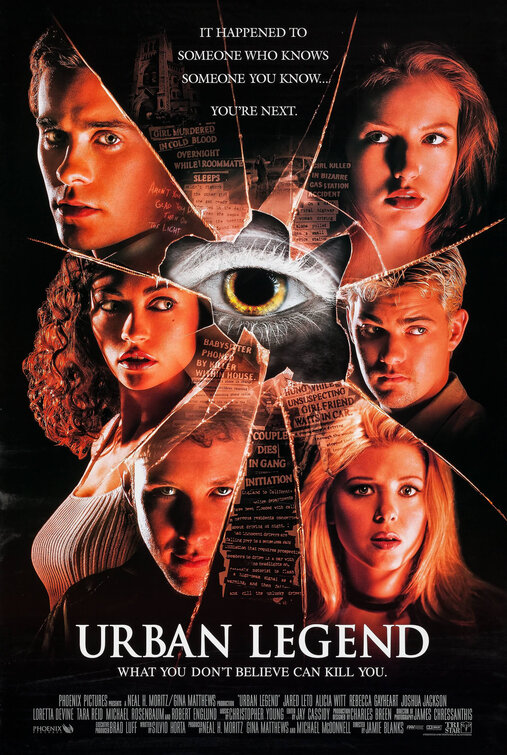 SCREAM inspired a brief slasher resurgence as the ’90s closed, and URBAN LEGEND is arguably the best of this bunch. Boasting a killer hook that finds a serial killer recreating infamous urban legends on a campus with a sordid history, it delivers a slick, clever update on the genre’s well-worn formula. Save for some in-jokes at the expense of some of its cast (Joshua Jackson can’t turn off the “Dawson’s Creek” theme song quickly enough when it blares on the car radio), it’s mostly content to be just that: an update of an old staple that toys with convention rather than upending them, satisfied to creatively serve up a body count and an intriguing mystery that finds the story spiraling in several unpredictable directions. It does so with some of the old guard in tow, as the likes of Brad Dourif, Robert Englund, and Danielle Harris appear, helping to pass the torch to the next generation, allowing it to shine. None of them shine more brightly than Rebecca Gayheart, who, in a more just world, would have become a slasher icon for the new millennium. We’ll always have this and SCREAM 2, at least.