ENTANGLEMENT is a romantic comedy that begins with a series of botched suicide attempts from the emotionally damaged Ben (Thomas Middleditch), who subsequently goes on a journey to figure out the exact moment his life went wrong. He uses string to map out a timeline of his life, like a diligent FBI agent seeking cause and effect instead of a serial killer. His theories are thrown into disarray when his father tells him he almost had an adopted sister, who they had to return when they discovered his mother was pregnant the same day. (I’ve never heard that rule, that an expecting couple is not allowed to adopt, but for the sake of the story I’ll roll with it.) 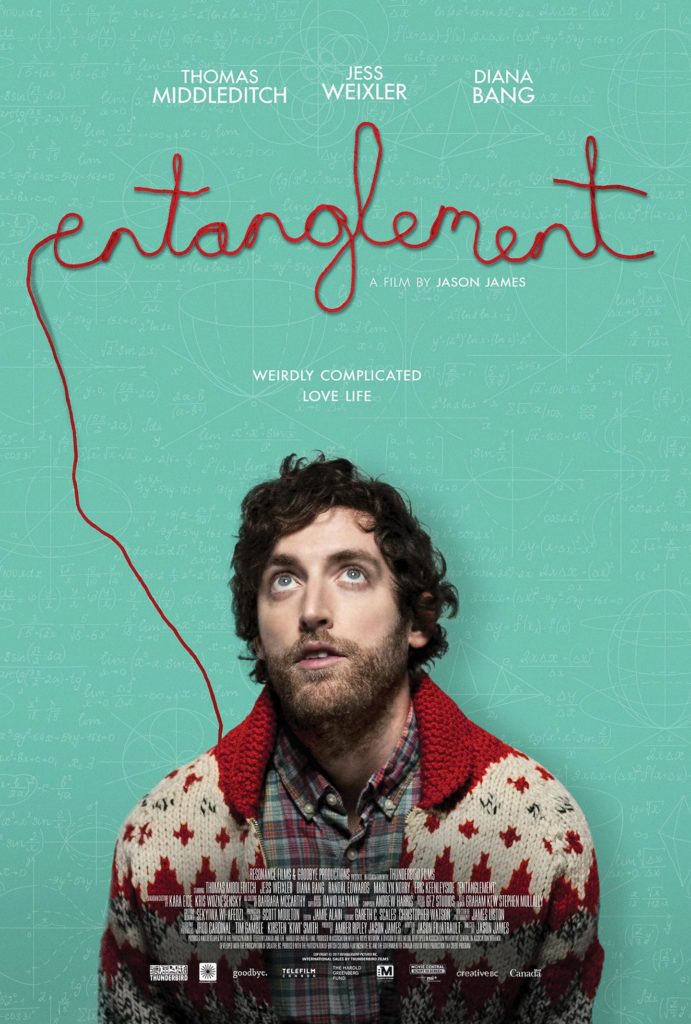 His quest to find this almost-sister leads him to Hanna (Jess Weixler). The coy, almost incest makes their flirtations dangerous, combined with the fact she is a shoplifting, rule breaking, wallet stealing kleptomaniac, which are traits only found endearing in indie romance dream girls. The parallel woman in Ben’s life is his well-intentioned neighbor Tabby (Diana Bang). Neither of these characters are really given any sort of motivation or backstory of their own; they are here solely to enable his mental illness.

The film toys with magical realism — elements of plush deer coming to life, jellyfish in the public pool, talking images in the mirror, and the like. Director Jason James films enacts a crisp, lively style of vaguely off-kilter and dreamlike compositions. The soundtrack is full of ’50s pop songs and doo wop, giving an upbeat counterpoint to the dark comedy.

Weixler and Middleditch have a friendly, comfortable dynamic that brings him out of being a sad sack and more of an affable everyman. The usage of quantum entanglement is a nice twist on the theme of fate generally inherent in the genre, and some surprises introduced late in the plot help bring it out of the indie romance doldrums. ENTANGLEMENT is a relatable, offbeat charmer that tries to do something different and serves as a nice calling card for everyone involved.