It’s easy to water down the zombie genre into a sea of pointless gore-fests. The past few decades have been so hyper-saturated with zombie media, zombie shows, zombie popsicle molds, that it’s hard to remember the social commentary that was at the heart of the genre at its infancy. Fortunately, Jeff Barnaby (RHYMES FOR YOUNG GHOULS) not only remembers this legacy, but makes it intensely culturally personal in his new film, BLOOD QUANTUM. 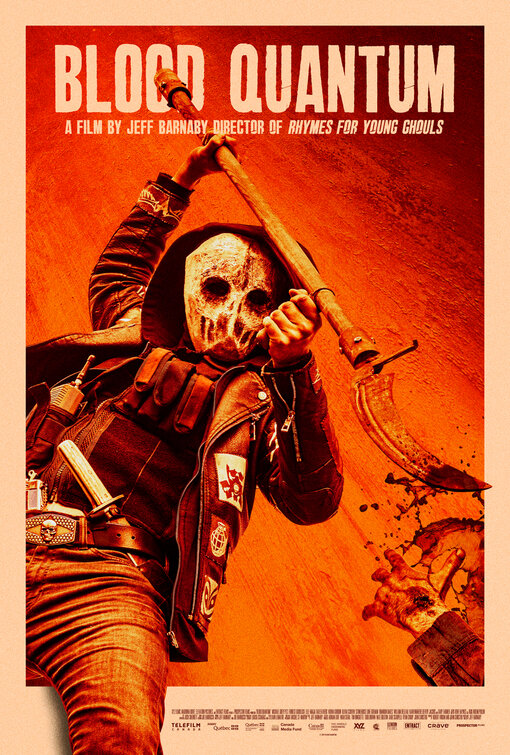 Taking place on the same Mi’qmaq reservation as his previous film, RHYMES FOR YOUNG GHOULS, BLOOD QUANTUM is a scathing commentary on the destruction of First Nation lands, and the planet in general, for the purposes of colonial industry. The film opens with an animated vignette, a motif that recurs throughout, of factory runoff poisoning the waters of the womb of mother earth, spreading the sickness that infects first the salmon, then the dogs, then all of humanity; a species destroyed by a plague of its own greed and selfishness unleashed upon itself by a tired, furious force of nature.

After taking us through the initial hours of the outbreak, the film flashes forward months later to a world where the roles have been completely reversed. The reservation where the tribe had been forced into as their land was stolen is now the last safe sanctuary in Ontario, as the last vestiges of white townies succumb to the plague while the tribe and all of its members enjoy a total immunity to its effects. As such, the rez slowly takes in more and more white refugees, causing a schism between those who want to do right by the remainder of humanity, and those who will not forget the pain of the past. A schism that threatens to destroy the tribe from the inside out. 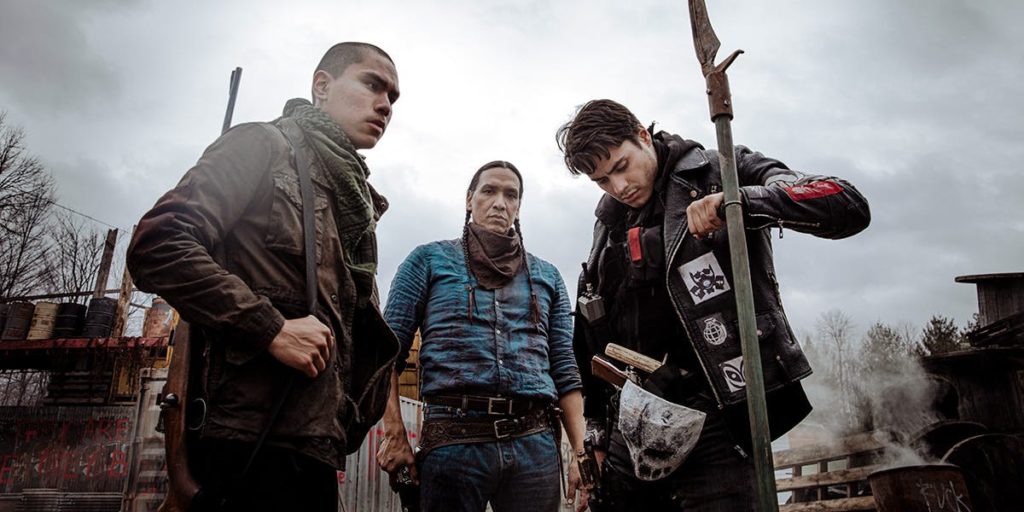 BLOOD QUANTUM employs an all First Nation cast and majority of their crew, and Barnaby uses this to show the differing generational experiences and points of view from more or less every angle. There are the two elders, Gisigu (Stonehorse Lone Goeman), a veteran of World War II, a potential reference to the use of “code talkers” for espionage and cypher purposes, and Bumper (Brandon Oakes), a hermit who lives deep in the woods and speaks only their native language. The second generation composes of Sheriff Traylor (Michael Greyeyes) and his ex girlfriend and nurse Joss (Elle-Máijá Tailfeathers), the former taking on a peacekeeping role in the rez and the latter between worlds, treating both the Mi’qmaq residents and the white townies that they despise. Finally, the youngest generation is exemplified by two diametrically opposed brothers Joseph (Forrest Goodluck) and Lysol (Kiowa Gordon).

Goodluck and Gordon play their adversarial fraternity with amazing empathy and depth. One has, one could say, fully modernized. He dates a townie, regardless of how that makes his distrusting neighbors feel, and truly seems to want the best for his people and people in general. He’s empathetic, smart, but also extremely naive and easily led astray by his brother. Lysol, on the other hand, exemplifies what Barnaby in both films sees as the fallen aspect of the new generation. He’s violent, an addict and an alcoholic. Rather than letting his trauma and hatred transform him or teach him, he lashes out at all around him,  and in the face of the plague is more than happy to use the white townie women as fucktoys and actively discusses murdering every refugee in the rez as well as the cowards who harbor them, going so far as to call his brother’s girlfriend his “pet.” 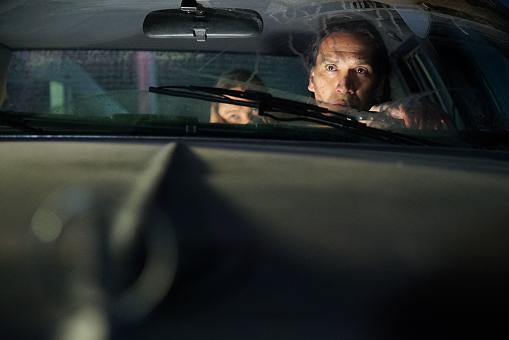 This powderkeg explodes in a fantastically-shot, claustrophobic nightmare as Lysol and his followers, coked-up and drunk, unleash a zombie into the sanctuary on purpose, no longer caring that his people are dying as well, as long as he can unleash his anger. The tribe itself is literally ripped apart by the consequences of the statistically most dangerous vices that plague reservations across North America, even as they outlive their colonizers.

The film is somber, sometimes oppressively so, with their gift of immunity being thought of simultaneously as a boon from earth or as a consequence of the earth forgetting they even exist, as so few of them remain at all. The cast meshes and bounces off each other wonderfully, ideals playing off of each other at almost every turn, the narrative more concerned with the human conflict than with gore and gratuitous headshots, as a good zombie film should be – not to say there is no gore to be had. 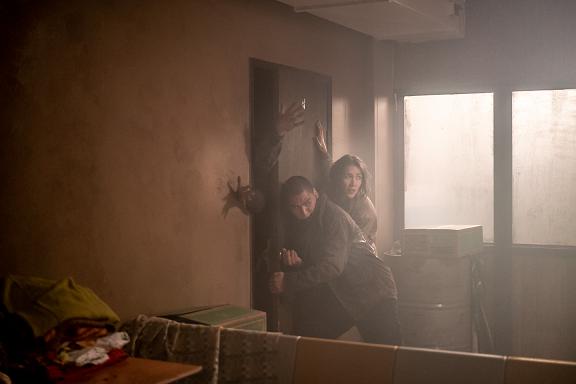 All this said, the runtime of one hour and thirty-seven minutes still feels a bit on the longer side. The action proper is very front- and back-ended, leaving a large slice of slow-moving dialogue and conversations in the middle. There are hints at potential issues or conflict in regards to the illness every so often, but they’re resolved fairly quickly, and unless something major were to occur, the knowledge that every single one of the Mi’qmaq is immune to bites does dull the tension a little bit. Lysol’s gang, so integral to the film’s climax, are barely entities, aside from their leader. Immediately after the film, I honestly struggled to remember the names of the other two, or if the names are even said, due to them being so passive and forced into the background throughout. However, when it works, it really works, and I would not let these issues detract too much from an otherwise extremely interesting film. 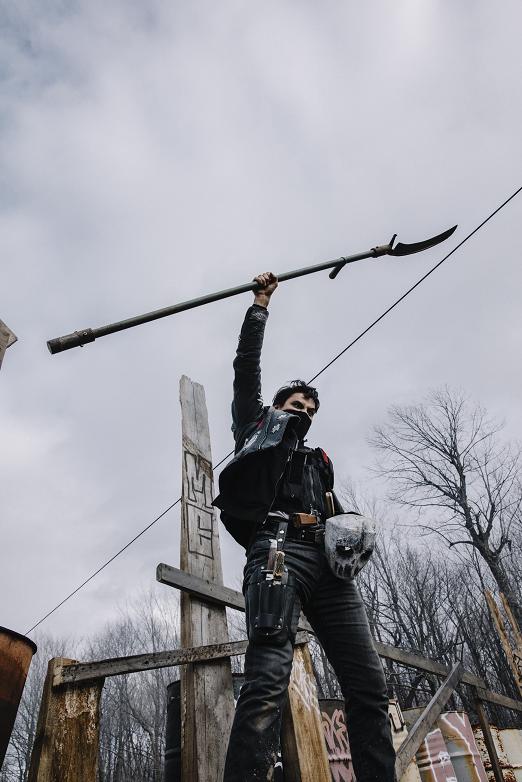 BLOOD QUANTUM should, and hopefully will, join the pantheon of modern zombie fiction masterpieces, along with the likes of 28 DAYS LATER and TRAIN TO BUSAN. Its viewpoint is wholly unique, relevant, and even necessary in our world as it stands now. Barnaby does an impeccable job fleshing out the conflict within the survivors of the reservation, keeping them flawed even at their best, and human and worthy of empathy even at their worst. In a genre full of death and trope-y conflict and cyberpunk disease labs, BLOOD QUANTUM is hauntingly natural, well-rounded, and refreshingly human.