It’s hard not to root for a scrappy film like DON’T RUN. Many people — honestly, most folks that don’t really obsess over movies or watch endless hours of footage from all levels of productions through the years — would probably be very quick to dismiss this no-budget indie. Whenever I tell them I just watched something new, my parents first question (without fail) is “Who’s in that?” I think it’s meant to help them place the title with ads for it, but given that they rarely remember most actors’ names it seems like an odd move. However, it also conveys a mindset of watching “movie stars,” memorable faces and recurring names paid a lot to appear in pictures with large budgets. So when a new release doesn’t have anyone famous and is clearly made without a lot of money, many people move away from it rapidly.

But there can be gold in them thar no-budget hills! You can find stuff like PRIMER or PI, and other indie delights that reveal true talents and outsiders’ perspectives. DON’T RUN isn’t a revelation mostly because its technical issues and storytelling problems bog it down, but it is clearly a passion project with some legitimately good ideas and moments of strong execution. Hopefully writer/director/producer Ben Rood is able to take this movie and use it as a way to another project, while learning from the pitfalls of DON’T RUN and constantly improving (as all artists must). 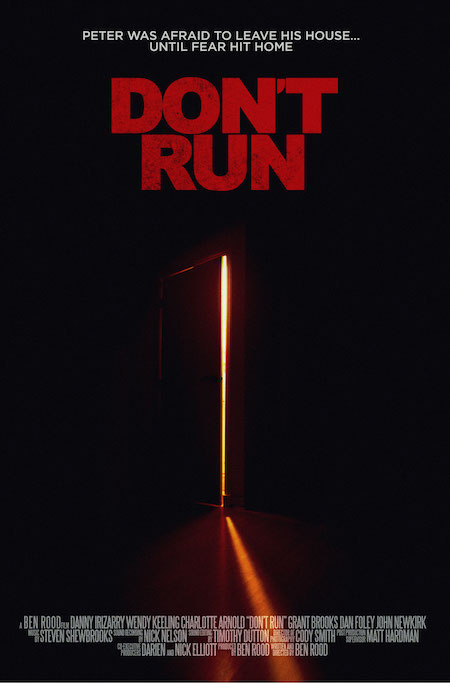 DON’T RUN concerns Peter (Danny Irizarry) and his mother (Wendy Keeling) moving to a new neighborhood to start life afresh. Peter is a moody teen and there is something about the father’s absence that is never directly discussed but clearly weighing heavily on the relationship between the son and his mom. After a first day of school where Peter is harassed by the local bully (Grant Brooks) and awkwardly swoons over the girl next door, Amy (Charlotte Arnold), Peter’s life is met with tragedy.

An evil presence then arrives in Peter’s home to tell the boy that there is a monster in his closet. If Peter runs, the monster will find him and kill him. As long as Peter is in bed by sundown, there won’t be any problems. After a few quick deaths of unfortunate people in the house after nightfall, Peter believes the masked man’s tale and has to figure out how to survive, if not outright escape, this claustrophobic nightmare.

Even though the film was made in 2016/2017 and took three years of postproduction, DON’T RUN ends up being fairly fitting for the times. Peter essentially becomes a shut-in due to an unseen monster that keeps him panicked and deeply afraid of the consequences if breaks the rules. That’s a scenario with which many of us can deeply identify in this age of COVID-19. Of course, in that case, the symbolism would suggest that the best recourse is to defy the rules and get outside with others…but still, it’s an unhappy but noteworthy confluence of fiction and reality matching up.

DON’T RUN and Rood have a lot going for them as it is based on a pretty common (if not universal) fear that strikes in youth. As a kid, many people (including me) would have the thought that if you switch off the light, you had to rush to the bed in the ensuing darkness or else be consumed by some horrific evil. It’s a clever idea to build the concept on this well-known and identifiable phenomenon, and you can see a lot of the stylish touches that Rood and his incredible small crew (maybe three to four other people, maximum) bring to the filmmaking that suggests their ambitions and visions. And onto that pretty game and natural performances from Irizarry and Arnold, and there’s some promise in DON’T RUN that shows the type of film Rood was aiming to make.

Unfortunately, it doesn’t quite work. The budget limitations actually don’t affect the finished project as much as people may expect—with the exception of not having time for reshoots or affording better color and light correcting software. DON’T RUN sets up a very clear rule: be in bed by sundown. If Peter is not in bed by nightfall, the monster will kill him (presumably through eating). There are a whole bunch of shots where it is clearly nightfall (or day for night) outside, and Peter is out of the house or walking around inside it while you see that it is clearly night outside through a window. Rood smartly does the storytelling move of showing consequences to other characters that defy the monster’s strict bedtime policy. But then DON’T RUN drops the ball, repeatedly, with these shots which immediately muddies the waters and doesn’t make a lot of sense.

There’s also an underdeveloped reasoning behind a lot of the action. While the audience can take the mental step that Peter doesn’t want to go far in case that’s “running,” why does he stay inside all day? If the monster only comes out at night, why does Peter (and a strange older man he finds on the internet — yikes — with the same problem) rely on people to deliver him food? DON’T RUN could have either ramped up Peter’s agoraphobia or loosened it over time, but instead it is kind of always at the same level.

Meanwhile, there are a lot of flaws in the script. There’s a feign towards something about psychiatric medication being involved in all this that is dropped like a bad habit pretty quickly. There’s the scene where two detectives show up to ask about disappearances and then Peter threatens to call the cops on them. He will call the cops on the police detectives and that is enough for them to scurry away. There’s a resolution to everything that is pretty irritating and a lack of mounting stakes and tension that leaves DON’T RUN on a pretty bland plateau for most of its running time.

But again, there are glimpses of talent and vision, and while Rood’s ambition far exceeded his abilities and budget — it’s always better that than the other way around, I suppose. There’s a nice use of lighting in some scenes along with some truly good shots. There’s a nightmare jump scare that is cheap, but very well executed and works even despite its obvious foreshadowing.

The few shots of the monster in DON’T RUN are enough to be creepy and imposing, creating a nightmare creature in the minds of the audience. And the bandaged man that arrives to explain Peter the situation is an almost Lynchian figure that is suitably creepy. Rood also has a legitimately fun running gag of a bad cop show (or action movie) that Peter is always watching on TV with outstandingly cheesy lines and one character who apparently has the catchphrase of “ay caramba.” These touches suggest that Rood has genuine talent that, with refinement and experience, can create something good (without any caveats or qualifiers).

During college, some filmmakers came to show their indie sci-fi movie. It was terrible. Afterwards, discussing it with my friends, most of us agreed it was bad but a couple kept arguing that the production had no money. But that wasn’t what I had an issue with — it was the things that don’t cost money that bothered me. The poorly written script’s lack of understanding of character arcs or attempts at creating real motivation or depth for any of them, and more. These areas aren’t considered part of producton value, and in fact can go a long way to gloss over any shortcomings another otherwise lackluster or no-budget movie.

DON’T RUN is miles ahead of that particular cinematic experience, but it is hampered less by its microbudget and more by its lack of finesse in execution and not playing to the strengths of what resources it does have, while stumbling on a narrative and screenplay level. A combination of LIGHTS OUT, DONNIE DARKO, and that episode of Are You Afraid Of The Dark? with the radio and closet beast, DON’T RUN has a lot of potential and moments that reveal a bunch of promise for Rood. So while DON’T RUN may not be a stellar movie and most people should probably pass it by, I still can’t wait to see what the filmmaker does next.

DON’T RUN is now available to watch on Amazon Prime.