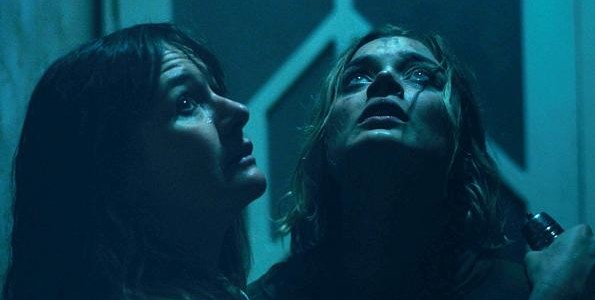 I have a recurring nightmare. In this nightmare, I am in my house, but I am lost. I know it is my house, but new tunnels have appeared, new doorways, and new rooms. I wander these halls looking for something familiar, only to be sucked even further into the depths of this literal dream home. I’d wake up, briefly confused about where I was, and if I was even awake. No matter how many times I had this dream, I always awoke from it confused and a little afraid. I haven’t had these dreams in a while, so I brushed them off. 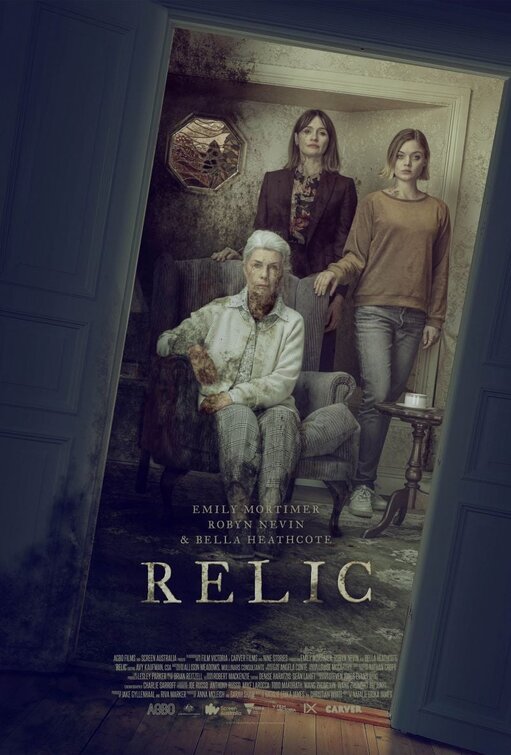 While RELIC is not solely about getting lost in your own home, James is skillful in infiltrating the subconscious and sinking her fingers knuckle deep into your darkest fears. And James doesn’t just make those fears scary; she somehow makes them beautiful. RELIC is beautifully tender, yet horrifyingly heart-breaking. It is a film that encapsulates the plethora of emotions contained in horror films, making you simultaneously want to cry and cover your eyes.

RELIC revolves around three generations of women: the ailing grandmother Edna (Robyn Nevin), the tired mother Kay (Emily Mortimer), and the stubborn daughter Sam (Bella Heathcote). Kay brings Sam to her childhood home after Edna, who suffers from Alzheimer’s, has been declared missing. After days of searching for her, Edna appears back home, uninjured but somehow changed. Strange sounds are heard around the house, and something seems to be looming over them all. The place where Kay grew up no longer feels like home. Something sinister lurks in the house’s depths.

The chemistry between these three phenomenal actors makes RELIC all the more effective. Nevin, Mortimer, and Heathcote feed off of each other to create this swirling concoction of love, resentment, and deep sadness, which are of course the three ingredients to any healthy family relationship. The mother-daughter relationship between Kay and Sam particularly captured my heart. Horror films are quick to pit mother and daughter against each other, whether it is the monstrous mother or the horrible child. But, in RELIC, the love between Kay and Sam feels genuine. Yes, Sam has dropped out of university and Kay is upset, but she never demeans Sam or pushes her away. She tries to be there for her daughter however she can, and has an open heart to what her daughter chooses to do in life. There are minor arguments, but there is never a moment of cruelty between the two.

Then there is Nevin’s performance as the slowly-declining Edna. In horror, perhaps the greatest punishment, besides death, is getting old. As you age, you inch ever closer towards death. An old character feels as if they are rubbing elbows with the Grim Reaper, becoming even more acquainted with that looming shadow. That means that often, the elderly are portrayed as monsters, and their age makes them an Other; they become almost alien. But in RELIC, Edna is given more respect than a stereotype. She is your grandmother, your mother, the family member who you hold so dearly to your heart, but she seems to be changing into something else. That transformation is both upsetting and horrifying to behold, a feeling you may understand if you have lost someone special in your life. Age is seen as more than monstrous. James portrays it instead as something beautiful, complicated, and devastating.

But there is a fourth “performer” who demands to be recognized: the house itself. While homes are described as characters in horror films, the house in RELIC is truly an integral actor in the story. It contains both the love and the decay of this family. It contains secrets. It contains multitudes. It lures you in with its pastel color palette and plush furniture. This is not your typical haunted house, but perhaps a house like your grandma’s. It feels inviting, warm, and full of nostalgia. But that house begins to slowly turn against the family. Its soft colors suddenly seem menacing at night, and dark rooms seem to carry something dangerous. Something is rotten in this house and it is starting to seep into the world.

RELIC is a stunning examination of family, love, and the crushing inevitability of death. It has one of the most devastating endings I’ve ever seen in a horror movie, one that will stick with you for hours after the film ends. James is not just interested in scaring you with RELIC. She wants viewers to just feel something so deeply, whether that is fear, sadness, or even both. This is a film that wants to sit in the back of your mind and nag at you during quiet moments. James has burst into the horror film scene with an absolute stunner, and I cannot wait for the stories she has yet to tell.