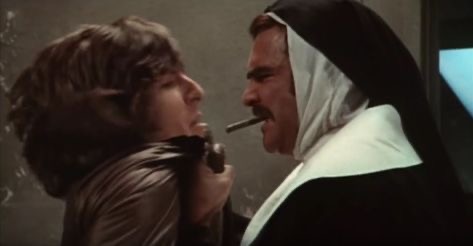 Burt Reynolds and Raquel Welch worked together a handful of times — first in 100 RIFLES (1969), then in FUZZ (1972), and again in 1993 in an episode of Evening Shade which Burt directed. Finally, they costarred in a 2006 movie called FORGET ABOUT IT, which everyone besides me has. (Yes, I’ve seen it.) Burt and Raquel are two of my all-time favorite movie stars, and for similar reasons. Both of them were worshiped as sex symbols upon their initial arrival, to a point where people overlook their importance to American cinema and their value as real-deal Hollywood stars, of the sort we don’t often, if ever, see anymore. Depending on which account you read, both of them also share reputations as being tough cookies offscreen. It’s a shame none of these projects really harness the insane charisma of these two stars at the height of their powers. FUZZ is fun in its way, but FUZZ ain’t it.

Based on the books by novelist Ed McBain (who wrote THE BIRDS for Hitchcock under his legally adopted name of Evan Hunter), FUZZ is a shaggy dog of a movie, about a bunch of detectives who are tracking a crimelord known as The Deaf Man. He is actually deaf, and played by Yul Brynner, in a bizarre but appealingly-bizarre bit of casting. Burt plays the alpha-male detective, in a quintessentially Burt Reynolds role, but Raquel, as she so often had to in guy-centric movies like these, played the sole woman in the group. The fact that she looks like Raquel Welch, again as per usual, is part of the plot, such as it is. This would be a dated movie by today’s sociopolitical standards, but Raquel does get to spar with the guys more than pretty much any other female star of the time would be able to do.

Interestingly, Burt and Raquel, while the clear stars of the film, do not play each others’ love interest, which is an echo of 100 RIFLES, in which Raquel was infamously and maybe progressively paired off romantically with Jim Brown. In FUZZ, Raquel hooks up with Tom Skerritt, ironically an actor who is nearly as recognizable with a mustache as Burt himself but who happens to have no mustache in this film. Burt, meanwhile, is married in the film to Neile Adams, then the wife of Steve McQueen. 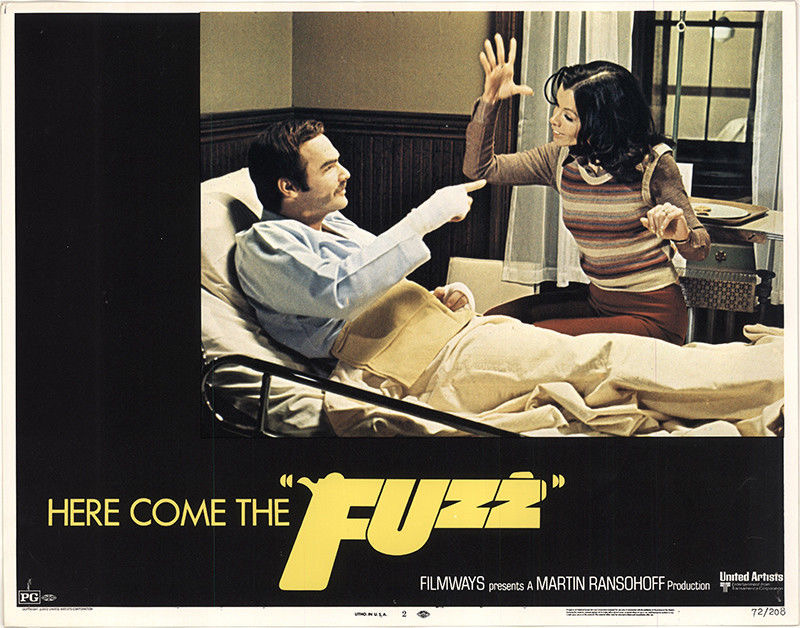 Burt with Neile Adams in FUZZ. 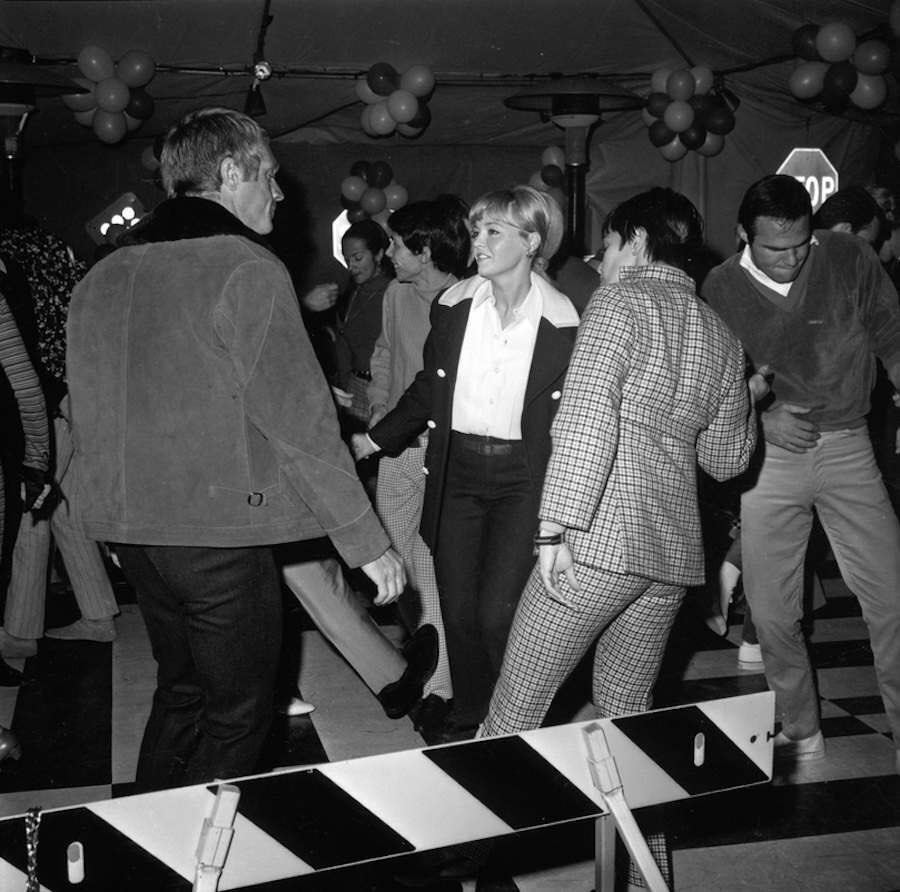 Let’s be honest, though: Burt’s love interest in FUZZ is character actor Jack Weston (as “Detective Meyer Meyer”). The majority of the fun to be had in FUZZ is the banter and camaraderie between Burt and Jack, and arguably the movie’s most memorable moment is when the two of them dress as nuns in order to catch a suspect in a public park. Beyond the evident enjoyment Burt got from old pros like Jack Weston, he also clearly understood from early on the value of pairing himself with adept actors of less apparent physical aptitude, from Dom DeLuise to Ned Beatty to Charles Durning. Burt’s best scenes in FUZZ also have Jack Weston in them. He re-teamed with him for his directorial debut, GATOR (1976). 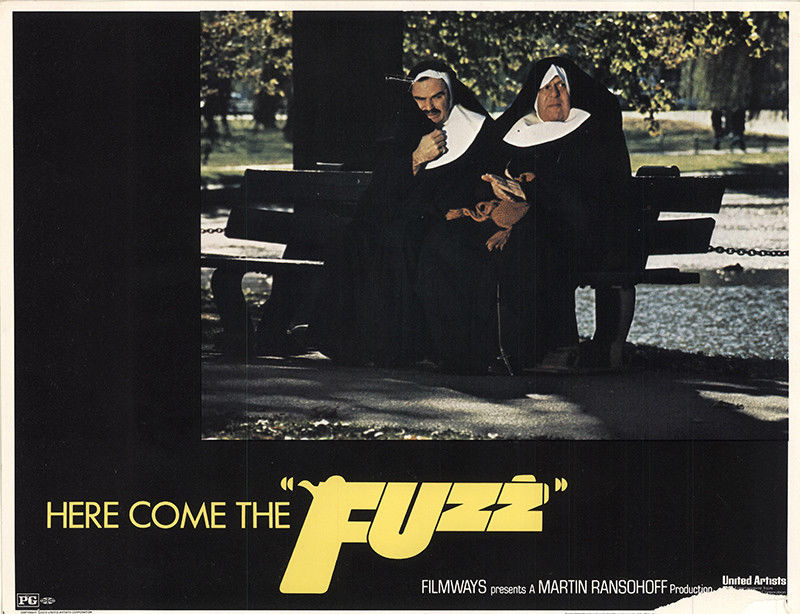 Again, in my opinion the pleasures to be found in FUZZ are piecemeal. Plot-wise, it’s a sprawl. That’s intentional, for sure. You’re supposed to enjoy watching these guys — and the one girl — at work. There were several workplace comedies like these throughout the 1970s. MOTHER, JUGS & SPEED comes most readily to mind. I love many of these films, but I also understand why the critical establishment has never regarded them as paragons of artistry. I still argue for their worth. This one in particular is remarkably valuable for the angle it provides on the stardom of Burt Reynolds — maybe less so for Raquel Welch. 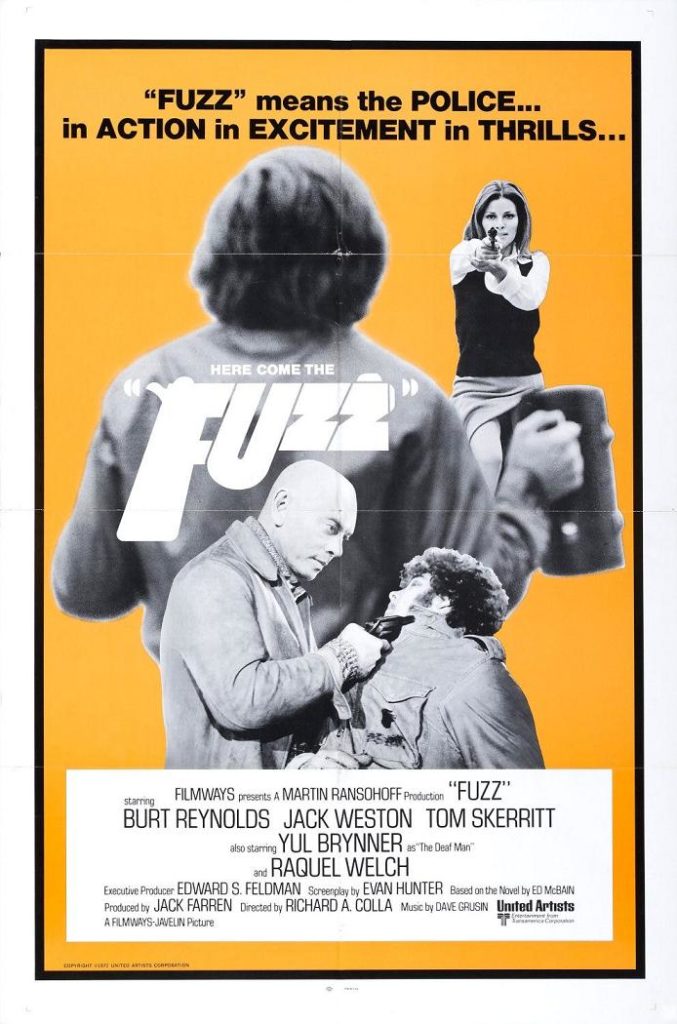 In the spring of 1972, Burt Reynolds was already a star. He’d been above the title of over a dozen films. But he wasn’t yet BURT REYNOLDS. He’d just come off his ABC TV series Dan August. Then he made the decision to pose for Cosmopolitan in a still-notorious centerfold. (Burt always maintained he did it for a laugh.) That was the April 1972 issue. FUZZ premiered in New York City on July 14th, 1972. Look at the poster. Look at the poster! 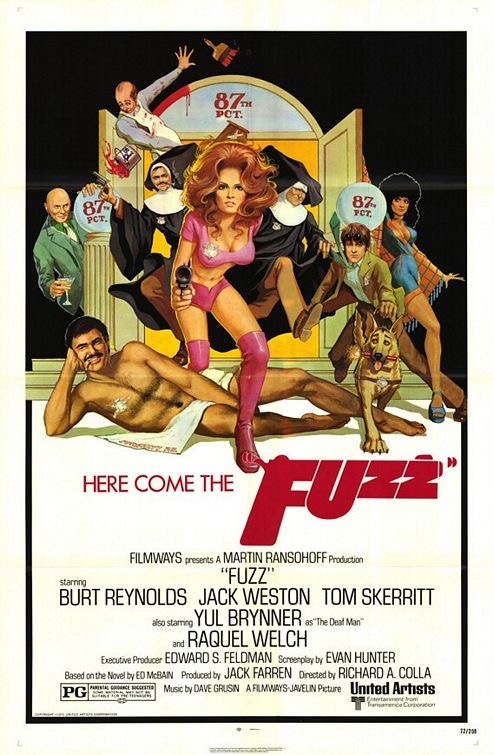 This is like one of those Thai movie posters that go out of their way to be as baffling as humanly possible. You’ve got Raquel bursting forth, dressed like Barbarella for no real reason, you’ve got Yul Brynner doing his best Paul Lynde, you’ve got Burt and Jack Weston dressed like nuns, and then you’ve got a second Burt, splayed out inconveniently in the middle of all that madcap prehistoric POLICE ACADEMY chaos. That Cosmo centerfold was so damn infamous, it made the freakin’ poster. For comparison, imagine if Tom Cruise was jumping the couch on the WAR OF THE WORLDS poster. Burt was really getting shellacked in the spring of 1972. And by the very same people doing his promotional imagery!

Thank God for DELIVERANCE. It came out on July 30th. Once people got a look at Burt in that movie, there was no doubt he was a real-deal movie star and no punchline. (Until the 1980s, when everyone turned on him again…) Raquel, for her part, was next seen in KANSAS CITY BOMBER, which opened on August 2nd. I’m a fan of that movie and especially of her in it. It’s a women’s picture in the old-Hollywood sense of the term, and Raquel is terrific in it. But it didn’t have the cultural impact of a DELIVERANCE, and Raquel never became the box-office draw Burt did in the late 1970s. She was more of a pop-culture personality, probably, which is a shame, because I maintain she was something special in movies and could have been even more so, given the right material.

All these should’ve-beens do exist, in an alternate universe engineered by me and by Hal Needham, but here in this reality, we have FUZZ, and it’s worth revisiting. Not every movie needs to be DELIVERANCE. Not every movie needs to be SMOKEY & THE BANDIT! Some movies are strictly of their moment, but seeing as how that moment is long past, these movies are the only way to go back and visit. And this movie is amiable-enough company for ninety-two minutes, particularly for a chance to get a look at two of the great and most unique American stars of the 1970s. 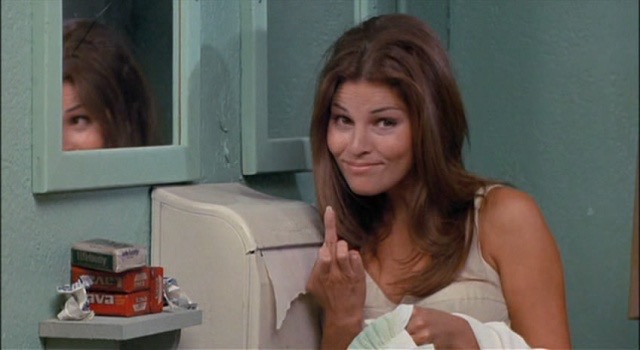