Carrie Fisher, writer and actress arguably best known for her portrayal of Princess Leia Organa in STAR WARS has died. She was 60 years old.

Before even taking the role of a princess in George Lucas’ 1977 space opera, Fisher was already Hollywood royalty. The daughter of Eddie Fisher and Debbie Reynolds, Carrie Fisher seemed destined to get in on the family business of show at 15 years old when she appeared in in the Broadway revival Irene with her Mother. “I am truly a product of Hollywood in-breeding,” Fisher quipped in her memoir WISHFUL DRINKING. “When two celebrities mate, someone like me is the result.” 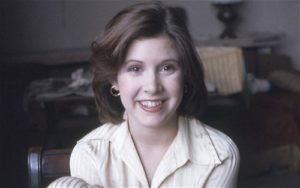 Fisher’s first credited film role is of Lorna Karpf in 1975’s political satire cum romantic comedy SHAMPOO before signing onto the role that would alter her destiny forever, Princess Leia Organa. Fisher portrayed the Alderaan princess over four more films, including last year’s THE FORCE AWAKENS. “Movies were meant to stay on the screen, flat and large and colorful, gathering you up into their sweep of story, carrying you rollicking along to the end, then releasing you back into your unchanged life, “ Fisher stated in THE PRINCESS DIARIST. “But this movie [STAR WARS] misbehaved. It leaked out of the theater, poured off the screen, affected a lot of people so deeply that they required endless talismans and artifacts to stay connected to it.”

Fisher continued acting outside of the galaxy far, far away appearing in such DAILY GRINDHOUSE favorites as THE BLUES BROTHERS (she even got engaged to Dan Aykroyd on set before getting back together with Paul Simon), HOLLYWOOD VICE SQUAD, AMAZON WOMEN ON THE MOON, and Joe Dante’s THE ‘BURBS but made a real name for herself as a writer.

In 1989, Carrie Fisher published the semi-autobiographical novel POSTCARDS FROM THE EDGE revolving around the fictional Suzanne Vale, a movie star coming to grips with her drug addiction. According to Fisher, the book was only loosely based around her life. “I’m not shocked that people think it’s about me and my mother,” Fisher told ENTERTAINMENT WEEKLY in 1990. “It’s easier for them to think I have no imagination for language, just a tape recorder with endless batteries.” Fisher adapted POSTCARDS FROM THE EDGE into a screenplay that was directed by Mike Nichols in 1990. She released several novels and memoirs including 2016’s THE PRINCESS DIARIST (which finally broke that she and Harrison Ford had an affair on the set of the original STAR WARS), 2008’s WISHFUL DRINKING, and 1993’s DELUSIONS OF GRANDMA that showcased her biting humor and deft self-deprecation. 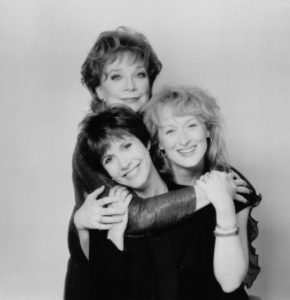 “There is no point at which you can say, ‘Well, I’m successful now. I might as well take a nap.” Fisher continued her career in another venue and was also one of the most sought after script doctors in Hollywood, known for punching up dialogue on LETHAL WEAPON 3, SISTER ACT, OUTBREAK, and Steven Spielberg’s HOOK (which the actress had an uncredited cameo in, kissing George Lucas). Princess Leia herself—who polished some of the dialogue in EMPIRE STRIKES BACK and helped Alec Guinness get into character with a short story she crafted on STAR WARS—was brought in to help Lucas with the prequel trilogy. Even Leia herself couldn’t help much on that one, but nobody bats a thousand.

For countless boys and girls of a certain age, however, Carrie Fisher will always be Princess Leia. For this writer, I can count her as my first crush. I can’t pinpoint a moment where it happened, but growing up with one of the first VCR’s on the block, STAR WARS was in perpetual rotation in my parent’s basement. I had the film memorized by the time I was four and would cry when it was over…every time. If STAR WARS was the closest thing I had to religion in my household than the print of the iconic 1977 Hildebrandt poster that hung over the stairs to the basement was like that Footprints prayer. Princess Leia was probably the first woman I could recognize outside of my immediate family, clad all in white (not that trashy bikini) like an angelic vision with a sassy mouth. It was an intangible thing that—much like Han Solo influenced my taste in navy Harrington jackets—has drawn me to smart aleck, funny, brunette women who would sooner shout “Get into the garbage chute, flyboy” than whine about a broken nail in the TEMPLE OF DOOM. Carrie Fisher as Princess Leia taught many young men how to adore strong women who have got everything under control. When Luke Skywalker first meets the Princess in Detention Block AA-23, she has a look on her face as if to say, “well its about time you two moon jockeys got here, I didn’t want to have to escape all by myself.” As much as I observed Princess Leia from “the male gaze” growing up, and even today, I admired her and wanted to be as cool as her too. Honestly, she gives Han Solo a run for the money in the rescue department. You can be 100% cool and a knockout in white go-go boots. She was a feminine, tough, funny, action heroine that could appeal to everyone—boy or girl. 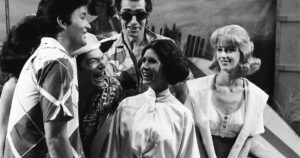 Alas, Carrie Fisher is gone, and it’s not the fault of “2016” or some sort of higher or lower power. To quote a lesser piece of Lucasfilm history, “we seem to have reached the age where life stops giving us things and starts taking them away.” I’ve been accused of being too pragmatic about death, but now is not the time to mourn, now is the time to celebrate art and life. Fisher shared a similar conceit, telling ROLLING STONE that she was “not happy about being older, except what are the options?” She knew that despite her vast career “Princess Leia will be on my tombstone. “So, pick up her books, go watch that episode of LAVERNE & SHIRLEY she appeared on. Carrie Fisher—and General Organa—would have wanted it that way.

“You know what’s funny about death? I mean other than absolutely nothing at all? You’d think we could remember finding out we weren’t immortal. Sometimes I see children sobbing airports and I think, ‘Aww. They’ve just been told.'”