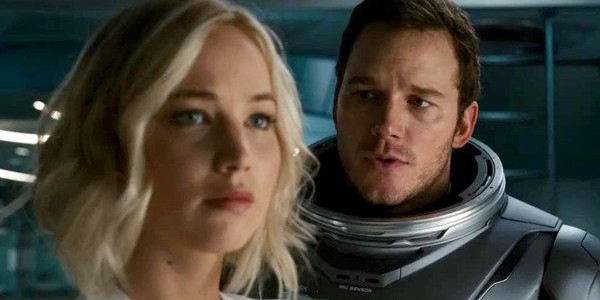 Depending on your beliefs, what lies beyond our solar system is infinite; the possibilities of what exists beyond what we can see and grasp is endless. I love movies about space exploration, traveling to other universes, and just about any film involving a spaceship. This sub-genre of science fiction really allows the filmmaker to be as creative as they want while still working within the constructs of reality. It’s why I get so excited whenever I see a movie poster where the character is wearing a space helmet, and also why I was vastly disappointed in PASSENGERS.

The film takes place deep into the future. Civilization has reached the point where interstellar travel is a consumer-based business and corporations like Homestead have “Quadrillions” of dollars in revenue from selling tickets on their spaceships and homes (land I’m assuming) on new planets. Jim (Chris Pratt) and Aurora (Jennifer Lawrence) are among 5,000 passengers (and 258 crew) that have purchased rides on a Homestead vessel, where they will sleep in hibernation for 120 years before their arrival at their new home. 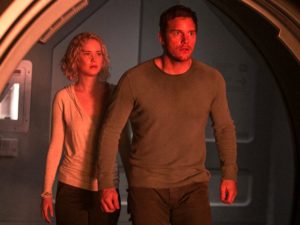 Only 30 years through their trip, the ship hits some turbulence and Jim’s hibernation pod malfunctions. He wakes up, realizes he is alone, sends an SOS to customer service that he won’t get a response from for another 55 years, then does what any of us would do, he finds the nearest bartender (an android played by Michael Sheen) and starts his decent into madness before deciding, after a year alone, he needs some company.

This is clearly a love story, obvious early on in the film. But it is a dark one; something the film doesn’t spend enough time emphasizing. Jim is trapped on this ship alone, with no way to contact home and no way to go back into hibernation, of course he’s going to go mad. But rather than showing us the darkness this reality truly would present (minus one predictable example), we are given a montage of Jim playing basketball, video games, upgrading his living quarters, and overall, giving us his best Home Alone impression. We are sold Jim as a cool, fun dude (I’m sure he is) rather than Jim as any normal human that is about to go insane from his isolation, because at it’s core, this is a love story.

But it’s an extremely fucked up love story – and I wish the filmmakers would have focused on this. There is a really good story here, a man is alone in space and is faced with an incredible dilemma – whether or not he should wake up other passengers to cure what ails him, or live out his days in space by himself. He does, I think, what any of us would do when pushed to our breaking point. But I wanted to see him break, so I could empathize with the character more. Add the eventual Stockholm syndrome that occurs with Aurora, and I think there is a really cool, deeply troubled story that would have made this film more exciting had the filmmakers taken advantage of it.

What could have been an excellent psychological thriller (in space!) turned out to be just another uncomplicated love story (in space!). I didn’t expect Chris Pratt to become Dicaprio overnight, but I was hoping for a dark and serious turn in this film (this is not on Pratt though, as the material he’s given doesn’t offer him the chance.) Lawrence isn’t given much to work with either. There aren’t even any visuals or cool special effects to help you get over the simplicity of the plot and dialogue. You’ve seen and heard all of this before. 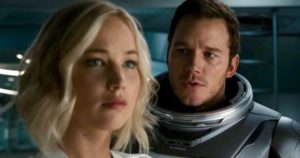 I love big-budget blockbusters for what they are, but usually those films lack any sort of real human emotion to begin with, which is why I was so dissatisfied in this one. It squandered an opportunity to be a very exciting, thrilling film so it could instead appeal to the masses during the holiday season.