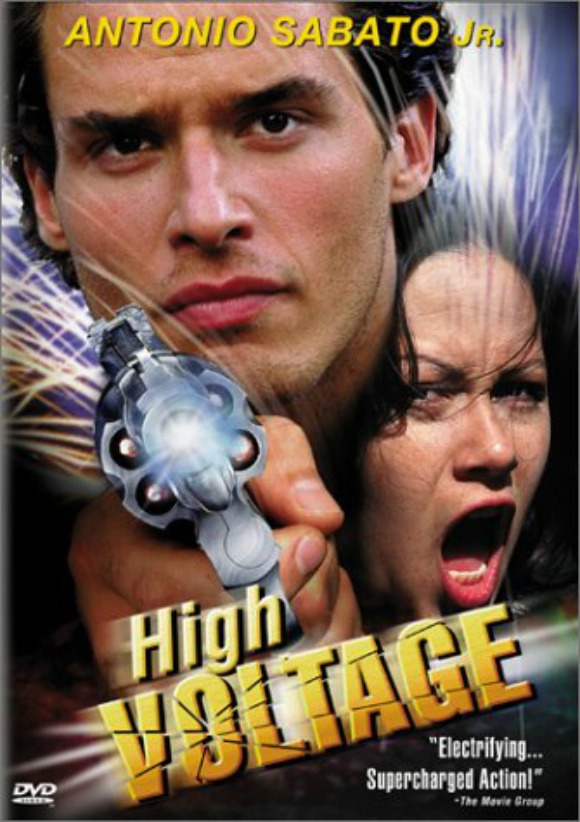 I love direct-to-video movies. Sometimes. I’ve been seeking out and writing about DTV for more than a decade, and I kinda made it my specialty. Alot of them are barely watchable, but the fun ones have qualities that you can’t find in the bigger budget movies. Before Emperor Netflix ordered the death of all video stores DTV movies were the true independents. If they had Seagal or Dolph or a giant snake or kung fu in them then they’d pre-sell X number of copies to the Blockbuster chain and the job was done. It didn’t even matter if nobody ever rented the movie, the producers were already in the black, so they could do whatever crazy shit they wanted, if they wanted. DTV became a refuge for the action stars of the ’80s and ’90s that the mainstream has turned on, but who some of us still want to see. It became a place for sequels to movies that weren’t popular enough for “real” sequels, like DARKMAN, STARSHIP TROOPERS and FROM DUSK TILL DAWN. And there was no guarantee, but there was ample opportunity for idiosyncratic, sometimes bizarre movies like Seagal’s collaboration with Ching Siu Tung, BELLY OF THE BEAST or at least OUT FOR A KILL, the one where he plays a professor of Chinese archaeology at Yale.

DTV became the new drive-in, and I always thought there should be a crop of directors like there were in the Roger Corman days, hungry young guys who would take advantage of the lax oversight to do something better and more interesting than expected. Now days there are a few of those, and though they haven’t broken into big-budget-theatrical yet at least one of them (John Hyams) has caught the attention of many critics who I didn’t know were into that sort of thing. But the first stand-out DTV director I ever noticed was Isaac Florentine.

I caught on after UNDISPUTED II, a superior sequel to a boxing movie I never really liked even though it was directed by Walter Hill, had a great performance by Wesley Snipes and a major role played by a host of Yo! MTV Raps. I went back to Florentine’s earlier ones and enjoyed US SEALS 2, SPECIAL FORCES and BRIDGE OF DRAGONS. Since then he’s topped himself with NINJA and UNDISPUTED III. But somehow I missed this one from 1997, his third feature length movie, and his first after directing a ton of Power Rangers episodes. 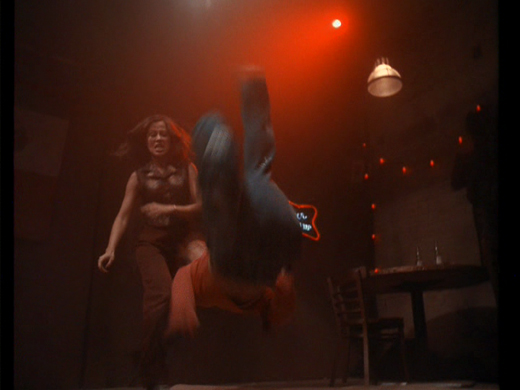 HIGH VOLTAGE is one of the few Florentine joints to lack a martial arts star lead like Scott Adkins, Van Damme, Dolph, Michael Jai White or at least Gary Daniels. This one’s about a crew of bank robbers, and they do fight in a martial arts style, but they’re played by actors Antonio Sabato Jr., Amy Smart (her first besides a TV movie where Bonnie Bedelia and Brian Austin Green play lovers), Lochlyn Munro and Mike Mains (who wrote the script). Bruce Lee’s daughter Shannon is in a major role and she does get to fight but mostly she handles the acting in this one.

I thought she was only gonna be a cameo, because she’s the manager at a small bank the crew tries to rob at the beginning. Their plan to steal only small bills goes sour when the vault holds nothing but hundreds, because it’s actually a front for the Vietnamese mafia. To be safe they don’t take the money, but this is the type of gang where the boss will act like he forgives you for screwing up and then suddenly strangle you with his fancy silk scarf. So just the insult of the attempt puts the gang on the death list.

Lee is sympathetic toward them even during the robbery – you can see it on her face – and she wants out. So Sabato goes to her and they make a plan for robbing, killing, hiding out, etc.

Also they go to a bar with a duffel bag of money and have to protect it from bartender Donald Gibb, a.k.a. Ogre from REVENGE OF THE NERDS.

Not everyone is gonna make it out alive. If you guess at the beginning that Sam (the kinda weinery guy played by the screenwriter who looks like the guy who does the voice for Spongebob and they make a big deal about how much Amy Smart is in love with him and they’re gonna get married) is gonna get shot and die… well, you will be right (spoiler). There’s a pretty crazy part, not sure if it’s supposed to be comedic or not, where they drag the dead body to a priest and make him marry them at gunpoint. They also dig him a grave and continue to mourn him throughout the movie. When they go get help from an ex-boxer friend of Sabato’s father (a good tough guy role for Sabato’s actual father, who looks like a cross between Arnold Schwarzenegger and Ernest Borgnine) he notices that Sam isn’t there and is sad about it.

All this made me feel sorry for the getaway driver who got killed during the robbery. Nobody even mentions that guy again! 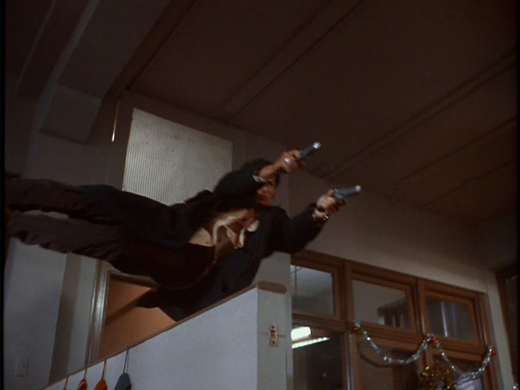 Florentine was definitely thinking John Woo on this one. There are many scenes where Sabato and others slo-mo launch themselves in the air and glide sideways while shooting two pistols. And I’m all for it. They slide across tables and floors, shoot apart walls and furniture, blast people through windows. Of course there’s also a big (not convincingly motivated) Mexican standoff. It was the ’90s, that’s how you did it back then. That’s how you established criminal legitimacy in movies.

These characters also enjoy sunglasses, cigarettes and toothpicks. But the cast is a problem here. No offense but the dudes besides Sabato all look like the comic relief character. Just because Lochlyn Munro was in UNFORGIVEN doesn’t mean you can turn him into Chow Yun Fat. Woo is all about amplifying a man into an icon, but these men are lost causes in that department. Also, putting a handkerchief on the head of the bad guy from THE KARATE KID and calling him “Bulldog” isn’t enough to turn him into a convincing dangerously-out-of-control-biker. (And if the name’s supposed to be a reference to Mad Dog in HARD BOILED then give him an eye patch!) 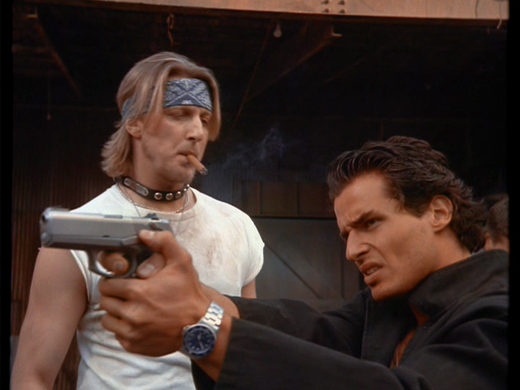 But this is also a movie in the martial arts tradition, and Florentine and his stunt men make the best of this cast. There’s a high volume of very energetic action, never too repetitive and with alot of faith placed in that great old trick of having dust fly off of every table, floor or person that gets punched, stomped or slammed. There’s also a chair that gets kicked and slides across the floor, which is a favorite gimmick of mine that Florentine also uses in a great fight in SPECIAL FORCES. And there are far-fetched moves like Sabato running up a wall and jumping off to shoot a guy, or Lee stomping on a board to catapult a gun so that Sabato can leap across the room onto the floor and catch it in the air just in time to put a bullet in the bad guy’s forehead before he pulls the trigger on her.

The biggest noticeable influences besides Woo are Sergio Leone and Florentine’s own work on Power Rangers. There are lots of little bits of visual storytelling, all told with facial expressions and cuts and little ADRed grunts and sighs. This must come as second nature to a guy used to filming people with face-covering helmets doing kung fu and adding dialogue later. It adds a cartoony feel to this era of Florentine (there’s even one involving a biker dude sitting on a toilet and spying on important information through a peephole). But I think all the time Florentine spent doing these type of scenes is what gave him the seemingly effortless control of cinematic language that he has now and that so many of his peers lack. Maybe I’d know what the fuck was going on in today’s action movies if their directors had started out on Power Rangers instead of commercials.

In other ADR news, a couple of Amy Smart’s scenes (including the opening scene) seem to be dubbed by a different actress. She must’ve had to leave town to be in STARSHIP TROOPERS or something.

The one thing I really hated in the movie is the repetitive score by Stephen Edwards. He’s gone on to do almost all of Florentine’s movies, and usually does a good job. But here he’s trying to do some kind of cutesy spy movie meets spaghetti western thing, which not only emphasizes the corniness of the material but sounds shitty done on keyboards.

This is not a funny-bad movie, and I can’t claim it’s very legitimately-good either. But I enjoyed the energy and enthusiasm put into the many action scenes, Sabato Jr. is okay, Sabato Sr. is cool, Lee is pretty good. For completists like me it’s an interesting look into the development of Isaac Florentine, King of DTV.

Oh, and I have no idea why it’s called HIGH VOLTAGE.