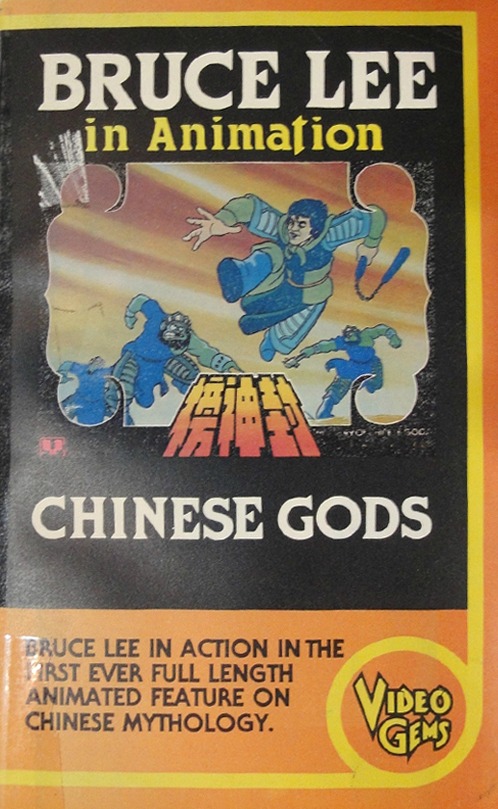 After the death of Bruce Lee in 1973, filmmakers in Hong Kong, Taiwan and around the world knew it was their solemn duty to console the masses by keeping the spirit of The Dragon alive on screen. By that I mean they knew it would be easy to confuse white people with new movies that sounded like old Bruce Lee movies. A parade of semi-lookalikes showed up under names like Bruce Le, Bruce Li, Bronson Lee and Dragon Lee, starring in fake sequels (ENTER ANOTHER DRAGON, RE-ENTER THE DRAGON, ENTER THREE DRAGONS, ENTER THE GAME OF DEATH), new Bruce Lee adventures (BRUCE LEE VS. THE SUPERMEN, BRUCE LEE IN NEW GUINEA) and quasi-biopics (BRUCE LEE: THE MAN, THE MYTH).

It’s a weird phenomenon, isn’t? We’re used to the avalanches of posthumous unfinished recordings from Tupac and other deceased artists, but fake-outs by imitators might be unprecedented. We didn’t get Keith Ledgings starring in KNIGHT OF THE JOKER. We didn’t get Brandon Li. Few humans are as iconic as Bruce Lee, I guess. Maybe if The King had died younger we would’ve had Elvis Preslee in JAILHOUSE ROCK 2.

One of the most enjoyable movies of this type that I’ve seen is THE CLONES OF BRUCE LEE, which teams Dragon Lee, Bruce Le, Bruce Lai and Bruce Thai (plus Bolo Yeung) in an EXPENDABLES of Bruceploitation where a government scientist makes clones of Bruce Lee to send on dangerous missions. It’s funny to see them all together (and later fighting each other) and realize they don’t look like each other at all.

The most disappointing one I’ve seen is BRUCE LEE FIGHTS BACK FROM THE GRAVE starring Bruce K.L. Lea, because it has nothing to do with Bruce Lee fighting back from the grave. They don’t even call the guy Bruce, let alone act like he’s Bruce Lee back from the dead.

Anyway I recently came across a weird exploitation of Bruce Lee that I didn’t know about before, a 1976 animated film called CHINESE GODS or STORY OF THE CHINESE GODS. The clamshell cover of the rare VHS release from Video Gems makes it look like the title is “BRUCE LEE IN ANIMATION: CHINESE GODS.” It’s also available in a 10-film Bruceploitation DVD set called Dragon Immortal.

What is this? Not a Chuck Norris Karate Kommandos or Mister T type Saturday-morning-cartoon-based-on-a-real-guy’s-persona. It’s an adaptation of Chinese myths with one of the characters drawn as Bruce Lee. It’s as if it is a cartoon based on a live action fantasy movie where Lee played one of the roles. I appreciate that the voices on the English dub sound like the voices from dubbed kung fu movies, not from anime. That adds some small amount of authenticity.

To my eyes it’s a completely befuddling cartoon, although it would probly make more sense to someone more familiar with the culture. The story has something to do with the Chinese Gods coming down from the Heavens to help the people deal with an asshole King guy. But the asshole King guy summons a bunch of demons to help him oppress the people or whatever. There’s a lady who gets burned at the stake because she’s actually a demon with a guitar for a head.

There’s another demon who’s a little boy with pointy ears and either a party hat or a drill on his head, kinda looks like one of the guys from PUPPETMASTER. He hides underground. Actually he seems kinda harmless.

There’s a guy who makes his head disconnect and float around, and challenges another guy to do the same. Instead a bird man flies in and holds the flying head by the ear so it can’t get back to the body, and he cries. That’s the kind of movie we’re dealing with here, a flying-head-birdman-biting-his-ear-and-he-cries type movie.

Cartoon Bruce Lee finally appears toward the end. He’s an armored god-warrior with a third eye capable of firing magic energy beams, but he’s definitely drawn as a caricature of Bruce Lee. He doesn’t talk, but does do Lee’s trademark battle squeals and his less famous thumb-across-the-face mid-fight sweat-wiping gesture. They draw his arrogant smirk pretty good. I don’t think they capture his fighting style accurately with their weird, rubbery movements, but it seems like they’re trying. He does get to use nunchakas. There’s even a slow motion part. No quick zoom-ins to the face, though. That would’ve been cool.

Alot of people in this movie like to throw snakes as weapons. And who doesn’t? One of them turns giant and eats Bruce, so he has to use the snake’s (heart? tonsils?) as a punching bag to get out.

This could be called BRUCE LEE VS. WEIRD TRANSFORMATIONS. There’s a woman who suddenly turns into a fox with nine tails, so Bruce appears and fights her for a long time. He transforms himself into Siamese triplet Bruce Lees, two with swords and one with nunchakas. He picks her up by one or more tails and spins her around. He chops off all her tails. The tails fly around and then transform into flaming fox heads, which continue to attack him.

Eventually Bruce becomes a dragon. That might sound appropriate on paper, except this is the dragon he turns into: 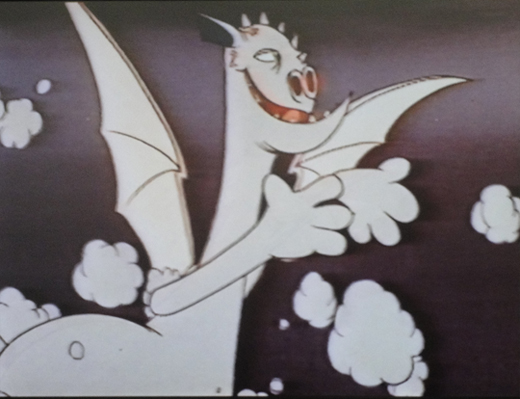 I mean, come on. That is not the dragon that enters and returns and everything. This is actually one of the movie’s biggest weaknesses besides incomprehensibility. The main characters seem influenced by Chinese paintings, but the extras and animals are much more cartoony and sometimes look pretty stupid.

Oh well, at least Bruce gets to magically roid out: 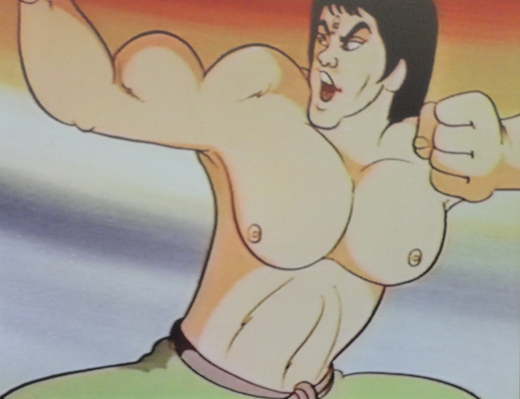 Watching this reminded me of all the times in the past decade or so when there were rumors of the Lee estate authorizing his likeness to be used in “new Bruce Lee movies” using computer animation. The technology is now available that they could do it with some amount of realism, but what would be the point? No animator or motion capture stunt person could truly capture the physicality of Bruce Lee, nor do I believe they would appropriately honor his philosophy or the exacting attention to fight choreography, staging and editing he practiced in WAY OF THE DRAGON and the scenes he shot for GAME OF DEATH. In that sense maybe these cartoonists actually had the right idea. You can never re-create Bruce Lee the man. The best you can do is Bruce Lee the god who can fly and multiply and turn into, uh, Puff the Magic Dragon.

I can’t really recommend seeking out CHINESE GODS, but I was up for an oddity. At least I’ve never seen anything like it before. Appropriately, the tape ends with a trailer for BRUCE LEE THE INVINCIBLE starring Bruce Li. It doesn’t look like a very good one except for the fight against a guy in a gorilla costume.

P.S. If you have time, check out my new outlawvern.com event THE SUPER-KUMITE, a tournament of fighting tournament movies.