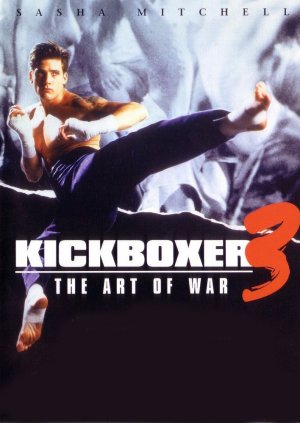 You know what, I’ve been breaking my back trying to name this column every week, it turns out the projectionist or whoever runs Daily Grindhouse already named it “Outlaw Vern Presents.” And who am I to argue with that? So welcome to this week’s edition of Outlaw Vern Presents, formerly Four-Fisted Tales, formerly Tough Tuesday, formerly Feet of Fire Fists of Flames, formerly Tape Trek, formerly America’s Got Punching, formerly Journey To Battle Island, formerly Vern’s Punch-Quest.

Originally I watched KICKBOXER 3: THE ART OF WAR thinking it would be part of The Super-Kumite , my tournament of tournament fighting movies. I thought I could have the different franchises like BLOODSPORT and BLOODFIST and everything pitted against each other, but I didn’t take into account how many of the sequels (including this one) would abandon the tournament format for other templates. Apparently a tournament with Tong Po happens again in KICKBOXER 4, but 3 and 5 use different formulas, in this case a highly competitive championship match.

I assume you all are very familiar with the first film in the series, one of the classics of the Jean-Claude Van Damme oeuvre. (I know that’s a fancy word, but in my defense I tried three different spellings before I got it past spellcheck.) Van Damme played Kurt Sloane, a fighter avenging the paralysis of his brother Eric Sloane (Dennis Alexio). Since Van Damme didn’t appear in part 2 they killed off Kurt using a double, and introduced a third brother to avenge him, David Sloane (Sasha Mitchell). To make it legit, David works with Kurt’s mentor, Xian Chow (Dennis Chan).

When I wrote about KICKBOXER 2 several years ago I said ‘The director is Albert Pyun, but I never would’ve guessed that because it’s both watchable and kind of good.” To my embarrassment and delight Pyun himself showed up in the comments to self-deprecatingly talk about his movies. Check it out some time, it’ll make you like him. 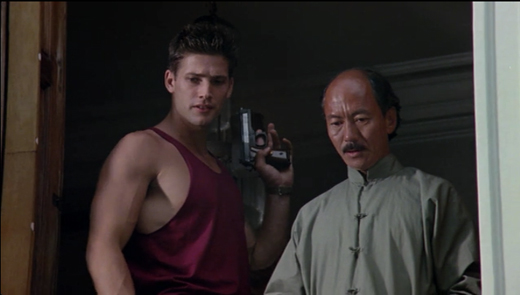 Both Mitchell and Chan return for part 3, directed by Rick King (PRAYER OF THE ROLLERBOYS). I remember that I liked them in part 2, but I forgot what this David Sloane character was like. He’s kind of a laid back Valley meathead, seems very nice but slow. Reminds me of Freddy Prinze Jr. or Chris Klein more than JCVD. He’s in Rio de Janeiro to defend his Light Heavyweight World Kickboxing Championship title against Martine (Ian Jacklin, AMERICAN STREETFIGHTER). First he sees Martine in an exhibition match, proving himself a real asshole and bully. This guy is also affiliated with a sleazeball American club owner named Lane (Richard Comar, SHORT CIRCUIT 2). I’m against this guy because he kidnaps street kids and uses them as prostitutes for the rich dudes who come to his resort. And he rules them with an iron fist – in the opening scene a girl who tried to make a run for it was brought back and shot on a couch in front of the other girls, as an example. And I mean, who am I to judge a man, but in my opinion you’re WAY out of line there, pal. You need to cool it.

Well, Sloane doesn’t know what’s up when this guy introduces himself, apologizes for his fighter being a dick and invites him to his club. So he enjoys the perks of being the champ and accepts the offer.

I should mention his new entourage though. He arrives with just Xian, but while dining outdoors a little kid steals their camera. Sloane chases the kid, has to fight some locals, gets a switchblade pulled on him. “Next time I’ll kill you!” the kid says. I like that they don’t try to make him adorable, he actually wants to murder the hero. Sloane’s response: “Hey, you got a serious attitude problem, kid. You gotta work on that.” And he takes his knife.

The kid turns out to be named Marcos (Noah Verduzco, D2: THE MIGHTY DUCKS), and he shows up back at the cafe with his older sister Isabella (Alethea Miranda) saying he needs his knife back or he’ll get killed on the streets. Sloane makes peace by buying them lunch and returning the weapon, and everybody’s friends. Or so Sloane thinks – afterwards the kid steals the camera from his dumb ass again.

Now this girl Isabella looks about 15 or 16, so it’s real creepy when she comes to the club with Sloane and that scumbag Lane starts making eyes at her. I mean obviously in a recruiter type of way, and he can’t top Matt Schulze drugging Steven Seagal’s young pen pal in OUT OF REACH, but still. It’s gross. After that business there’s really no need for the other level of villainy which is when they’re all in the limo and Lane starts talking about paying Sloane to throw the fight. Sloane rightfully tells him off, so the limo pulls over on the side of the road and they have to walk.

The impressive thing about this movie is how it gets in the sporting events but also the shootouts and shit. Part BEST OF THE BEST, part BEST OF THE BEST PART 2. Lane not only kidnaps Isabella and turns her out, he also forces the champ to perform a series of grueling physical tasks. He has to run up a hill carrying a bunch of rocks while being shot at, he has to dig a bunch of holes, he gets dumped off a boat in the middle of the ocean and has to swim back, he gets dragged behind a speed boat. The idea is that all this will wear him out before the match, but the funny thing is, with different music this would be a training montage. Have these bad guys taken into account that they might really be helping Sloane get the eye of the tiger? Have they seen KICKBOXER? Kicking trees, fighting underwater and getting heavy objects dropped on his stomach was what got him ready to win.

Well, I guess the rules of the KICKBOXER universe have changed. In this one these types of things make you tired instead of strong. But he overcomes it because he’s “Incredible. He’s like a machine,” and because Xian catches a snake with his bare hands, makes Sloane drink the venom, and puts mud all over him. 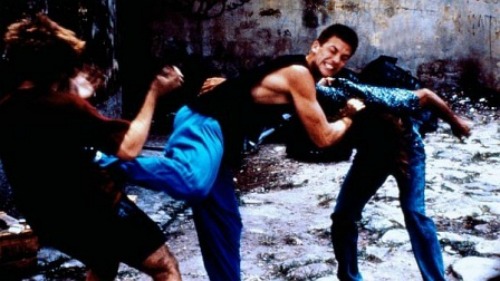 So you can guess what happens in the championship match, but more importantly these two decide to go vigilante and free the child prostitutes. For unexplained reasons they’re really good with guns and have absolutely no qualms about breaking into a mansion and killing a whole bunch of people. They first go after a businessman who finances the operation or something. His priceless justification: “Kids are more mature now, man. It’s the ’90s, pal!” Then they go after Lane. They bankrupt him, beat him up and the kid stabs him, and the fuckin guy still doesn’t get it. “How could this happen?,” he asks. That’s the best, man. Usually the villains try to take it in stride, give a defiant smile as they blow up, something like that. This guy wants to know what went wrong.

Of course, Marcos, having committed the revenge murder of his dreams, finds out it doesn’t feel as great as he’d expected. So Sloane channels his inner YMCA mentor to say “Killin someone never makes you feel good. C’mon, let’s get outta here.” I guess he figures that one sentence with no pause for reflection will suffice for working on the “serious attitude problem” he noted earlier.

I miss the fighting tournament formula, but this is a fun movie with a good balance of hatable villainy, goofy heroism and weird touches like the reverse training montage. And it’s not a bad use of Rio – they get in a little beach capoeria, some pretty good Brazilian music, and a message about American tourists participating in the exploitation of the native poor. I hope Sloane and Xian don’t have to come back for any more title fights, though, because I’m pretty sure they’re wanted for a couple dozen murders now.