After reading this press release my morning spit-take is complete. Why is director James Bickert (DEAR GOD NO!) on my short-list of directors to keep an eye on? Because the naughty as fuck nature of this press release is the same kind of balls out crazy he puts into his film. Bastards and Bastardettes, I give you a contest that’s in a race for the bottom… or should I say panties…. 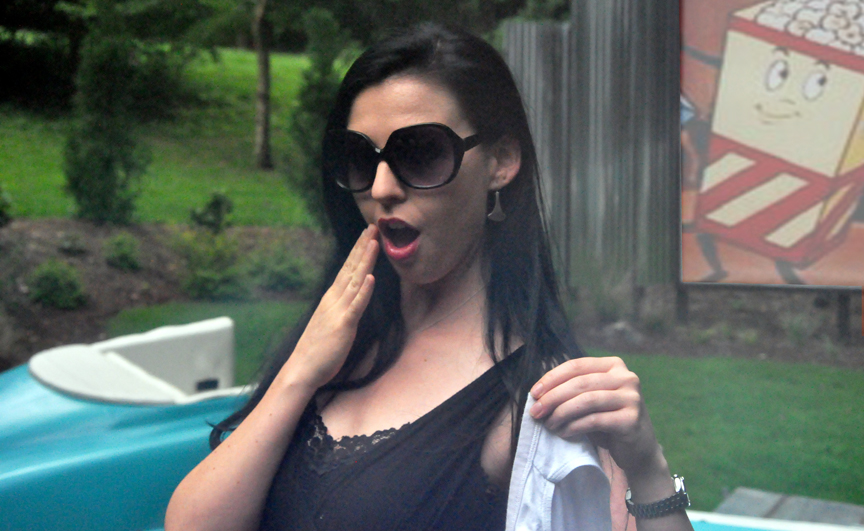 Producers of DEAR GOD NO! Sink to an All-time Low

Atlanta – July 18th, 2012 – Greedy noses rejoice! They survived bikers, waterfalls and Bigfoot! Will they survive your untamed thirst? The smut peddlers behind the cult drive-in throwback DEAR GOD NO! are proud to announce an exciting new contest offering the raincoat crowd a chance to win the bloody screen used panties of glamorous exploitation star Madeline Brumby. Stripped off her bare naked figure at an undisclosed exotic location and sealed for maximum freshness these undies promise all the heavenly taboos needed to fill the darkest of carnal desires. By purchasing any item off the Big World Pictures Ebay store from July 23rd to September 23rd, perverts will automatically be entered in a chance to own, wear and fondle a soiled piece of sin-sational cinematic history.

Winner of multiple “Best Exploitation Film” and “Audience Favorite” awards, DEAR GOD NO! follows outlaw motorcycle gang The Impalers through a murder spree that ends in a home invasion gone terribly wrong when they attack two graduate students, a disgraced Anthropologist and his teenage daughter played by America’s starlet Madeline Brumby. A demonic creature in the woods, a deadly secret in the basement, rivers of blood and abundant nudity add to the surprises that have been thrilling genre fans across North America.

“We originally wanted to present the film in Odorama so I’m touched that one lucky sinner will have an opportunity to explore the lowest depths of human sensuality in this new form of explicit audience to screen interaction”, says director James Bickert.

A sequel to Dear God No! titled Frankenstein Created Bikers is currently in preproduction. The lonely, deprived, thrill-hungry and curious can enter this ribald contest at http://myworld.ebay.com/bigworld2012/ Every entry will receive a bumper sticker, a hand signed clean bill of health from Dr. Marco and a pleasurable voodoo curse.

Contest rules: Must be 18 years of age to enter. Employees of Big World Pictures are not eligible. Contest is not associated with Ebay. This collectible piece of screen used memorabilia is stained with stage blood and comes with a certificate of authenticity. Garment complies with United States health and postal regulations. For additional film details, visit www.deargodnomovie.com.