THE BABY might legitimately hold claim to being the most disturbing PG film ever made. That’s a bold assertion, but there’s nothing quite like the unholy blend of what can only be called wholesome perversity that defines Ted Post’s 1973 cult obscurity. It’s an exploitation film that counter intuitively has no sex or nudity, no foul language and only a smidgen of mild violence, yet also feels dirtier and more uncomfortable than the more explicit fare that were its contemporaries. Trafficking in adult themes that normally far beyond the reach of a meager “parental guidance” warning, the film has an aura of unseemliness — a sickness of humanity — that feels at odds with the superficial softness of its surface.

THE BABY centers around a battle of wills between two woman over the well being of “Baby” (David Mooney), a physically adult man who has not, emotionally or mentally, progressed beyond the infant stage of his life — he is, for all intents and purposes, a two-year old trapped in the body of a mid-twenty something, complete with an oversized crib and a wobbly inability to walk on two legs. Into his world comes Ann Gentry (exploitation mainstay Anjanette Comer), a concerned social worker who is assigned to do regular wellness check-ups on Baby, to the chagrin of his gruff mother (Ruth Roman) and older sisters (Susanne Zenor and Marianna Hill, MESSIAH OF EVIL) who seek to shelter him from all outside influence. Ann becomes increasingly devoted to freeing Baby from the iron grip of his family, but they are just as crafty in parrying her moves. But who really has Baby’s best interest in mind? 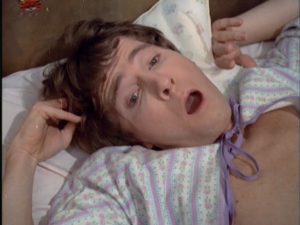 From the outset, THE BABY deals with a subject that’s rarely broached even in today’s more permissive, open cinema: adult infantilism, the bedroom fetish that goes well beyond cheeky exultations of “who’s your daddy!?” to legitimately sexualized parent/child roleplay and dress up. Also known as autonepiophilia, it’s a subject that’s made so little dent in even the fringes of discussion about kink, that a cursory glance at Google for movies featuring the subject turns up…absolutely nothing. For all intents and purposes, THE BABY may be the only film in existence that centers itself on this very outré subject. That it does so in a PG rated movie makes it all the more strangely, beguilingly absurd.

To be fair, the movie doesn’t posit Baby himself as the progenitor of a sexual fetish (unless he is really that dedicated to the facade); the movie makes it clear that he himself is, in some way, mentally under-developed, whether it be something he was born with or something that was forced upon by his overbearing family at a young age. Most likely the latter: Baby’s father prematurely died when he was younger, and it is implicitly suggested that his mother, in collusion with his sisters, may have forcibly stunted his development in order to prevent him from leaving as well. As asexual as Baby may be, though, and as resistant to explicitly showcasing sex as the movie itself is, it doesn’t shy away from the suggestion that Baby’s mental emasculation is a form of sexual release for each of the troubled women: the youngest sister (Zenor) delights in abusing a “misbehaving” Baby with a cattle prod; eldest daughter Hill sneaks into his room to have sex with him (we see her dress fall to her ankles, making the implications undeniable); and his mother’s refusal to let him get help is based on the fact that he is essentially, though she may not admit it, an emotional proxy for her deceased husband. Even Ann, with her earnest concern for his well being, may have ulterior motives for his removal from the household. 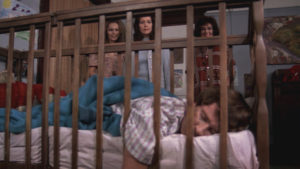 What makes THE BABY work as a film proper — and it’s quite a good film, one of the unsung gems of the ‘70s exploitation circuit — is both the acting and direction, which ground the film in a compelling and unadorned reality.  Comer and Roman are both terrific as the flipsides of the same combative coin, trading off sympathy as the film progresses. Comer, securing a rare lead amidst a sea of television credits, is believable as a sincere, concerned and driven caretaker with more than a glint of steely fixation, matching wits with Roman, as a smart, knowing woman who would’ve, in a past era, been described as “brassy.” Hill and Zenor are also quite good as daughters just as damaged as Baby by a troubled family life, the former evoking a spacy, detachment, the other an impulsive immaturity. Mooney has the most thankless task of all — he’s only asked to play a giant baby, after all — but he is convincingly child-like in physicality and action. 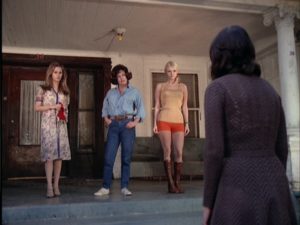 Director Post spent most of his career in TV, with only a small handful of film credits to his name, most of which were franchise entries that didn’t need to display a filmmaker’s individual personality, films like BENEATH THE PLANET OF THE APES and MAGNUM FORCE He was one of those old school craftsman, the kind of competent workman who would show up and do the job needed with unfussy straight-forwardness. There’s little that’s notable or stylish about Post’s direction on THE BABY, which, given the modest budget and timid approach to more visceral subject matter, sometimes gives the film the feeling of a made for TV production. That’s actually what the film needs. The flat, televisual look and Post’s unpretentious direction serve to get out of the film’s path, allowing it to breathe where a more ostentatious, explicit style may have smothered it. By denying us the gratification of exploitation, by not hiding behind the easy crutch of gore or nudity, or the curtain of visually immersive stylization, Post highlights the films’ disturbing thematic elements even more. By being so plainspoken, the intensity of the ugliness within stands out even more.

In the course of the film’s slim 84 minute runtime, THE BABY addresses not only the concept of adult infantilism, but incest, abuse, obsession and, obliquely, female domination. These are heady and perverse concepts for what is, at its heart, a cheap drive-in film to cover, but that it does so in a film that was deemed appropriate for young children is remarkable. Granted, the PG rating was a far more malleable thing during this time due to the lack of anything between it and the R rating, which led to some very intense and scary films to be deemed age appropriate, films like JAWS and POLTERGEIST. But even if THE BABY had come late enough to receive a PG-13, it would still seem like a surprisingly permissive rating for such a bizarre and discomfiting film.