There are several reasons why 2000’s GINGER SNAPS remains one of my favorite horror movies set during Halloween. With its nightmarish scenario intruding into an idyllic suburbia, monsterism as a metaphor for adolescent coming-of-age, and teen angst in the from of the Fitzgerald sisters, played with wanton longing by the voluptuous Katherine Isabelle and the intense Emily Perkins, few films have portrayed teen growing pains so accurately and so painfully.

Establishing off the bat that we are in bland Bailey Downs by its opening shots of grassland and generic housing set against a bleak October backdrop, GINGER SNAPS lets us know nothing interesting happens here. When a wild animal runs on the loose killing house pets, it warrants enough news to warn all the town’s residents. Perhaps this is why the Fitzgerald sisters, Ginger and Brigette, have made a suicide pact: “Out by sixteen or dead on the scene.” For a class project, they photograph themselves in different grisly suicide scenarios. Anything, they seem to say, would be preferable to doing what is expected of them and living out their predictable suburban existence. Ginger and Brigitte’s worldview is reinforced by the ineffectual adults in their lives, including their parents, who are going to counseling and obviously don’t get along, their school nurse, who chooses to treat Ginger’s first period as a blessing with little empathy for her pain, and their teachers, who react to their grotesque photo projects with expected reprimands but little concern.

The film’s true genius lies in showing Ginger’s morphing sexuality before she is bit by a werewolf. She experiences intense body pain before this incident, first begins menstruating, and utters the classic line “‘just’ and ‘cramps,’ they don’t go together” to Brigitte when she asks if she’s sure it’s “just cramps.” However, shortly after all these symptoms begin to manifest, Ginger is bitten, which leads to a pitch-perfect blending of the onset on lycanthropy with the onset on menses. Ginger becomes more sexually active, aggressive, and emotional, leaving Brigitte behind to focus on boys and parties. For a time, all of this almost seems like normal growing pains, and the viewer empathizes with Brigitte trying to regain her lost sister. When Ginger’s blood lust begins to take over in certain situations, however, it is a sure sign there is something deeper than hormones at work. 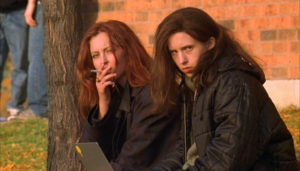 The film works so beautifully because of the chemistry between the two leads. Just as Katherine Isabelle dominates as the fiery redhead whose powerful appetite starts to overcome her, Emily Perkins provides the perfect balance as the equally morbid but more cool and removed Brigitte who believes in werewolves and wants her sister back. When Ginger begins growing hair in unexpected places and a tail, it’s ultimately Brigitte who she turns back to, who at one point says she would rather die than become what Ginger is becoming. The other brilliant nuance of these performances is it’s easy to see Brigitte’s behavior as jealousy at first, as she has skipped a grade and obviously is not developing or attracting boys’ attention as quickly as Ginger. As the film progresses, however, and Ginger turns into more and more of a monster (with impressive creature effects and a growing kill count), only Brigitte’s tireless efforts experimenting with local drug dealer Sam are trying to save her. This is where the film taps into werewolf legend, and Brigitte works with Sam to try silver and monkshood in a race against time before Ginger becomes a greater beast around Halloween and the full moon.  Brigitte can only be seen as a loving and devoted force that doesn’t want to be left behind by the outcast sister that is her link to an insular world. 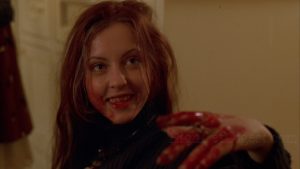 GINGER SNAPS remains a Halloween horror classic for anyone looking to delve into the genre. Its unassuming suburban backdrop illustrates that horror is often bred in the last place we are looking for it, and arises because of the inattention of the comfortable to what their children are doing. Its bittersweet story of two twisted sisters who tap into the dark side and find more than they bargained on looking for will resonate with many viewers. Perhaps in an uncomfortable way, Ginger’s growing appetite for sex and adventure will remind many of an awkward teen phase. And surely, many will enjoy the feminist twist on a coming-of-age story and the classic full moon werewolf legend. All of these qualities will hopefully make it a film that will be enjoyed during the Halloween season for years to come.