Don Coscarelli’s PHANTASM, released in 1979, is the most pure example of an endless nightmare captured on celluloid. It played upon the fears of loss and death in a way that most didn’t, and frankly still don’t today. The horrifying idea that even the sweet embrace of death wouldn’t save you from unfathomable evil is something that still holds up today. Even now, some thirty-odd years later, PHANTASM still plays to packed crowds in theaters, most recently with the re-mastered release brought to us by longtime ‘phan’ J.J Abrams and most excitingly, the fifth and final film in the franchise.

In 2014, PHANTASM: EXHUMED by author, Dustin McNeill was released, an exhaustive 268 page book covering the entire franchise through all the sequels, including the aborted sequels, and the upcoming PHANTASM: RAVAGER It compiles photographs, letter and memos, and set journals by The Tall Man himself. It’s definitive and definitely for die-hard fans and newcomers alike. And worth noting, is the end result of five years worth of work, truly a passion project. Dustin’s life with the PHANTASM franchise has been clearly established long before the book’s release. Whether it be bringing Michael Baldwin back into the convention fold for cast reunions, penning love letters to the films in the pages of HORRORHOUND, or offering consultation on the documentaries and bonus features for the excellent Scream Factory release of PHANTASM II years back, one thing is evident: Dustin’s love for the franchise is unmistakable.

Since Daily Grindhouse is deep into celebrating PHANTASM WEEK in celebration of the release of PHANTASM: RAVAGER, we thought we’d take some time out to interview the author of the aforementioned companion book and hear his thoughts on this immortal franchise. 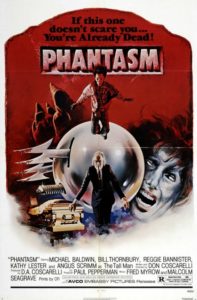 Daily Grindhouse: How did the Phantasm films come into your life?

Dustin McNeill: I happened upon them randomly at my local video store in high school. I was immediately taken by the striking originality of the first film, but I wouldn’t say I was completely hooked until I saw the three sequels that followed. They were simply amazing to me, a cinematic universe unlike anything else I had seen in the genres.

DG: What was the book’s genesis?

DM: In 2007, I opened the PHANTASM ARCHIVES website , which I still maintain today. The response to that venture from the phans was immediately positive and encouraging. After several years of running that, I had also become friendly with much of the cast and crew. I became particularly close with Angus Scrimm and remained so until his passing earlier this year. Between sensing the need for a retrospective book, seeing how big the potential readership was and my friendships with the filmmakers, it was a no-brainer. Despite having no real experience writing books or publishing, I dove in and figured it out as I went.

DG: What was the hardest part of writing PHANTASM: EXHUMED overall?

DM: The approach I took to PHANTASM: EXHUMED was that I wanted to provide a ridiculously detailed chronological production account of the four films. That meant I wanted to go through each step of the filmmaking process day-by-day, which required an exhausting amount of research and organization. Very few books on film take that approach and for good reason, it turns out. But I’m glad I did it that way, even though it was so hard being that I was a first-time author.

As for the writing itself, I was incredibly fortunate to have folks like Angus, who won a Grammy for his liner notes back in the 1970s, and series crew member Kristen Deem, who holds an English degree from Stanford, to edit my text and provide critical feedback. That actually has become my advice to any aspiring writer out there – find good, smart people to give you unflinching feedback and use that to elevate your material. It eases some of the hardship of writing a huge tome like this. 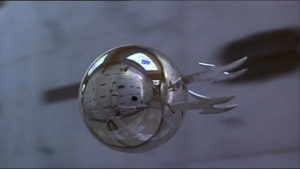 DG: Were there any interviews that you wish you could’ve landed for the book?

DM: Well, the big interview I didn’t get was Don Coscarelli, which is why my book is subtitled “The Unauthorized Companion!” Even before I began the project, Don and I had never really hit it off, not like I had with the other cast and crew. Initially I got a very firm rejection from the guy, but later on while making JOHN DIES AT THE END, I got a “Let’s talk soon,” e-mail. That talk never happened and I simply forged ahead writing the best book I could. I remain a huge fan of his work, though, and fortunately I was able to interview more than sixty cast and crew from the series, some for the first time ever.

DG: What was your favorite revelation from the book? Any tidbits that didn’t make it in?

DM: I have so many. One of them came from former AVCO Embassy President Robert Rehme. He revealed to me that his company reaped millions from distributing PHANTASM, much more than they had grossed in recent years. That allowed them to fund new productions and one of those was Joe Dante’s THE HOWLING. So if you dig THE HOWLING or any of its thirty-six sequels, you can thank PHANTASM!

As for tidbits that didn’t make it in, there were a couple of stories I was asked to take out. Being that I was asked to remove them, I would probably land myself in hot water by posting them here!

DG: Do you have a sequel that you favor more than the others, or is it all encompassing to you?

DM: Beyond the original, my favorite sequel is PHANTASM: OBLIVION. The second and third films are plenty fun, but OBLIVION really resonates with me. Coscarelli takes it back to the original four cast members and spends the whole movie focused entirely upon them. It has this amazing David Lynch-ian quality, this unique lens that delves into who these characters are. Mike also comes to terms with this transformation he’s undergoing and takes a bold stand, no longer allowing himself to be a victim – I love it! You also have those marvelous outtakes from the first PHANTASM along with Angus Scrimm in a dual-role as Jebediah Morningside. And that enigmatic ending! 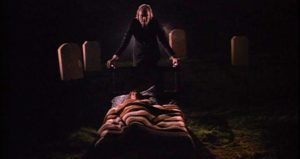 DG: With reference to the sequels that never were, was there a certain one you wished could’ve made it to the silver screen?

DM: Well, it certainly wouldn’t be Roger Avary’s PHANTASM 1999. To me and a lot of studio executives it turns out, that one was pure garbage that relegated Mike and the Tall Man to background characters. One draft even wrote Mike out of the film completely for the sake of having more Bruce Campbell in it, which is sacrilege to me. Mike is the main character of PHANTASM, end of story. If you manage to screw that up, well… I don’t know how you recover from that.

The unmade script that I enjoyed most was Stephen Romano’s PHANTASM FOREVER. That’s the one Don filmed as a table read with the entire cast against a green screen, later compositing in music, backgrounds and effects. Simply put, it was brilliant. Angus Scrimm called it “fascinating” and Michael Baldwin repeatedly referred to it as “the thinking man’s PHANTASM.” There appears to be some influence from the FOREVER script in the new PHANTASM RAVAGER, so we’ll see.

DG: I spoke with Stephen Romano about the potential remake a few years back, was there any conversation with him about that particular project?

DM: Historically, Stephen has been notoriously tight-lipped about his work with PHANTASM so I didn’t even approach him for my book. I had interviewed him twice before for my website and gotten basically nothing. But I am familiar with the remake script he co-wrote with Coscarelli and I’m a fan of it. I’m a fan of it because, as was reported on news sites at the time, it wasn’t really a remake! It was a fun hybrid sequel-remake. Mike and Reggie were back, now in series elder-type roles, and Angus was still the Tall Man. Michael Baldwin’s part was especially good as he played Mike as an Obi-Wan type that helps guide the new characters. 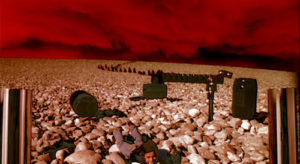 DG: What’s next on the horizon?

DM: I’m currently working on my second book and having a blast writing it. This one is focusing on much bigger horror franchises than PHANTASM. I’m not yet ready to reveal the title or what it’s specifically about, but I will say the subject matter puts it in the general vicinity of Springwood and Crystal Lake.

Additionally, we found a review of the novel on Amazon that lavished glowing praise of the book:

It’s like a brimming over bowlful hot-buttered popcorn fresh from the popper, a deeply gratifying entertainment with something to chuckle over, marvel at or cheer on every page. The fifty or sixty-odd interviewees obviously had a blast working on Coscarelli’s films and their affectionate, often humorous reminiscences glow out from the paragraphs of Dustin McNeill’s skillful prose. I’ve read the book all through but can’t resist picking it up and re -reading again and again.at random for fresh enjoyment.. If I do have one single objection,, it’s that the 260 photos the book boasts of may include an excess of one tall, gaunt, scowling personage clad in black. . Of course, being an actor, he’d probably be the last to complain.

That review was written by a fellow named ‘Lawrence Rory Guy.’ That should put a smile on the faces of Phans everywhere.