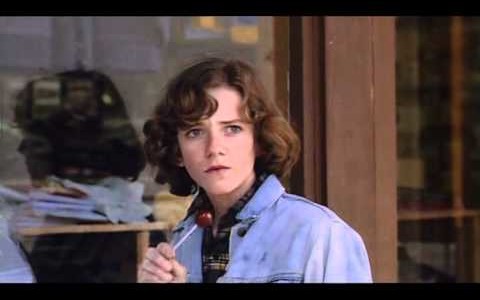 I didn’t care much for horror movies growing up. To be honest I hated them. The rest of my family (including my much older brother and sister) would enjoy watching films such as FRIDAY THE 13TH, TEXAS CHAINSAW MASSACRE, and even lesser known films such as MADMAN. I would be off somewhere else in our house playing with my Legos or whatever action figures I had, watching cartoons and generally trying to avoid seeing anything that would give me nightmares. There was always that curiosity of course, I would walk into the room to pretend to ask a question just to see what was going on, thinking maybe I wasn’t as much of a wuss as I thought was and could join the family…but no, I was indeed what I thought I was. That is until I saw PHANTASM. 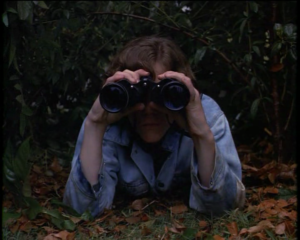 I remember peering through the banisters to our basement, my brother’s domain (Assistant Editor Mike Vanderbilt) where he would often be watching some movie I should not have been seeing catching glimpses through the wooden banisters. I was able to learn about what would become some of my favorite films ever such as HEAVY METAL this way but one film that had a profound effect on me was Don Coscarelli’s PHANTASM. It was a horror movie, a real horror movie. It wasn’t a cartoon, it didn’t have the splatstick and fantasy style that ARMY OF DARKNESS had and one thing it had that really spoke to me as a young man was a lead character who was a kid roughly my age. Most of the horror films I’ve caught glimpses of featured a group of teenagers or adults getting picked off one by one by a killer, kids were typically just background characters if even there at all. 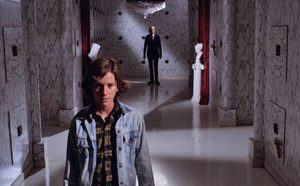 In PHANTASM Mike Pearson was for all intents and purposes the hero. He discovers the Tall Man’s villainous plan, he investigates on his own, he even wounds the towering villain which leads to him being able to prove to older brother Jody that there was indeed something nefarious taking place at the local mausoleum. Mike was a smart kid, he wasn’t perfect, he got scared. Mike was mostly terrified of his older brother Jody leaving him behind, even being able to fix up a car and use a gun, Mike still needed Jody around. Speaking as someone who was a kid at the time this was amazingly cool to see and gave myself much to think on as to how to face the unknown. At a recent showing I attended of PHANTASM: REMASTERED, Coscarelli mentioned how he was surprised to see the movie become known as sort of a teen/child empowerment movie but that description is spot on when you look at the film as a whole. As the film reaches it’s conclusion you get to see all the lead characters team up to take on the big bad and it was great as a kid who would follow his older brother around to see that sort of union between blood relatives. 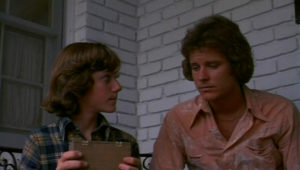 One of my favorite scenes from the film is  when Mike escapes the clutches of the Tall Man on his own. He get’s taken and thrown into the back of the hearse, seemingly doomed with no way out but he shoots the tire of the car through the floor of the hearse and escapes. This scene was just so cool because once again you have to consider this is a kid doing this, I was seeing a kid my age basically pulling the kind of move you’d expect from the likes of John McClane and succeeding at escaping the near unstoppable villain. This ties together perfectly with the theme of the movie that would make itself clear to me on more viewings as I grew older…that fear is the real killer. The fortune teller scene in the beginning was always just a weird—and seemingly—out of place scene, but it had some sort of interesting mystique and reminded me of the kind of shops I would see in the video games I would play. When the realization of what the box symbolized hit me many years later it took on a whole new meaning as to why the movie struck such a chord with myself and many other kids who ended up watching it for one reason or another. It taught you to face your fears and be calm when in danger, which is a lesson I feel everyone no matter what age or gender should take to heart. 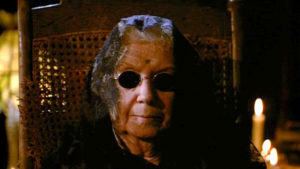 I’m thankful I stumbled upon watching PHANTASM, it was the first horror movie I could really relate to and due to that it gave me some courage to delve deeper into the genre and to go on the path of creating my own stories one day. I think every young man should take in the film as a means to show that you can be a kid in a true horror move, not more comedic affair like the wonderful THE MONSTER SQUAD, and be one of the heroes alongside the bigger guys. 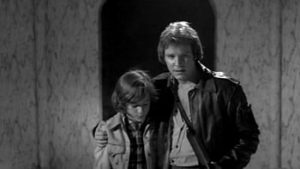 After seeing PHANTASM, my fear of horror movies seemed to subside by a large amount, I still wasn’t how I am now, willing to watch whatever comes my way…but I had a stronger sense of how to deal with fear and was willing to be a bit more daring. It’s a big reason why PHANTASM is still a treat to watch today because no matter how old I get I still find myself putting myself into Mike’s shoes as he dealt with the fear of his brother moving on and the monstrous Tall Man seeking to end him.