This is the era of the fan as the celebrity. Instagram accounts that feature someone dressed up as movie and television characters can possibly have more followers than the actors and actresses that play the characters themselves. Countless documentaries subscribing to a “by the fans, for the fans, about the fans” mentality about films from GHOSTBUSTERS to A NIGHTMARE ON ELM STREET are crowdfunded every year; this style of  documentary rarely focuses on the films themselves, but the fans who have remained obsessed for the majority of their lives and find that the movies are intrinsically tied to the story of their own lives. Most of these films end up feeling like they’d be perfect as far as a special feature on a home video release, but falter as a feature film, never truly finding its footing as a transcendent statement about that feeling of finding something so important to you, but the rest of the world just doesn’t seem to get it. THE PHANTOM OF WINNIPEG rises above the average fan documentary, by not simply exploring the adoration of Brian De Palma’s cult-classic PHANTOM OF THE PARADISE shared by residents of a small Canadian city, but also the titular city itself, showcasing a phenomenon that could never exist in the age of Twitter where information travels faster than the speed of light. 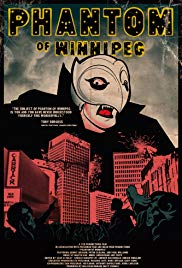 Upon its release on Halloween night, 1974, PHANTOM OF THE PARADISE was panned by critics and ignored by audiences. The weirdo rock ‘n’ roll musical—featuring songs from hitmaker Paul Williams—combined elements of classic horror films, PHANTOM OF THE OPERA, THE PICTURE OF DORIAN GRAY, and FAUST to tell the story of a songwriter literally making a deal with the devil to get his music heard by the masses. It’s a cynical satire from De Palma who would arguably never tackle a project this offbeat throughout the rest of his career. While he became known as a master of suspense, most of his early work featured a similar satirical sense of humor. He would helm broader comedies throughout the ‘80s but he’d never again attempt something so bizarre. It’s amazing to look back at a time when a major studio—20th Century Fox—would release something so strange, and upon hindsight, PHANTOM was destined to be a cult-classic, not a Hollywood hit.

And it did become a cult hit thanks to home video and showings on cable, but the rest of the world had to catch up with the residents of Winnipeg. While indeed PHANTOM flopped in the United States, it became a hit in Paris and the small Canadian city. The filmmakers collected a wonderful gang of weirdos who grew up with PHANTOM OF THE PARADISE, attending weekly screenings of the film and wearing out their vinyl copies of the soundtrack to tell the story of PHANTOM’s success throughout the late ‘70s in the great white north. The documentary elevates itself above other fan docs in that it’s not simply about the love of an oddball slice of pop culture, but the story of the town-—arguably the ONLY town—where this was destined to happen. It’s an eclectic mix of fans that show up in the documentary—including Kevin Smith—that each have funny, weird, and even touching (without getting bogged down in the saccharine) stories about the time spent with the film. It’s also interesting to note that it would appear PHANTOM was so big in the town, that even the Peggers (the name with which hardcore PHANTOM fans from Winnipeg have christened themselves) featured in the documentary didn’t seem to know each other until one superfan organized Phantompalooza, a festival of all things PHANTOM OF THE PARADISE in 2006. 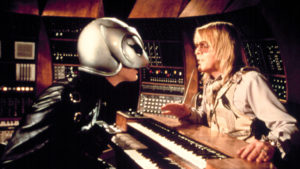 Brian De Palma is notably absent from the documentary but Gerrit Graham, producer Sam Pressman, and star and composer, Paul Williams…all of whom are elated that the film lives on today, if still confounded by why it played so well in Winnipeg, and that’s the most compelling part of the story. Was it something in the water, was it something in the air? The documentary never solves that mystery, but it isn’t the point of the film. Regional trends are fascinating, the way a band can have a small, rabid following in say the midwest, but could never reach the apex of nationwide success. The story of PHANTOM’s success mirrors that at every turn. Taking place in the pre-social media age of the ‘70s, several of the Peggers explain being baffled when they discovered that the film was not a success the world over, simply in their little town. While the other cult musical of the ‘70s, THE ROCKY HORROR PICTURE SHOW became an institution and a teenage right of passage around the world, the cult of PHANTOM remained small and loyal and the documentary looks at this group of people who made PHANTOM OF THE PARADISE a massive hit that outgrossed even JAWS…in Winnipeg that is. 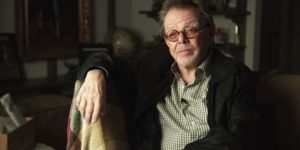 PHANTOM OF WINNIPEG transcends the average fan documentary into something more offbeat and even more personal. The phenomenon of PHANTOM OF THE PARADISE’s success in Winnipeg may never be replicated, but the filmmakers have provided a funny, compelling document of a time, a place, and a love of a film that will speak volumes to anyone who has experienced this sort of obsession for popular culture.