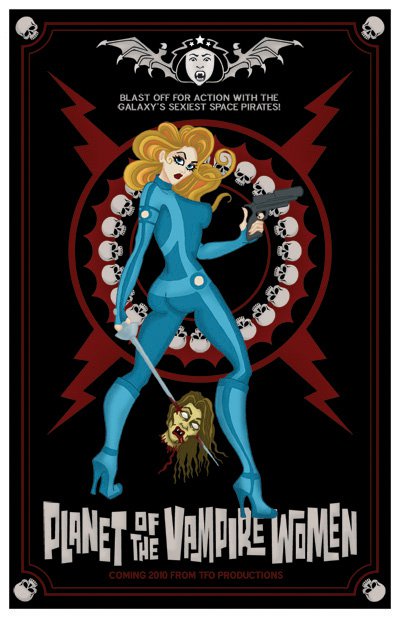 From planetofthevampirewomen.com: After pulling off the heist of the century, notorious space pirate Trix Richards and her gang of interplanetary outlaws attempt a daring getaway in an antique warship. The mercenaries blaze through the galaxy with the law on their tail, seeking refuge on a long-forgotten sinister moon. But when the ship crashes into the storm-shrouded orb, they find themselves stranded in a nightmare world of unrelenting terror, with a scout missing and a fatally wounded leader.

As the crew assesses the damage, Captain Richards rises from the dead with an insatiable lust for blood. She disappears into the fog, leaving behind a badly wounded helmsman and an unfathomable mystery. A scout party is quickly assembled to investigate the hostile environment, which is plagued by violent electrical storms and alive with danger. It is also a breeding ground for degenerate aliens and the pirates soon find themselves trapped in a desperate struggle to stay alive. Stumbling upon the ruins of an ancient civilization, they unwittingly awaken a dormant evil bent on destruction of the dark moon and its bloodthirsty inhabitants.

The remaining humans must race against time to escape the doomed world and reach civilization before the space vampires can spread their infernal horror to an unsuspecting universe.