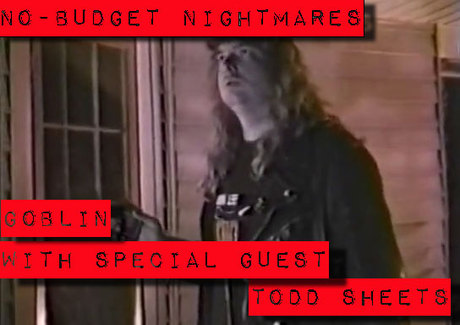 Todd Sheets. TODD SHEETS. If you had told us all the way back in Episode #5 that less than 30 episodes later MOE PORNE and DOUG “SWEETBACK” TILLEY would be talking to the man himself, they would have called you a liar. A scoundrel. A miscreant. Yet, here we are not only featuring a film he’s actively disowned (1993’s GOBLIN), but also featuring an interview with the MASTER OF SPLATTER TODD SHEETS! Yeah, this is a big one, so call your parents (adopted or otherwise) and get them to listen as Todd dishes the dirt, peels back the layers and gives a VERY SPECIAL announcement about his upcoming film HOUSE OF FORBIDDEN SECRETS.  All here and more on.. NO-BUDGET NIGHTMARES.

E-mail us IF YOU DARE at nobudgetnightmares@dailygrindhouse.com.

Why not check out No-Budget Nightmares on Facebook? We’re on iTunes, too!

Or check out Moe Porne and Doug “Sweetback” Tilley on Twitter!