1987’s POLICE ACADEMY 4: CITIZENS ON PATROL (or “PA4COP” to those in the robust POLICE ACADEMY fan community) felt, in many ways, like a turning point in the infamous law enforcement hijinx franchise. In an effort to reinvigorate the series, writer Gene Quintano brought in the idea of having Commadant Lassard (George Gaynes) recruit civilian volunteers to assist police officers, allowing multiple additional characters to be brought in, adding to the already-cramped roster of regular cast members to the series. 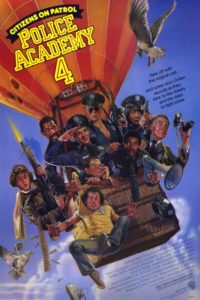 This was, no doubt, due to the reservations that several cast members felt about continuing with the franchise. Indeed, many cast members that had stuck with the series bowed out between PA4COP and the next entry, the bizarrely-coloned POLICE ADACEMY 5 ASSIGNMENT: MIAMI BEACH (or PA5AMB). Their story arcs from rivals to parachute-sharing buddies complete, gone were the dynamic duo of Zed (Bobcat Goldthwait) and Sweetchuck (Tim Kazurinsky). Gone was the occasionally-appearing Kathleen Kirkland-Tackleberry (Colleen Camp), who was referenced but never again seen. Gone was Nogata (Brian Tochi), who appeared for little more than an extended cameo in PA4COP. Gone even was the Blue Oyster bar, whose patronage changed considerably once it was purchased by a man named Buddy Cole [1.] 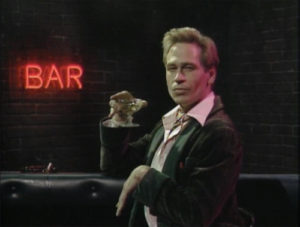 And most notably, gone was Carey Mahoney, the wise-cracking, prank-pulling, woman-chasing “center” of the series, played by Steve Guttenberg. As much as the ramshackle POLICE ACADEMY films, which normally had to juggle anywhere from ten to twenty characters through various goofy shenanigans, had had anything resembling a leading character, it was Mahoney. He would serve as the lead prankster of the film’s authoritarian antagonist (be it Mauser or Harris), make speeches or proclamations to sum up the general feelings of the rest of the group, or get the attractive woman on the force with some vague personality trait, whether she be in the form of Kim Cattrall, Sharon Stone or Shawn Weatherly. Mahoney was as close as the series got to an audience surrogate, as who wouldn’t want to go through life with a badge and a smirk like he did? 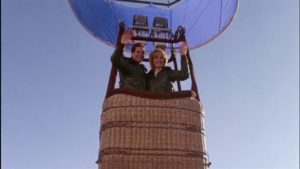 The last we see of Mahoney, he’s riding off in a hot air balloon, sipping white wine with a feather-haired Sharon Stone. As the credits to PA4COP roll, we hope for his return, but in retrospect, we realize that the days of Mahoney switching Harris’s Right Guard with mace are over.

Who, then, could replace Steve Guttenberg’s affable prankster as the POLICE ACADEMY series’ focal point for plot advancement and standing up to Harris? Who would rap along with Michael Winslow’s Jones to the film’s rap song?

The first option seemed to be Bubba Smith, who was second-billed in PA4COP and promoted to first-billed in PA5AMB. However, Smith’s Hightower was never really the initiator of antics, nor much of a womanizer – in fact, Hightower doesn’t really do a hell of a lot during the whole series other than look like Bubba Smith. (One exception: In PA4COP, he gets to play some sort of voodoo gangster as part of a prank. This may have been a test to see if Smith was able to do more comedy bits.) I’m also not entirely positive if Smith was capable of smirking gleefully. 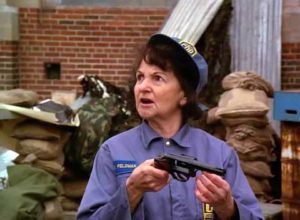 PA4COP introduced a plethora of other options to be considered. There was elderly-uber patriot Mrs. Feldman, played by Billie Bird. There was tubby lawyer Butterworth, played by Derek McGrath, Worm from FREAKED. There was, of course, Claire Mattson, played by Sharon Stone, who, um… liked dogs? She wasn’t really given a personality trait. More screen time went to Laura, played by future Veronica Mars mom Corinne Bohner (and former JOYSTICKS star), who played a new recruit and Zed’s love interest. There was also House, the heavyset new recruit played Tab Thacker. Hell, maybe they could have moved Nogata into the lead. This was, however, an important comedy franchise, and an ‘80s teen-focused screwball comedy had a uniform type at its head – a young, white, likeable-but-snarky, girl-crazed-but-not-stalkery-in-an-‘80s-sense-but-kind-creepy-now male for the audience to identify with. It needed its Otter, its Tommy Turner, its Koogler.

The obvious choices would have been one of the new skateboarding recruits played by Brian Backer, David Spade, and Brian Backer and David Spade’s unconvincing skateboarding stunt doubles. They were young, snarky, potentially womanizing and seemed to be able to pull off pranks. I’d imagine that their introduction was a way to hedge their bets and potentially move them up the cast list in the case of a Guttergency. (Hell, Backer had previously appeared in FAST TIMES AT RIDGEMONT HIGH and MOVING VIOLATIONS, so being bumped up to leading wiseguy status wouldn’t be much of a jump.)

However, with the exception of House, none of these characters returned. (Billie Bird may or may not be playing a different character in POLICE ACADEMY 6: CITY UNDER SIEGE, or PA6CUS.) The franchise had a void that needed to be filled. While all of the films are just excuses to have lots of people falling down and looking shocked and/or gleeful and/or angry, they did require some kind of central character to step in every once in a while, forward the plot and cause general zaniness. 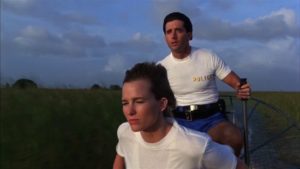 PA5AMB cuts the expanded cast down to the core members of the franchise as well as House, who is given his officer badge in the film’s opening. Bubba Smith justifies his newfound top billing in the beginning, as Hightower leads the group in talking Cmdt. Lassard out of being bothered by forced retirement, as well as initiating a prank on Harris and Proctor to get a cut-rate airplane trip to the Miami locale. 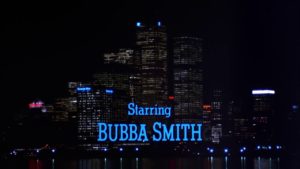 Once the group is in Miami for the Police Chiefs Convention (where Cmdt. Lassard is to receive an improbably “Police Officer of the Decade” award), however, Hightower fades to the background as Lassard’s nephew Nick appears, foiling a wallet snatcher dressed in drag. (The wallet-snatcher is in drag, rather than Nick, which would have made for a much funnier introduction. Call me, POLICE ACADEMY writers.) Immediately, there’s potential – Nick is obviously a go-getter, and you’re curious as to how he’ll interact with the rest of the regulars. 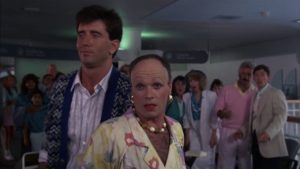 You can hold on to that curiosity, as the series isn’t particularly well-known for building any kind of actual relationships between its characters, even with seven movies to do it. Nick is introduced to the team and then just stands with them, as though he’s already part of the gang – there’s no exchange between he and the rest of them in the scene where Cmdt. Lassard presents them to him. It’s just on to the next moment, with Nick seamlessly now part of the group that has known each other for five movies. Nick is next seen amongst the group, holding back from them to console his uncle about his impending retirement. 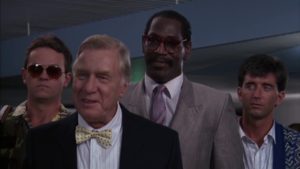 By the following scene, Nick may as well have been a character in the previous movies. He shows Hightower around the pool area, ogling the film’s token female love interest (Kate, played by A CHORUS LINE: THE MOVIE’s Judy Monroe, Janet Jones), eagerly stepping into Mahoney’s shoes as the franchise’s womanizer. Granted, Nick isn’t as successful – Kate turns out to be a cop, and flips him into the pool – but in the aftermath, flirtation ensues. Two scenes later, Nick is taking on Mahoney’s prankster role to Harris by spelling “DORK” in sunblock on the snoozing Captain. Nick has become Mahoney within ten minutes of screen time. 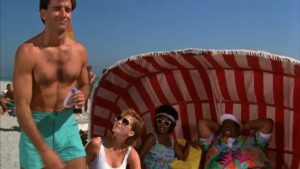 But Matt McCoy isn’t Steve Guttenberg – while both are perfectly charismatic actors, their charisma lies in slightly different skill sets. Guttenberg’s Mahoney is now-key, perfectly happy to sit back and watch the chaos around him ensue until he comes up with a suitable prank or is inspired by a noteworthy female figure. McCoy’s Nick, we presume, became a police officer out of a sense of duty rather than Mahoney’s “what-the-hell” attitude towards the field. As a result of the backstory, and with McCoy’s more aggressive vocal tenor stepping in for Guttenberg’s more leisurely attitude, Nick isn’t really the same character, but the script forces him to put on into Mahoney’s ready-for-a-kegger beer helmet. 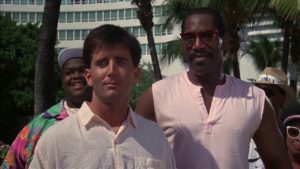 The fact that the POLICE ACADEMY franchise as a whole allows basically no time for any kind of character development doesn’t help with Nick feeling a little shoehorned in, especially since a lot of PA5AMB is taken up by the adventures of the villains as Rene Auberjonois yells at Archie Hahn. (This is not a complaint.) Outside of some interaction with Cmdt. Lassard and a brief sense of formality with other team members (he and Callahan shake hands when meeting in one scene), there’s virtually nothing to distinguish Nick from Mahoney, and when Nick appears in the following film, he’s just there, suddenly a cop in wherever the hell it is that POLICE ACADEMY takes place, with no explanation. Other than referring to Cmdt. Lassard as “Uncle Eric,” he’s basically a lower-tier Mahoney, playing pranks on Harris and occasionally pointing out things to his uncle to forward the plot. Heck, it’s not entirely clear why his character even returns for PA6CUS, as he’s given little to do and gets billing behind a returning Bruce Mahler.[2] 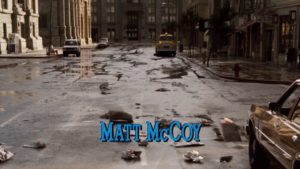 The tragedy is that Matt McCoy’s Nick should’ve have had to have been Mahoney. McCoy is a perfectly capable actor (most recently, he’s played hopeless lawyer Pete Monahan on “Silicon Valley”) and tossing him into a role that just feels like a faint offshoot of the same character type that the franchise was known for doesn’t evolve the series – it just makes it feel like a desperate substitute for itself. Making Nick a straight man that slowly warms to the zany antics of the team, for example, could have provided additional, new comic conflict while still keeping with a new audience identifier – Hightower and Jones could certainly compensate for the pranks for the bulk of the film. (And maybe they could have gotten a love interest for once?) They could have also played up the Lassard connection, and made Nick slightly unaware of the surroundings as his uncle was. 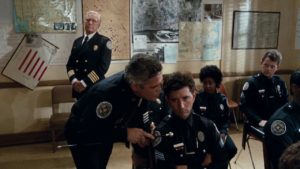 Instead, Nick Lassard is just a footnote to the POLICE ACADEMY heritage. The character is ignored by fans, blasted by critics, and, worst of all, unceremoniously replaced by Charlie Schlatter’s new recruit Kyle Connors for POLICE ACADEMY: MISSION TO MOSCOW. Nick just flew too close to the bright sun that was Mahoney without being able to storm his own path, and the series just continued to spin its uninspired wheels until vanishing completely once the TV series left the air in 1998. Don’t blame Matt McCoy – blame the reluctance of the producers to diverge even slightly from the pattern that they’d viewed as successful, even if the returns were starting to diminish rapidly. Matt McCoy is not your Steve Guttenberg, and he shouldn’t have been asked to be.

1 – This is a fan theory, but it’s kind of true. The location for the Blue Oyster Bar scenes was the Silver Dollar Room in Toronto. You know the bar that Buddy Cole owned on “The Kids in the Hall?” The Silver Dollar. Therefore, in between 1987 and 1989, Cole purchased the leather bar and turned it into a piano lounge. This is canon now, because it is on the internet.

2 – The opening to POLICE ACADEMY 6 is really odd when it comes to returning characters. The movie makes a big deal out of re-introducing a former colleague back to the franchise only to bring back Fackler, the clumsy guy played by Bruce Mahler. Not Mahoney, not Zed, not Sweetchuck, not even Nogata or the hooker played by Georgina Spelvin. Was there fan outcry demanding the return of Fackler? Who were these people? Nothing against Mahler or the Fackler character, it’s more puzzlement with the show of it all than anything.