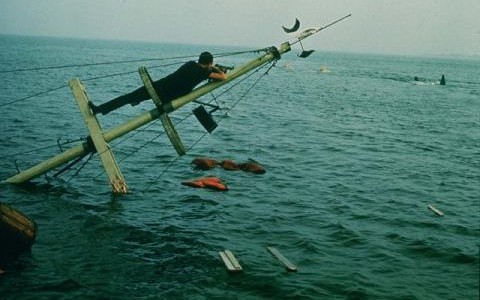 It’s the heart of the summer, so you may want to head out onto the high seas with ten aquatic-based flicks available on Netflix streaming! Granted, several of these are more WATERWORLD than JAWS, but I’m sure you’ll find something worth diving into.

Never one to shy away from a terrible idea, The Asylum produced this flick starring Bruce Davison(!) on a ship set to sail to commemorate the 100th anniversary of the Titanic disaster. Then there are typhoons and icebergs!

Produced as part of Showtime’s “Roger Corman Presents” series, this cheapo ALIEN rip-pff finds Roddy McDowall, Alex Hyde-White, Melanie Shatner and Don Stroud on an underwater mining platform that gets the bad end of an alien encounter. It’s… short! And has Roddy McDowall!

There was once a glorious time when fanboys thought that this film was about Jason Voorhees hacking his way through the Big Apple. Then it was released, and we found it it was mostly just FRIDAY THE 13TH, but on a boat. Kelly Hu and Gordon Currie are among the victims.

Larry Fessenden was one of the producers on this short (73 minute) horror pic about two families that go ice fishing and encounter a creature that causes them to set their differences aside. Michael Rooker stars.

Another underwater ALIEN rip-off, this is one of a number released in 1989, and features a great cast, including Peter Weller, Ernie Hudson, Amanda Pays, Richard Crenna, Meg Foster, Daniel Stern and Hector Elizondo. (Sadly, it does not have Miguel Ferrer’s head exploding, like DEEP STAR SIX.)

Michael Anderson’s notable JAWS wannabe produced by Dino DeLaurentiis features Richard Harris and Charlotte Rampling on the hunt for the whale that’s pissed off about the death of his family, while Bo Derek tries on different drenched T-shirts. With Will Sampson, Keenan Wynn and Robert Carradine.

The alternate title NORTH SEA HIJACK probably would have made more sense to audiences, but Roger Moore is in fine form as a millionaire who sends in forces to stop a terrorist (Anthony Perkins) who’s taken an offshire drilling rig hostage. With James Mason and Michael Parks.

I know, this is a TV series, but it’s one of the most hilariously deadpan TV series ever aired, as John Lurie goes out and tries to fish with some of his celebrity friends, including Dennis Hopper, Willem Dafoe, Tom Waits and Jim Jarmusch. Certainly one of the most psychotronic TV series currently available to stream.