One of the niftiest things about living in today’s modern age of go-go internet is the newfound accessibility of cultural artifacts that had been previously difficult, if not impossible, to find in previous decades.  Film enthusiasts never know when they may open a social media tab one day to discover that someone has not only discovered a movie of formerly nebulous availability but that they’ve uploaded it to some online video site for all to see.  Recently, film fans received welcome surprises when works like the Terence Stamp sci-fi film HU-MAN, Jean-Luc Godard’s UNE FEMME COQUETTE or random footage of THE DAY THE CLOWN CRIED appeared online without the least bit of ballyhoo.

That’s the case as well for RAGNAROK, a 1982 semi-animated feature written by author Alan Moore during his time working as a writer of anthology stories for the UK’s 2000AD series.  At the time, Moore’s V FOR VENDETTA and MARVELMAN series were starting as well, but both these tales were in their infancy, and Moore had yet to hit the critical and cultural notoriety he would soon have with his work on SWAMP THING, WATCHMEN, THE KILLING JOKE, FROM HELL, or THE LEAGUE OF EXTRAORDINARY GENTLEMEN.

For years, RAGNAROK was an unknown little footnote in the vast Moore bibliography, referenced as a curiosity with little other information available.  Officially released only once, on VHS in 1983 by Nutland Video, a tiny UK label that appears to have released primarily cartoons and a couple of exploitation titles, RAGNAROK was barely visible in 1983 and vanished completely soon afterwards.  Despite Moore’s subsequent fame, the title never appeared on the bootleg circuit, most likely due to the obscurity of the release.  Despite using the idea of the mythological Norse battle of Ragnarok as inspiration for the never-published “Twilight of the Superheroes”story , this earlier project bearing the name doesn’t seem to be referenced by Moore at any time, relegating the project to fall into the cracks of cultural history.  The only direct accounting of the film that emerged was a 2007 write-up by cult film writer MJ Simpson, who had randomly come across a VHS copy at a dealer. 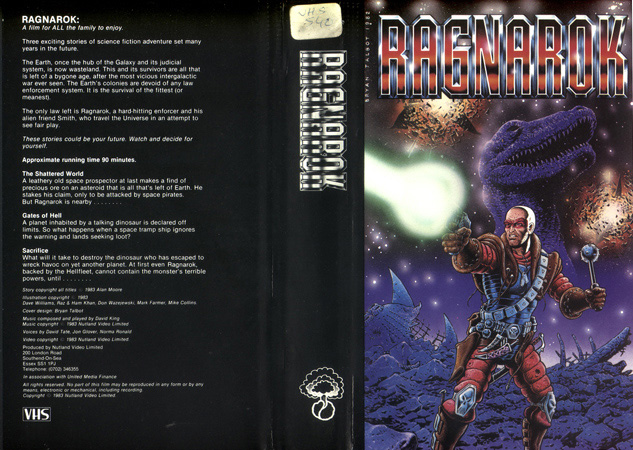 This past weekend, however, the cultural crack opened and RAGNAROK emerged, thanks to a Reddit threat inquiring as to its existence.  A respondent uploaded a video file of the VHS tape to Dropbox, allowing those who wished to see a genuine curiosity from one of the comic book medium’s finest talents.  The link is still there as I type this, but could certainly be taken down – however, with the fanatical completism online, you can be sure that once a Pandora’s Box of pop culture is opened, it can never be truly resealed.

“Curiosity” is how to best describe the film.  Less animated and more akin to a motion comic, RAGNAROK is essentially like having a comic book being read to you while you read it, though occasional sparkling stars and laser effects do offset the static images on occasion.  In fact, RAGNAROK feels like a direct-motion comic adaptation of a trio of general 2000AD stories, as the film is presented in three chapters following the continuing adventures of the titular hero.  The first segment sets up the idea of the character (much as a one-shot anthology story might) and the second and third expand on the character, creating a story arc that seems to allude to later adventures. 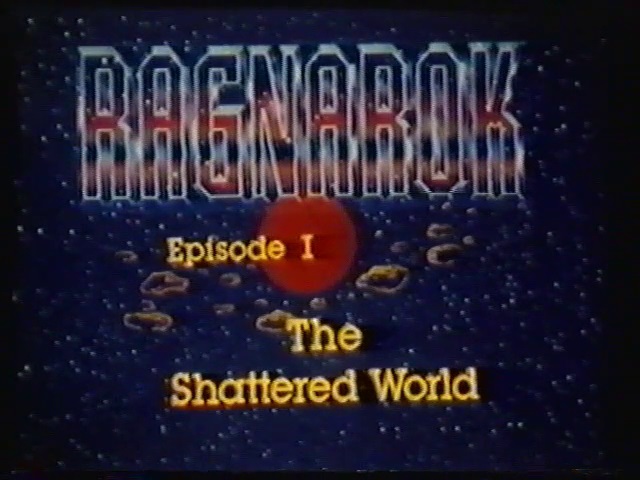 In chapter one, “The Shattered World,” a stereotypical elderly minor is excavating nickel and iron on an asteroid with Sparkplug, his robot donkey who longs for a new body.  (In a very odd exchange, Sparkplug talks about wanting to get a new body and go to a pleasure planet, to which the miner chastises him for “unhealthy thoughts and impulses.”  In other words, this is a film in which an old miner slut-shames a robot donkey.)  The duo’s work is halted, however, by a gang of claim jumpers led by the Hugo Strange-looking Daddy Bonus, intent on getting the log book from the miner to claim the asteroid as their own. 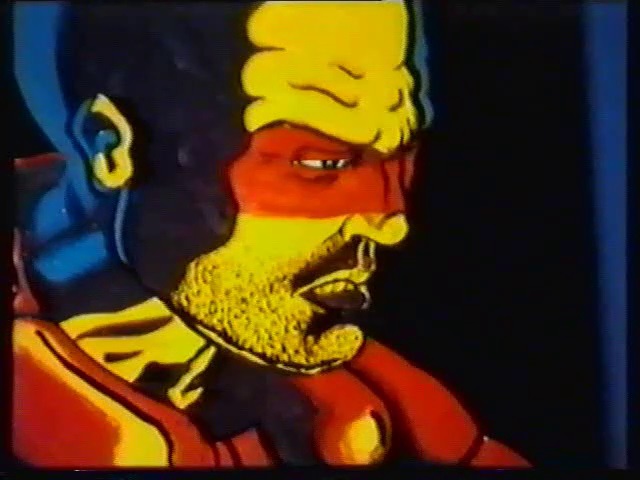 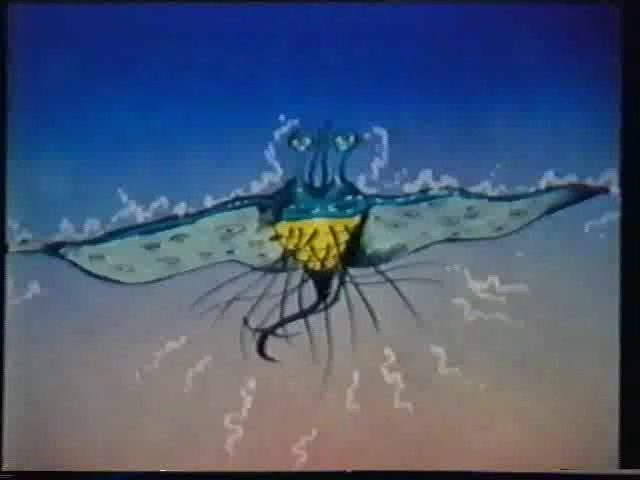 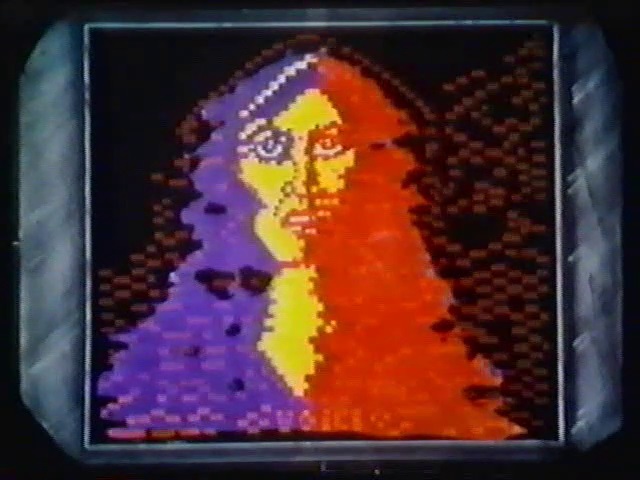 Enter Ragnarok, a space-faring heroic type who introduces himself as a “Regulator” and is accompanied by Smith, a floating blue manta ray who communicates via electric snaps and crackles, and VOICE, a feminine computer with a passive speaking voice.  Ragnarok dispatches of the henchmen easily, giving them a chance to have minor distinguishing dialogue before shooting them or tossing them into space.  After taking down the leader and befriending the old man, we then discover the twist – you’ll never guess which planet the asteroid used to be a part of!  No, you’ll probably guess. 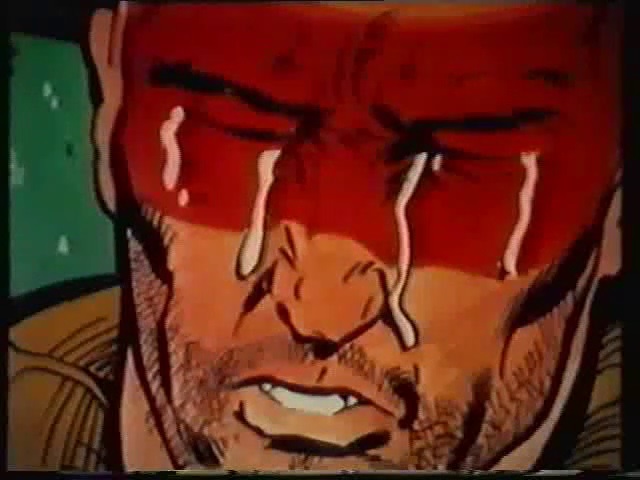 The second chapter, “Gates of Hell,” sets up more of the universe inhabited by our somewhat bloodthirsty protagonist by beginning with Ragnarok on his ship, not yet fully suited up for any type of space battle.  (The red bar across his eyes, we realize, is either make-up or part of his natural coloring.)  Answering a distress call, he and Smith explore a planet that looks to have been recently destroyed by some sort of apocalypse. 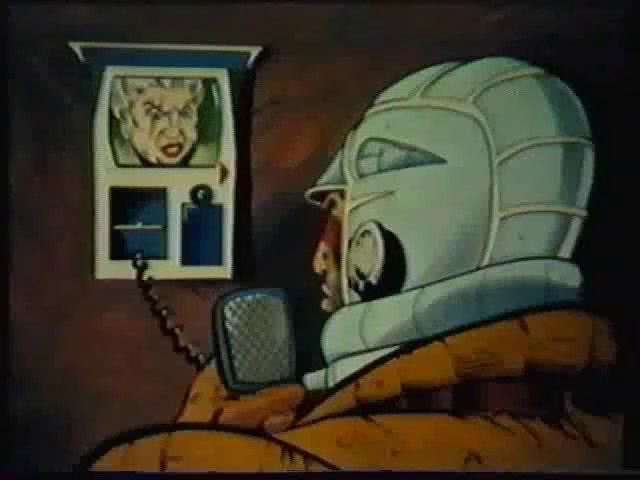 The cause for alarm ends up being Haran, a foppish tyrannosaurus with psychic powers from another universe bent on total domination, as was the style at the time.  Haran, it seems, is invulnerable, and nothing that Ragnarok or Smith do seems to have any effect.  Being a forward-thinking hero, however, Ragnarok essentially just leaves him on the planet alone with no way off, sending out a warning to others to not heed any distress calls. 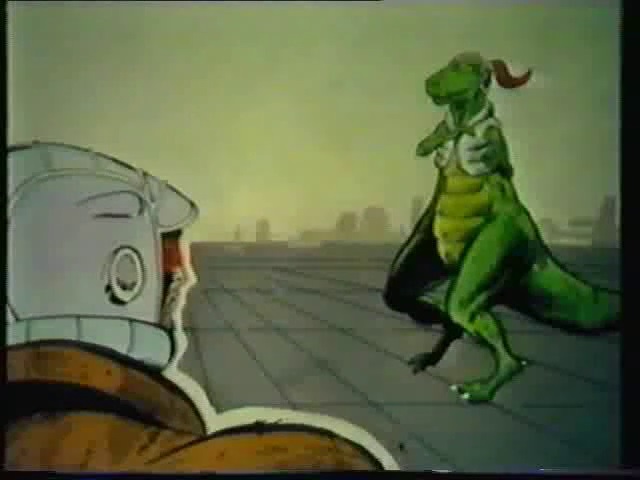 Of course, if this advice was followed, we’d miss out on the third chapter, “Sacrifice,” in which Haran escapes (and now equipped with a jaunty helmet), much to the chagrin of Mother Blood, a Granny Goodness-like character in charge of the Regulators.  As Haran attempts to conquer the universe, Mother Blood sends Ragnarok on a doomed mission to get rid of him once at for all, at the cost of the lives of various other Regulators who occasionally get to have brief dialogue before dying.  (There’s also a female Regulator, who mostly just stands around.) 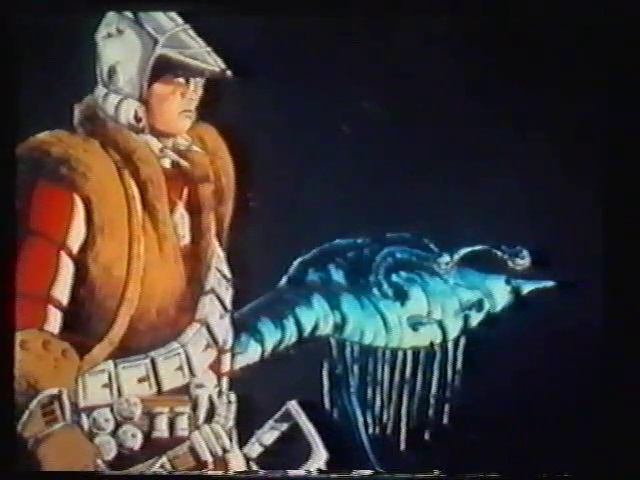 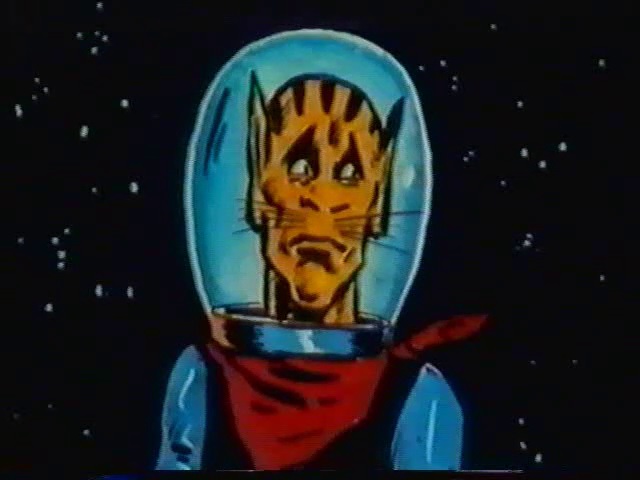 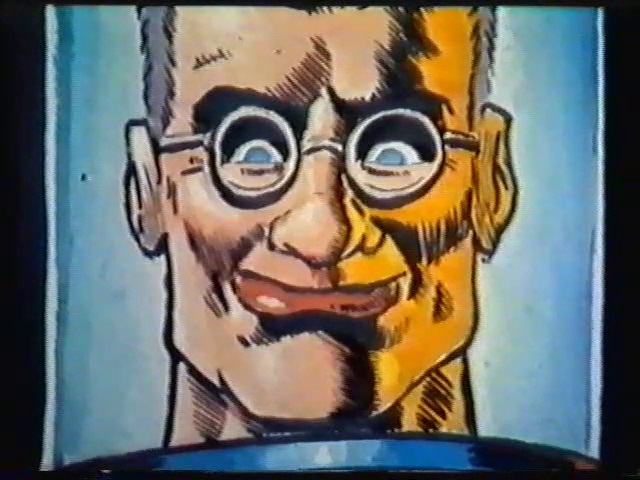 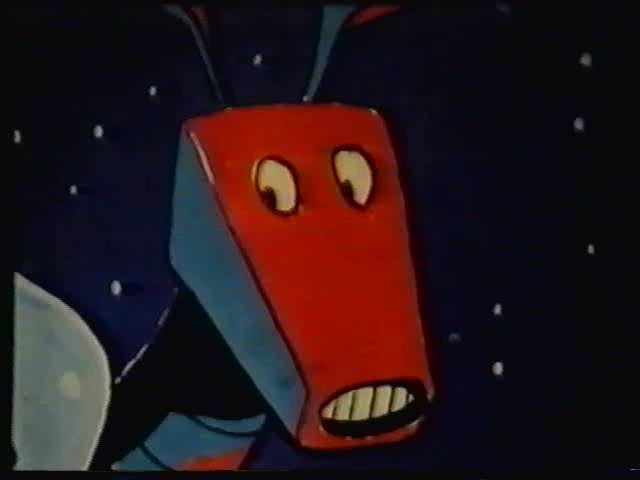 It’s all pretty standard pulp fare that, for the most part, wouldn’t look out of place in a sci-fi comic from decades prior, but there are moments of memorable dialogue and it’s difficult to not find a giant Tyrannosaurus Rex that sounds like Roddy McDowall at least a little bit compelling.  The character designs by Bryan Talbot are intriguing enough – they’re a notch above the sort of thing you’d see in the rule book for a decent sci-fi role playing game, even if they’re not always consistent, as the lead’s facial hair changes wildly from episode to episode.  The vocal talent includes Jon Glover (the English actor who worked in voice-over work, including the radio adaptation for Neil Gaiman’s “Neverwhere,” not to be confused with actor John Glover), David Tate (voices in the 1981 “Hitchhiker’s Guide to the Galaxy”), and Norma Ronald (Miss Ealand on Gerry Anderson’s “UFO” who had moved to radio work), who give decent form to the relatively thin characters.  Once you get used to the film’s minimalist style, RAGNAROK becomes a strangely comfortable piece of nostalgia, and at 75 minutes, it doesn’t overstay its welcome. 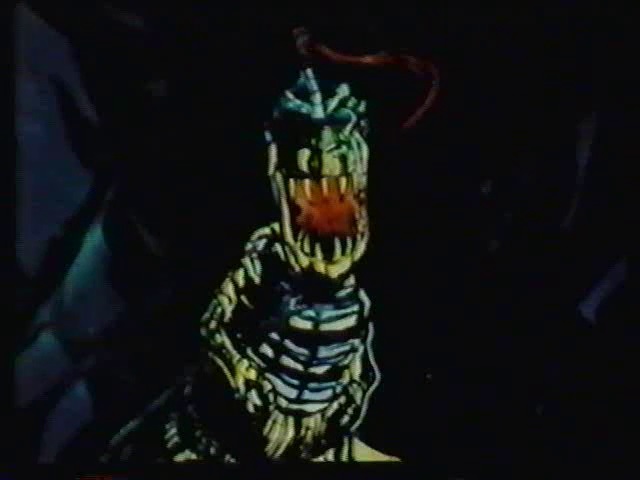 That said, there’s only the occasional moment that stands out as being the Alan Moore that the world would soon come to appreciate.  Still, it’s fantastic to finally fill in a bizarre gap in the history of one of genre writing’s finest talents after so many years.  Who knows what sort of random psychotronic oddity could turn up next?

(End note: If you still have the original character design and logo sitting around your house, you may want to let Bryan Talbot know, as he’s looking to get it back.)