He walks down the street alone at night, nervously looking an address he can’t seem to find. A car pulls up alongside him, idling, its driver making no indication of what they want. There’s a twist — the street, with its leafy trees and well-kept yards, is in the middle of tony, upper-middle-class suburbia, and the man is black, acutely aware of what it looks like for him to be walking there.

The specter of Trayvon Martin hovers over the opening of GET OUT, and its only the first shot across the bow of Jordan Peele’s accomplished debut feature. A hallucinatory racial nightmare twinged with elements of melancholy, humor and Peele’s encyclopedic knowledge of horror, it’s a potent, provocative and assured debut that harkens back to old school ’70s horror’s use of exploitation grammar as a filter for no-punches-pulled social commentary. Only here, Peele is transmuting his gift for sharp-edged racial satire, utilized to expert extent on his popular sketch comedy series with Keegan Michael-Key, into something more unnerving, more frightening. And he does even before blood is let and weird imagery dances in front of our hero’s eyes.

GET OUT is both a movie of our times, and, sadly, timeless. It evokes classic horror in its structure, but the social horror in its content is something defiantly, unfortunately, ageless. It’s in part about the daily indignities, the compromises, the little insults and micro-aggressions that black people have to go through as they wind their way through a white-dominated existence, given a subtly fantastical Grand Guignol spin. Peele doesn’t hold back, keeping toes to the fire without aiming for easy targets. It’s the first true classic of an era where the murderous mistreatment of black Americans and the official sanctioning of hate-mongers is the on the tongue of everyone who prides themselves on being “woke.”

Chris (SICARIO‘s Daniel Kaluuya) is a big city fashion photographer invited by his white girlfriend Rose (Allison Williams) to spend a weekend at her parent’s house upstate. Chris is self-conscious about what her parents will think of his blackness, and things don’t get off to a promising start when a deer nearly crashes their car and the officer responding demands his license–despite the fact he wasn’t driving. Rose’s parents (Bradley Whitford and Catherine Keener) turn out to be well-meaning white liberal types who maybe go a little too far trying to ingratiate themselves to Chris, showing off exotic knickknacks and boasting that his grandfather lost in an Olympics pre-trial race to Jesse Owens. 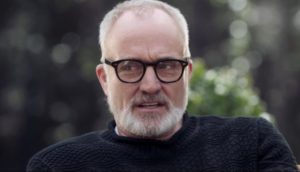 The movie is already veering into awkward and uncomfortable territory, and that’s even before any kind of horror movie horror takes place. Kaluuya plays Chris with a mix of bemusement, weariness and affable resignation — this is a road he’s clearly been down too many times before but doesn’t feel the need to fuss too much about it, accepting the Armitage family’s fumbling, white guilt attempts at proving their liberal cred with wry grace. However, his alienation in this milquetoast universe only grows more pronounced when he gets to fully meet the family’s servants, groundskeeper Walter (Marcus Henderson) and housemaid Georgina (Betty Gabriel), seemingly the only other black people for miles, overly polite and seemingly zombie-like in their natures.

It would be unfair to spoil any more of Peele’s plot, but the director is assured enough to take his time unraveling it, patiently unraveling his mystery before it all goes off the rails for Chris in the end. Peele walks a tonal high-wire act, as the film veers between astringent social commentary, broad comedy and under the skin horror. For a first time effort, the film is remarkably well done, with the fledgling filmmaker showing not only an astute sense of how to deliver his message in a way that gets bluntly across without descending into heavy-handed preachifying, but also showing a keen sense of pace and catering to genre instinct.  GET OUT deftly moves between surreallistic psychological horror, slow-burn intensity and all violent excess without short-changing any of them. It’s also genuinely hilarious; Lil’ Rel Howry shows up as Chris’s exaggeration prone best friend, and if his performance comes off as a throwback to a certain style of broadly loudmouthed comedy, Peele knows exactly how to modulate it best to use it as a break from the winding tension of the rest of the film.

But it’s Peele’s refusal to let the constrains of genre get in the way of his message — and vice versa– that marks the film’s real strengths. The director doesn’t hold back, his anger visible, his fury channelled into genre tropes. Peele and Kaluuya work together to put us on Chris’s side, so that even scenes not actively horrific are pregnant with menace. And that’s the point: this is the kind of threat Chris has to deal with on a daily basis. Cops, micro-aggressions, “well intentioned” people, the ways white people exploit black for their “exotic” prowess while denying their agency as people, this is Chris’s — and by extension, Peele’s, and every black person’s — life. And by burrowing deep into genre to tell this story, Peele only further shines a light on a horrific truth.