The hits just keep on coming, and now that we’re in the top twenty, we’ve got the characters that get thought of as the faces of the franchise, and the ones that really came off as unique within the series. Don’t worry, this thing only has one more chapter to go — unlike SOME series, we know well enough to stop at five. 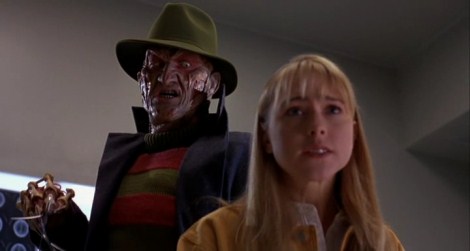 Julie doesn’t belong in Freddy’s world. She’s not involved with the films in the universe of NEW NIGHTMARE like Chuck and Terry — she’s just a babysitter for “Heather Langenkamp,” committed to her job and genuinely concerned about Dylan, the child she’s overseeing. That’s why her death is so shocking that is actually hurts. She’s completely unprepared for it, she’s not connected to the other deaths, and she seems like a genuinely nice person, thanks to a compelling performance by Middendorf. In the bounds of impact to the story, Julie is practically a non-entity, but from a character perspective, she’s much more compelling than she should be. 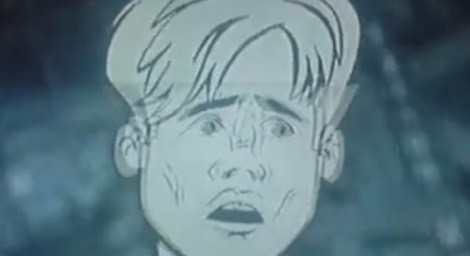 Played by: Joe Seely
Appears in: A NIGHTMARE ON ELM STREET 5: THE DREAM CHILD
Distinguishing Characteristics: The comic book-loving best friend in an ’80s frat movie

It’s really a shame that Neil Gaiman’s THE SANDMAN had just started its’ run in 1989, when Part 5 was released. Not that it would have made some great crossover fan-wank (though I’m sure it has), but because then the makers of Part 5 might have noticed it and thought, “Hey, we have a comic-book loving character. Let’s make him into more offbeat comics and do a whole animated sequence that would feel like something out of a Mobius or Ralph Bakshi cartoon.” Instead, they’ve got Mark, a potentially interesting character whose dreams get crushed when the girl with which he’s been infatuated is murdered, becoming an awkward-looking live-action superhero, forcing Freddy to become a goofy, live-action villain with lines like, “Faster than a bastard maniac!” The “Comics Aren’t Just For Kids” mentality really would have served the film well, especially since Part 5 has a significantly darker tone than the other sequels, and Mark, who actually makes a concerted effort to figure out what’s going on and prevent it from happening, gets a much sillier dream sequence than he deserves. His death, as he’s turned into paper and slashed to bits, is solid, but, seriously, the execution of the character is so almost-great that the “Super-Freddy” bit is just painful to watch. 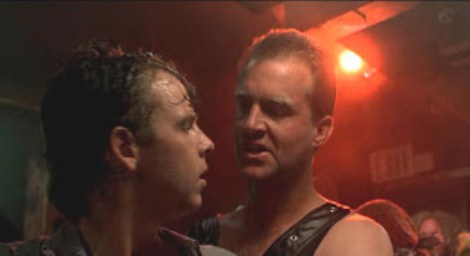 Played by: Marshall Bell
Appears in: A NIGHTMARE ON ELM STREET 2: FREDDY’S REVENGE
Distinguishing Characteristics: Disappointed that CRUISING does not represent real life.

Coach Schneider is one of the only “adults” to get caught up in a Freddy’s wrath, and probably the least sympathetic character of the whole series to end up on the receiving end of a gloving. But he’s strangely fascinating because of this — an S&M fanatic (we presume he’s gay due to Ron’s comment about him going to a “queer S&M joint,” but the joint in question seems to have a lot of real ladies in it) who takes out his sadistic pleasures on his students in gym class, Schneider shouldn’t really have any actual power over them after school hours. And yet, Jesse seems to go out of his way to find him and willfully gives in to the coach’s demands to do laps for him despite the fact that there’s no reason for him to obey. It’s a bizarre sado-masochistic relationship, sexualized even more by the fact that Marshall Bell’s bare ass is virtually the only male nudity we get in the whole series, outside of Jesse’s — when Ron rips off his pants under the coach’s watchful eye. There’s something compelling about the coach, and even if it’s never properly defined in the film, Jesse clearly sees it. 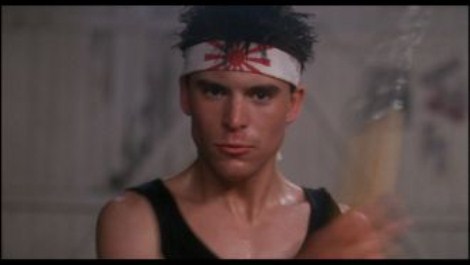 Played by: Andras Jones
Appears in: A NIGHTMARE ON ELM STREET 4: THE DREAM MASTER
Distinguishing Characteristics: Christian Slater, circa HEATHERS, mixed with some rockabilly.

When I watched this series in high school, I though Rick was the coolest. He knew martial arts, he was supportive of his sister, and he had a goofy attitude. On retrospect, however, he’s kind of lame, essentially a distilled version of everything that was supposed to represent “cool” in 1988. Yes, technically he teaches Alice some kicking, but she doesn’t really figure it out until he transfers his abilities to her after he dies. After falling asleep on a toilet. Seriously, Rick, you’re supposed to be cool. Don’t go out like Elvis. 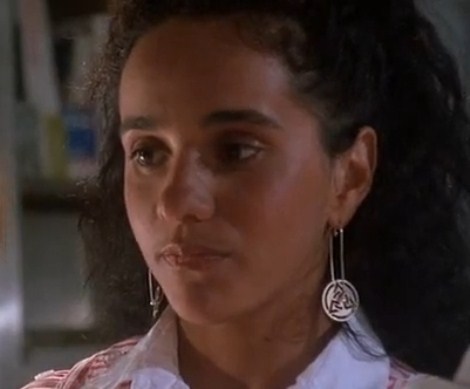 Kelly Jo Minter had a surprising string of genre titles to her credit in the late ’80s and early ’90s, including POPCORN, THE PEOPLE UNDER THE STAIRS, THE LOST BOYS and this, and she almost always played a character that saw the end credits, not an easy feat for a non-caucasian actress of the time. All of her characters have “spunk” in the best of ways, so you’re generally happy that she makes it though. In Part 5, her character Yvonne spends the first half of the film on the outskirts of the Freddy story, not believing any of it and focusing on her diving and her job as an obstetrician’s assistant (how the hell she had any time to study is beyond me) at least until she’s attacked by Freddy himself. Then she’s all business and sets forth to release the mystery nun to set up the climax. She’s a needed character in the film, one that serves as the group’s skeptic while still having the decency to actually apologize when she makes an outburst. It’s probably best that she didn’t return for a sequel, as she would have been obvious cannon fodder, but as it is, it’s Yvonne-1, Freddy-0. Plus, she was in MR. T’S BE SOMEBODY: OR BE SOMEBODY’S FOOL. How can you beat that? 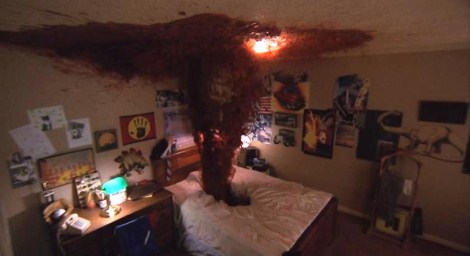 Often remembered: Johnny Depp was in A NIGHTMARE ON ELM STREET, and him getting sucked into his bed, and then spat out in a giant gushing geyser of blood, is one of the most memorable images of the series. Less remembered: Glen is virtually useless. He tries to help out by giving Nancy information on not letting dreams control them, which I suppose, technically work in the end, but he’s so bad at staying awake that you’d think he was going to go to Idaho with Keanu Reeves to hunt for his mother. Not only does he fall asleep while preparing to watch “Miss Nude America,” causing his demise, but he sneaks his way into Nancy’s room, then promptly falls asleep after she asks him to do the simple task of staying awake — what was his plan? Was he going to pass out on her floor and hope that she kisses him awake like Sleeping Beauty? If you’re going to go through the effort to sneak into your girlfriend’s room, you should probably make sure you have enough energy to actually do something. The movie may have ended a half hour sooner if Glen had just had some damn coffee. 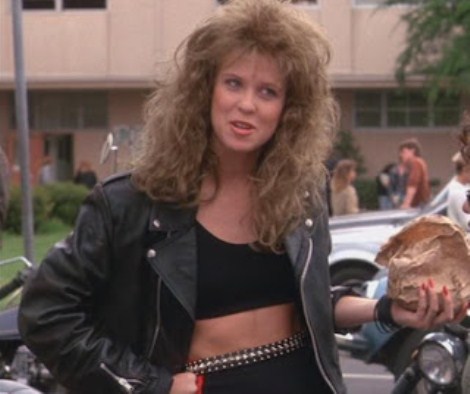 Played by: Brooke Theiss
Appears in: A NIGHTMARE ON ELM STREET 4: THE DREAM MASTER
Distinguishing Characteristics: Big hair, works out, scared of bugs.

Debbie probably could have made good on Kincaid’s promise of ass-kicking all over dreamland if she wasn’t afraid of bugs, giving her the ickiest death scene of Part 4. Despite the fact that she’s a relatively minor character, she comes off like an amazon powerhouse when she’s on screen, possibly due to the hair. She believes the Freddy story pretty easily and sets her sights on beating him with pure, raw buffness — sure, it wouldn’t work, but you’ve got to admire the effort. Of course, if she wasn’t afraid of bugs, she’d probably have gone out by having Freddy pump her full of steroids and making her muscles explode or something. Still, having two personality-based death options is better than just getting an axe to the head. 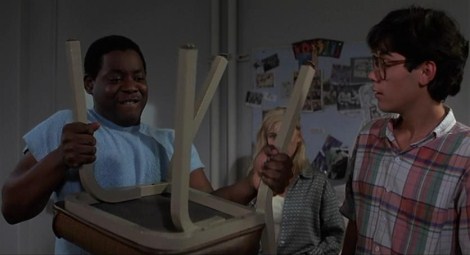 Kincaid’s a bit of a loose cannon, but at least he’s fun to watch. His dream powers, basically just being really strong, are pretty useless, but they do allow him to break stuff. He gets points off for having the stupid dog with the resurrection piss, but at least he tries to warn the others before Freddy offs him. What does Joey do? Nothing. It’s just about the tits. Screw you, Joey, again. 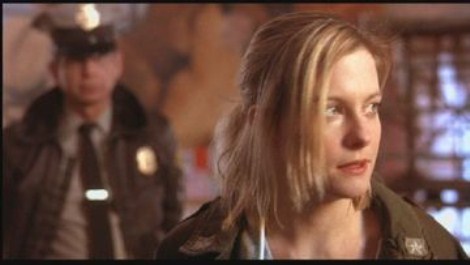 Played by: Lezlie Deane
Appears in: FREDDY’S DEAD: THE FINAL NIGHTMARE
Distinguishing Characteristics: A young Jodie Foster in a story of a boxer with issues.

Apparently, people hate this character. According to the Elm Street wiki, she “has very little [sic] redeemable features… She frowns almost throughout the whole movie. She is by far one of the least popular heroines of the series.” This boggles my mind, as she’s really the most interesting character in FREDDY’S DEAD, it’s just that she belongs in a better, more serious movie. A victim of sexual abuse by her father (played by Jim Wynorski regular Peter Spellos), it’s not surprising that she’s so aloof to others, and the fact that in her dreams, she seems much more frightened by the re-appearance of her dad than Krueger himself makes her unique among his would-be victims. Sure, she’s surly and some of the dialogue seems a little off at times, but in a proper Elm Street film, she would have been a force to be reckoned with. 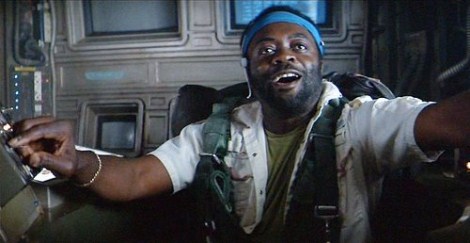 Played by: Yaphet Kotto
Appears in: FREDDY’S DEAD: THE FINAL NIGHTMARE
Distinguishing Characteristics: Not getting paid enough for this crap, either as an actor or a character.

Seriously, Yaphet Kotto kicks ass in anything, even when he’s given little ass to kick and the most unfortunate hair of his film career. Granted, he spends most of his time in his office, idly collecting a paycheck, but it’s his lucid dreaming that allows the characters to actually do anything — those that survive until the final act, anyway.