Cameron Macgowan’s RED LETTER DAY is a satirical look at the implicit violence underneath suburban middle class mores. An interesting theme, though it’s one that’s been done many times before, especially in horror. Wes Craven was, of course, the king of this sort of thing in the 1970s and 1980s. Even better, RED LETTER DAY has the distinction of not just re-treading familiar genre tropes, but also sharing more than a few similarities to THE PURGE. 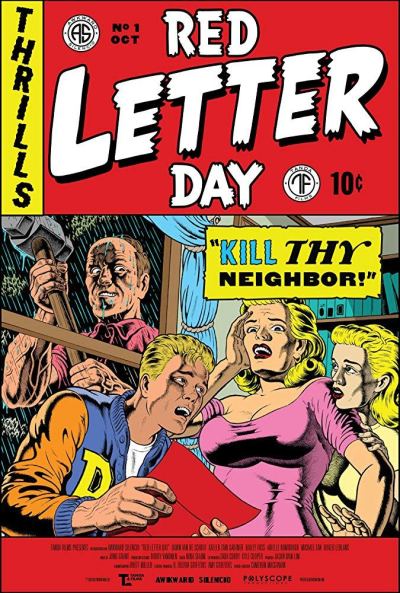 An entire neighborhood (later we learn it’s an entire city) is sent a one-page letter in a red envelope. The letter contains the name and a picture of a person who lives in the neighborhood and holds a different political or social worldview from the recipient. Then it urges you to kill them before they kill you. It’s a bit of a shaky premise right from the start. I mean, unlike THE PURGE, the letters are sent by a terrorist organization. The killings aren’t sanctioned by the government. Murder is still a crime, so one assumes you could and would get tried for it if you got caught. And anyway, who doesn’t already hate their neighbors? I make it a point not to get to know mine. Living in a middle class neighborhood, I figure just about everyone has abhorrent views that I wouldn’t agree with, and I’ve long suspected that my neighbors probably think the worst of myself and my wife, what with my habit of doing bare minimum lawn maintenance (fucking city threatening to fine me if my grass gets too high), and our two chihuahas who bark like idiots at two in the morning. That’s just what you do in a suburban neighborhood: You smile and wave at your neighbors, all the while figuring they’re some sort of degenerate, pervert, terrorist, or a combination thereof. You don’t need a letter to tell you that.

All this is to say I didn’t buy the premise, but I was more than willing to give the film a shot. It looked like a lot of fun, and plenty of movies with unoriginal or unbelievable premises turn out to be a lot of fun. And RED LETTER DAY was a lot of fun, though only in fits and starts. Sure, the dialogue is bad and the acting is a whole lot of just okay, and the drama falls flat, but when there’s violence, there’s gore, and when there’s gore, Macgowan is a hell of an artist.

In fact, the opening scene shows a lot of promise. A paranoid guy steps in a pile of glass on the sidewalk, and the wound it creates is so deep you can almost see the meat inside. The damn thing looked so damn gruesome that I almost turned away for a second – something I rarely feel the need to do, even while watching Italian cannibal movies. Now this was good stuff.

And then… nothing. Well, not nothing, of course, but there’s over thirty minutes of setup before we see any more gore. This wouldn’t be a problem if the drama and “comedy” were at all interesting, but, well, you know. We’ve got the whole single mom thing, and a brother and sister that antagonize each other but, of course, they really love each other deep down. We’ve also got the inevitable confrontation with a neighbor that just goes on for way too long, some speculation about the nature of the terrorist organization behind all this, more bitching between the brother and sister, and the good girl dating an older bad boy trope. Stuff we’ve seen plenty of times before, and done better in a lot of cases. It’s all just… pretty boring.

I wish I could say that I found anything other than the violence interesting, but here we are. In fact, the only time I laughed during this supposed comedy was during a scene involving a neck spurting blood, a rotisserie chicken, and a very large knife. Now that was some good stuff.

The gore is just so visceral and affecting that when it’s on the screen, the movie really, really, works. If Macgowan could have put a better story around all of that, we would have really had something.

RED LETTER DAY has just been released on Blu-ray by Dread, an Epic Pictures subsidiary label formerly known as Dread Central Presents. The special features include a commentary and two featurettes. The commentary is by Macgowan and his cinematographer and executive producer. They’re old pals from film school and they just kind of hang out and shoot the shit about the film in an informal sort of way. Pretty fun stuff.

This might sound harsh, but my favorite part of the disc, including the feature, was the thirty-minute interview with Tiffany Helm, who had a short cameo in the movie. Helm is probably best known as Violet from FRIDAY THE 13TH PART V, and she’s had quite an interesting career as a character actor. The interview is a fascinating portrait of a cult film actor who never really made it big, but had a lot of fun along the way.

Even though I wouldn’t recommend RED LETTER DAY to anyone who isn’t at least mildly blackout drunk, I very much look forward to seeing what Macgowan does next. He and his crew are very good at action scenes and gore. All he really needs to do is punch the writing up a bit, and he could definitely make some interesting stuff in the future.