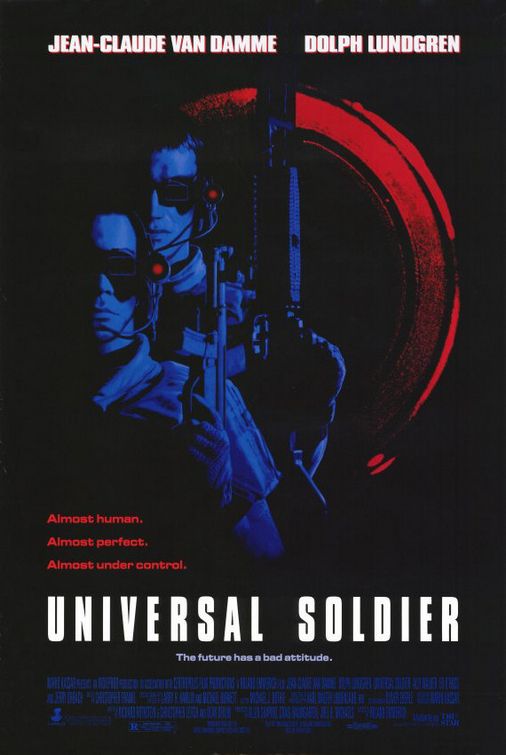 UNIVERSAL SOLDIER was directed by Roland Emmerich, the man most famous for destroying a handful of major cities in INDEPENDENCE DAY, along with a lot of other films with similar amounts of destruction but with far less rewatchability. Story credit goes to Richard Rothstein (writer on THE BATES MOTEL – Bud Cort, not Freddie Highmore) and Christopher Leitch (television director-for-hire), but the screenplay credit goes to Emmerich’s one-time writing partner Dean Devlin (whose collaboration with Emmerich ended after the disastrous GODZILLA remake). It’s when one compares UNIVERSAL SOLDIER against the rest of Emmerich’s directorial career when the realization sets in just how special the film actually is. And if you’ve seen UNIVERSAL SOLDIER, you’re probably laughing out loud, but, it’s true. One of the very few films in Emmerich’s filmography to receive an R-rating (and one well deserved), UNIVERSAL SOLDIER surprisingly shows off a side of the director who’s more than willing to get down and gritty with the violence the story demands. Between this and the director’s other R-rated effort, THE PATRIOT, a reasonably entertaining film which manages to survive drowning in its pervading feeling of self-importance (but which has that super-eerie monologue where Mel Gibson recounts mutilating the bodies of dead soldiers), Emmerich clearly enjoys these darker stories, and it’s a shame his career has been mostly relegated to Michael Bay-like extravaganzas of family-friendly special effects and gimmicky storytelling. 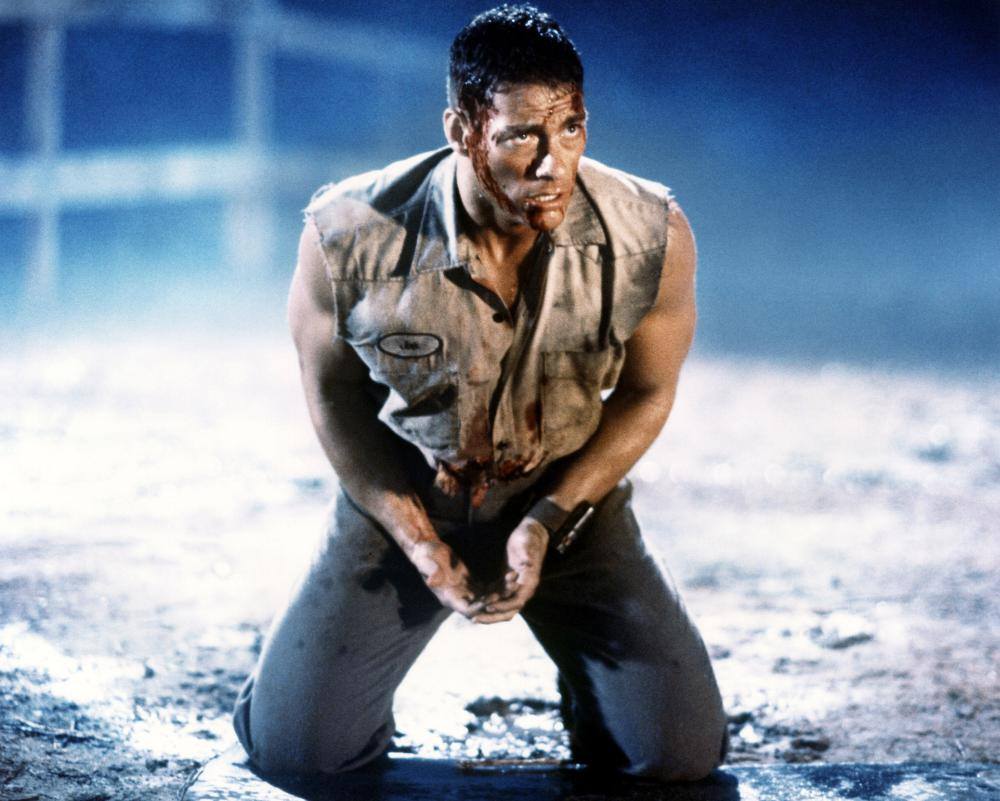 UNIVERSAL SOLDIER drips with everything action aficionados demand: an appealing and established lead hero (Jean-Claude Van Damme) and villain (Dolph Lundgren), a sexy and spunky femme sidekick (Ally Walker), a healthy dose of violence, an even healthier dose of senseless destruction married to seas of broken glass, consistent and cheeseball humor, and perhaps most importantly, an utter and definitive display of superiority committed by our hero against all the other hapless meat puppets who for whatever reason believe they’re worthy of even breathing his air. To be specific, the diner scene. To be more specific, who the fuck is this eleventh guy who tries to throw in against the clearly invincible Luc Deveraux (Van Damme) and think that he’s going to be the one to take him down – that he’ll be victorious where the previous TEN DUDES failed? This particular trope is a well that’s gone back to repeatedly in this genre, and it’s one that will never grow tired. 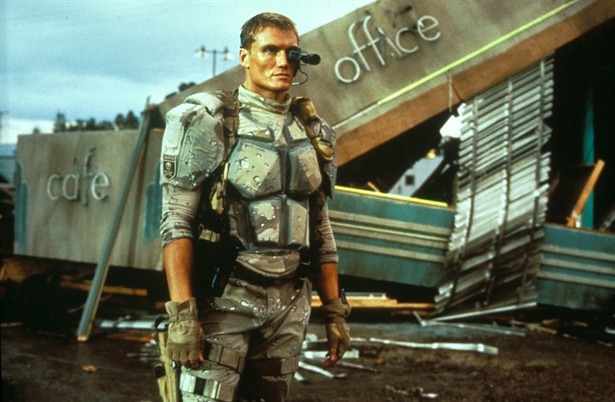 Not surprisingly, UNIVERSAL SOLDIER was torn apart by critics upon its release, many of them labeling it a cheap imitation attempting to ride the coat tails of TERMINATOR 2: JUDGMENT DAY. The Austin Chronicle quipped, “UNIVERSAL SOLDIER may flex its muscles at every opportunity, but it’s still second-rate Schwarzenegger.”

The new 4K UHD presentation of this title is excellent, finally righting some wrongs from Lionsgate’s previous Blu-ray, the greatest sin being the poorly applied digital noise reduction, giving everyone a waxy, artificial look. The new image looks fantastic, returning the film to a more natural filmic appearance with the appropriate amount of grain. (If you’re a UNIVERSAL SOLDIER enthusiast who has yet to make the plunge into the world of 4K UHD, you’ll be pleased to know that the new standard Blu-ray packaged with the 4K discs also sports the new transfer.) The audio presentation is excellent as well, in the form of a DTS-HD MA 5.1 track. UNIVERSAL SOLDIER was made to be played LOUD, so don’t disappoint it. 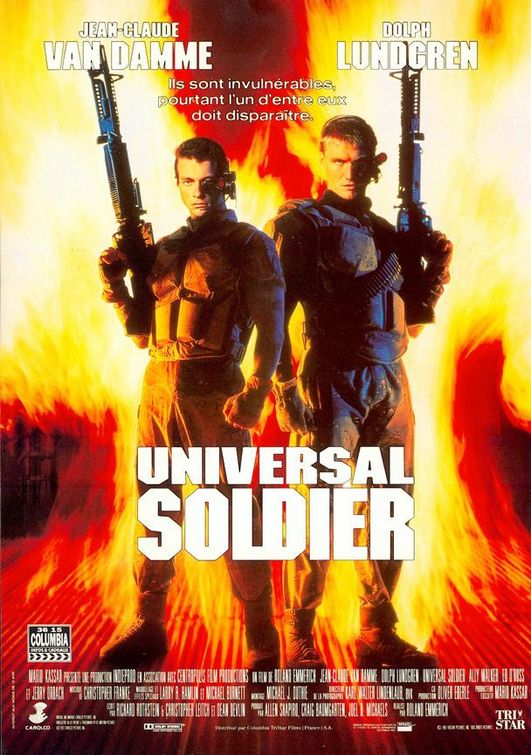 All special features are recycled from previous home video releases and their contents appear on both discs. 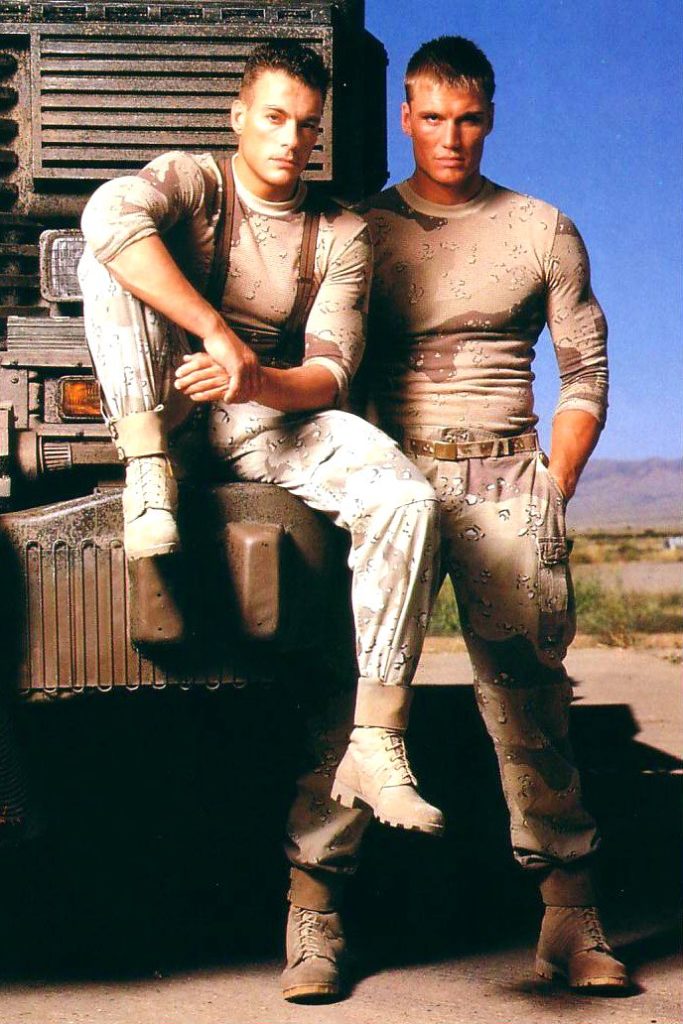 UNIVERSAL SOLDIER is innocent, carefree, and perhaps even the quintessential “silly” team-up action flick (second only to TANGO & CASH). There’s just enough of a plot (albeit not a terribly original one) to give it a solid foundation, and that plot is silly enough so that you know not to take everything so seriously. Emmerich was wise enough to realize that his paying audience was interested in seeing Van Damme and Lundgren tear ass at each other for a full 90 minutes, and by making them super soldiers mostly incapable of inflicting any permanent damage on each other, that ass-tearing could go on and on and on. This simple 1992 film would go on to spawn a franchise of direct-to-video sequels, attempts at a television series, and even an art-house film festival darling, all of which went off in very different directions, but none of which would retain (or even necessitate) the wonderful tongue-in-cheek and knowing humor that permeates this cinematic match-up between two of the best action superstars who ever walked the soundstage.