Oh, What The Hell… 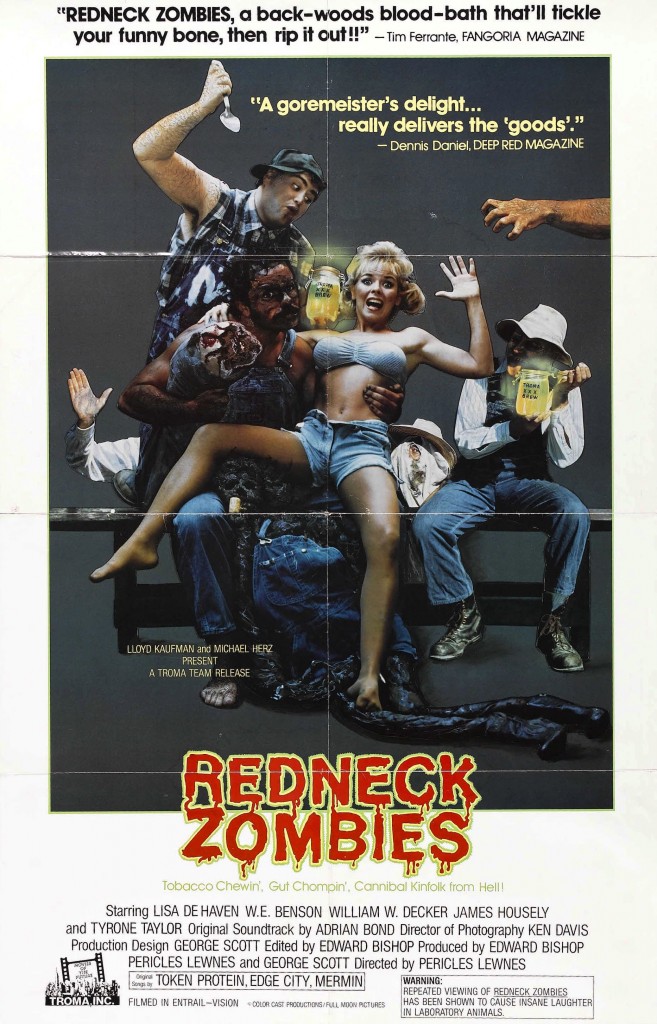 There must be something in the water in Maryland, because I honestly think no other state has produced more backyard cinematic auteurs. I’m not talking about Baltimore-born-and-bred Oscar winners like Barry Levinson here. No, I’m thinking more the kind of guys who figured all they needed to make a movie was either a 16mm camera or hand-held VHS camcorder, some friends, a few thousand bucks, and most importantly, the will to just get out there and get the job done. The kind of guys who watch a movie and think: “Heck, this shit doesn’t look that hard, I bet I could do it!” Maryland’s been damn generous when it comes to producing movie-makers of this ilk: John Waters, Don Dohler, and Tony Malanowski all hailed from there – each with less ability, experience, and money than his predecessor, but arguably more determination. The name Pericles Lewnes should be added into that list somewhere as well. I’m just not quite sure where.

Who, you say? And why the uncertainty as to his placement in the dime-store pantheon?

Like the other esteemed folks mentioned, Lewnes hailed from the Baltimore suburbs, and didn’t know anything in particular about movies other than the fact that he wanted to make one and had some like-minded acquaintances (a good many of whom chose to have their work on his picture credited pseunonymously — hence the deliberate lack of names you’ll find for the balance of this review) who were willing to chip in with the scripting, acting, and “special” effects. So, in 1989, he set out to make the most outrageously stupid movie he could think of: a tongue-in-cheek (to put it mildly) shot-on-video splatterfest, with perhaps one of the more deliberately take-it-or-leave-it titles in cinematic history: REDNECK ZOMBIES. Whether or not Lewnes and company were aware of the earlier super-8 effort out of Texas, OZONE! ATTACK OF THE REDNECK MUTANTS, I have no idea.

The total budget for their movie was just under $10,000. It was shot in Maryland farm country, and the “plot,” such as it is, can be summed up more or less in one sentence: “Incompetent army fuck-up loses barrel of ‘chemical warfare toxic waste’ (the script’s exact words) somewhere in the sticks. Local inbred hillbilly clan uses said barrel as part of their new still, green moonshine comes out, and everyone who drinks it turns into a zombie. Gory hijinks ensue when a group of city-folk campers (who apparently barely know each other, and can’t seem to talk about anything other than sex and how fucking tired and/or lost they are) encounter aforementioned redneck mutant zombies.” Damn if that wasn’t the quickest and easiest story recap I’ve ever churned out in a couple years of movie blogging.

So, that’s who Pericles Lewnes is, and what he made. Now, as to why I’m not quite sure where he should fit on the list of homemade movie-makers out of Maryland — 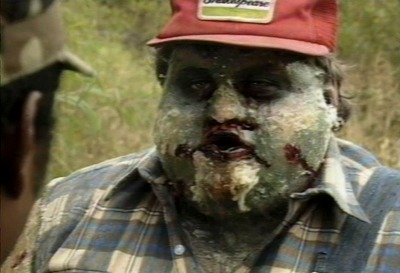 “Care to try a drink from our new still? I just had one…”

First off, chronologically speaking: Waters preceded Dohler, who preceded Malanowski (who got his start working for Dohler), and they all preceded Lewnes. But Lewnes shot his first movie on video, and all those other guys shot on film. Furthermore, Lewnes had a very specific goal in mind for his picture — he wanted it to be the first-ever (so he thought, in truth BOARDINGHOUSE beat him to the punch by a few years) SOV feature to be blown up onto film and distributed for theatrical release; a pretty lofty ambition for a guy with no cinematic experience whatsoever — and damned if he didn’t get his wish. Troma picked REDNECK ZOMBIES up, and it got some east coast movie-house play, before enjoying a long and semi-prosperous run in the home video rental market. That’s the first key difference between Lewnes and his Maryland-based cinematic progenitors.

Next up is the budget: Lewnes hustled up $10,000, which is frankly a bit more than probably Dohler and certainly Malanowski had to work with during their earliest forays into movie-making; and unbelievable as it sounds, this actually proved to be more than enough to produce some pretty damn solid (for the homemade variety, mind you) gore effects. It’s pretty clear this is where the money went. The atrocious acting “talent” probably didn’t cost a dime, but at least they’re having a good time hamming it up. 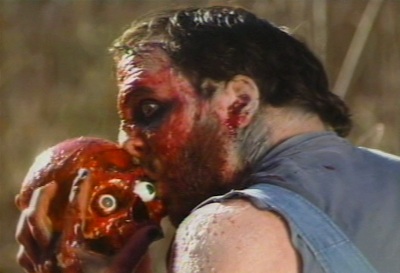 Following the budgetary differences, we have the issue of actual technical competence, and for that we need to get a bit hypothetical. Certainly if you gave Don Dohler a couple million bucks, he could at least deliver some solidly cool special effects, but you would probably still get straight-forward “point-and-shoot” style camerawork and a script about a killer alien or three on the loose in the woods being hunted down by townsfolk (in this case played by, I dunno, Brad Pitt and Sylvester Stallone or something), with no self-aware humor whatsoever. If Tony Malanowski had a Hollywood-sized budget, you’d probably get a semi-respectable middling-quality “supernatural thriller” of some sort. In short, both of these guys took their jobs seriously. Lewnes, quite obviously from the get-go, doesn’t. But that doesn’t automatically mean he’s a bad filmmaker. He’s just a guy who has no illusions that he’s making anything other than a bad film (or video, as the case may be). REDNECK ZOMBIES knows it’s a piece of crap right out of the gate, and never tries to “rise above” its blatantly less-than-humble origins. Lewnes, operating without the budget to actually scare you, is more than willing to settle for grossing you out and making you laugh instead. 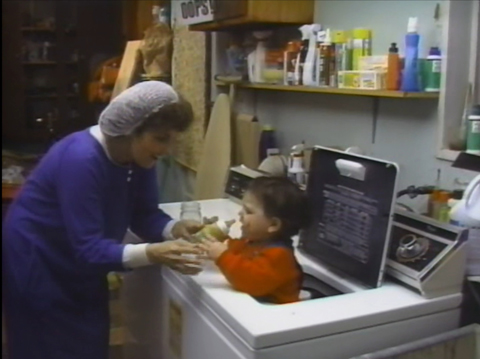 Beyond all the obvious and stupid laughs – a baby drinking moonshine! a gay hillbilly! dick jokes! – there is, dare I say it, some intelligence at work here — the “tabaccky man” scene, with a backwoods tobacco farmer hustling his produce while dressed as the Elephant Man and talking like, I dunno, the Angel of fucking Death or something, is both hilarious and genuinely unsettling, and shows that Lewnes has probably at least watched, if not understood, a Bergman flick or two. The lame-brained spoof of the infamous hitchhiker scene in the original TEXAS CHAIN SAW MASSACRE shows that he’s counting on most of his audience to at least have enough intelligence to get an admittedly blatant in-joke. So who knows? To return to our “If you gave these guys a budget” hypothesis, maybe with a couple million bucks, Lewnes would have produced a seriously sardonic black comedy of some sort. 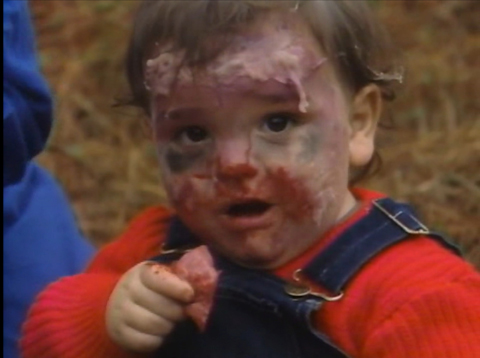 …shouldn’t be too surprised when this happens.

It’s this reviewer’s steadfast belief that if more “dumb movies” were as smart as this one, then more of them would be entertainingly stupid – rather than just stupid. Troma released the definitive 90-minute “Director’s Cut” as part of their “Tromasterpiece Collection” DVD series (it’s billed as the “20th Anniversary Special Edition”). Picture (full-frame) and sound (mono) have both been remastered, and are of respectable-enough quality. Extras include a pretty good commentary track from Lewnes, a selection of outtakes and deleted scenes, a plethora of interviews, trailers for some other Troma product, and the usual annoyingly unfunny Lloyd Kaufman ego-boosting crap. It’s literally a packed-to-the-gills release, and even includes the complete original soundtrack score on a second “bonus disc.” Good stuff, Maynard.

If you’re up for a swim on the absolute bottom of the SOV barrel, REDNECK ZOMBIES is a fun way to waste away an hour and a half of your existence. It knows what it is, knows that you know it too, and never thinks you’re an asshole for digging this kind of —- uhhhmmm — “entertainment.” It’s reasonably well-executed, refreshingly self-aware, and completely devoid of even the basic ability to sets its sights any higher. That’s never going to make it a “respectable” piece of movie-making by any stretch of the imagination, but it never figured to be, and frankly could care less. Who can’t go for a little bit of that once in awhile?