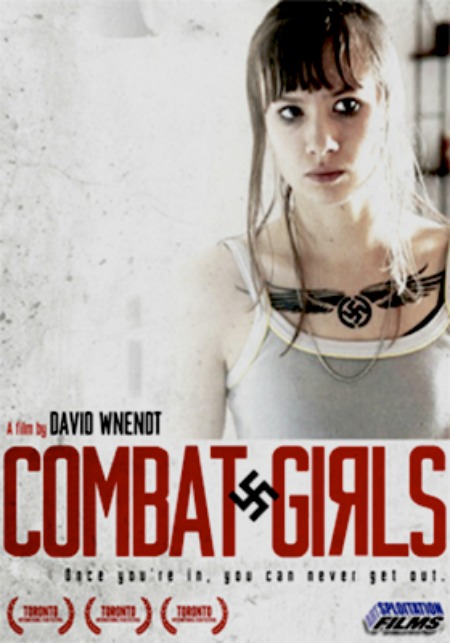 LOS ANGELES (June 10, 2013) – Artsploitation Films, the rising American film company, continues to deliver edgy international movies to North American audiences with its latest release, COMBAT GIRLS. This searing coming of age drama follows two suburban girls from vastly different backgrounds who become ensnared in the Neo-Nazi youth movement. Twenty year old Melissa (a stand-out, powerhouse acting performance from newcomer Alina Levshin) is a hard-core believer, a semi-skinhead who is adorned with Nazi tattoos. Fourteen year-old Svenja (Jella Haase) is a sheltered, spoiled, straight A student who becomes fascinated with the group because of her Neo-Nazi boyfriend. They began as adversaries but soon become best friends though their loyalty to each other is shaken when Marisa decides she wants to leave the group. Like American History X and Romper Stomper, COMBAT GIRLS is extremely dynamic, powerful filmmaking.

Artsploitation’s release of COMBAT GIRLS will arrive on DVD, VOD and Digital Download for the first time ever on July 9. The DVD extras include an interview with Alina Levshin and an 8-page booklet.

For additional information regarding COMBAT GIRLS please contact Christoph Buerger at (323) 868-7611 or christoph@davidlynch.com.

About Artsploitation Head Raymond Murray: Murray is the co-founder of TLA Entertainment Group and its president/CEO since its inception in 1981. Over the years, the company has operated art house cinemas and later, award-winning video stores in New York City and Philadelphia. Today, the company runs www.tlavideo.com, one of the country’s largest online DVD/VOD sales sites. Murray also founded and continues to be the Artistic Director of Philadelphia QFest and was Artistic Director of the Philadelphia Film Festival (2001-10). In 2000, Murray and partners launched TLA Releasing, a film distribution company that released films in North America. The company expanded its focus with the launch of the genre-focused Danger After Dark label in 2003. In 2004 it opened an office in London and expanded operations in the UK. Prominent releases include Suicide Club, Latter Days, Death of a Dynasty, Another Gay Movie, The Trip, Adam and Steve and Sleeper Cell.