Welcome back to The Wall, ya bunch of delinquents. This week we have haunted houses, horror legends, and some bad action for good watching. The big release this week is the AMITYVILLE HORROR TRILOGY hitting Blu-ray from Shout/Scream Factory. These are finally being given a quality treatment and come packed with special features including commentaries, new interviews, and more.

Other notables this week: 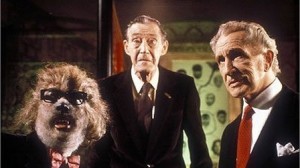 THE MONSTER CLUB: a horror anthology with John Carradine, Vincent Price, Stuart Whitman, Donald Pleasence, and a bunch of other “aw shit he’s in this too?” actors that pop up from time to time. This is a really underrated gem that actually benefits from its low production value and campy as hell nature.

THIS IS THE END: This flick is going to have huge re-watch for me. I really dig all the actors playing these hyper-realized versions of themselves as the world around them crumbles. Hands down the best Jonah Hill Gets Raped movie I’ve seen. Fuck you, MONEYBALL.

HOUSE OF WAX 3D (and 2D): Timeless horror classic. Still don’t have a 3D TV yet, but if you do, I will trade you this fine Casio wrist watch. Hello?

FRIGHT NIGHT 2: Better than it has any right to be. Seriously, watch this and tell me I am wrong.

The complete list of new releases is below along with links to pick-up the films and help out the site a little. Next week CORRUPTION from Grindhouse Releasing makes its debut, HOT NIGHTS OF LINDA from Severin, THE PURGE, and finally, AFTER EARTH arrives to prove to a home audience how terrible it is. Aw,just kidding M. Night, I actually kind of liked it. Yes, I am serious. Until next week… Kirk out.