If for nothing else, THE BLAIR WITCH PROJECT will go down as a classic in horror cinema for its genius marketing campaign. Taking advantage of the internet in ways that hadn’t been done before, the filmmakers and marketers of the film were able to create a mystique that could never be duplicated. Over fifteen years later, the world is a much different place than it was when THE BLAIR WITCH PROJECT first hit screens across the world. It’s not quite the same thing, but the producers of the new BLAIR WITCH managed to keep its existence a secret up until fairly recently. In a world where fans know everything about movies years before they hit the big screen, that’s an impressive feat. It doesn’t quite match convincing people your movie is legitimate footage of an ancient evil killing people in the woods, but it’s impressive nonetheless.

It also makes sense from the standpoint of managing expectations. Even the most die-hard “Blair Witch” fans had probably given up on another sequel. Announcing much further than a couple of months in advance would have given audiences time to get the hype machine running overtime. Any sequel to such a hugely popular and influential film is doomed by expectations regardless; giving audiences a little less time to get their expectations up was a smart move. That’s not to say that BLAIR WITCH is not worth watching, but director Adam Wingard and his regular screenwriter Simon Barrett had what amounted to an impossible task before them in taking on a sequel to a horror film that has become a major cultural touchstone. The result is a very good “haunted house”-style “found footage” horror movie packed with loud noises, jump scares, and some genuine unease. Whether it’s a very good “Blair Witch” movie is another question.

The film opens with a title card explaining that the movie was assembled from footage found on DV tapes and memory cards discovered in the woods near Burkittsville. James (James Allen McCune), the younger brother of Heather (Heather Donaue) from the first film, thinks he has found a video online recently recovered from the woods that shows Heather alive. His friend Lisa (Callie Hernandez) wants to make a documentary on James’s search for the truth about his sister, and so joins him along with Peter (Brandon Scott) and Ashley (Corbin Reid). When they get to Burkittsville, they meet Lane (Wes Robinson) and Talia (Valorie Curry), the young couple who found the tape, and the six of them strike off into the woods. 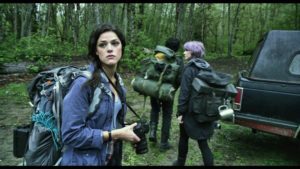 From this point, things start to seem familiar. Loud noises wake them up in the night, and creepy stick figures start to appear around their camp site. This time out, though, Wingard and Barrett have opted to go much bigger. Where the original film was all about the relationship between the three leads and their increasing despair, this one is all about big, loud scares. It’s the Blair Witch as invisible kaiju, knocking over trees and sending tents soaring into the air. When the survivors finally reach the house where the first film ended things start to get creepier on a more personal level, but the charm and personality of Wingard and Barrett’s previous collaborations all but disappears by the end of the first act when the characters stop relating to each other and start screaming each other’s names repeatedly.

The result is a “found footage” film that is exceptionally well made, particularly in its unnerving and disorienting sound design, but is otherwise not a whole lot different from any number of other “lost in the woods” films of this type that followed in the wake of the original film. It’s perfect for Halloween viewing on the big screen with a packed theater of people looking for thrills and reasons to grab their dates and hold on tight. But THE BLAIR WITCH PROJECT wasn’t about jump scares, and even the sequel barely had a sense of humor. BLAIR WITCH shifts the property into more obvious franchise territory as a shrieking, banging funhouse that shares the same basic ingredients of the original film but takes a totally different approach to scares. 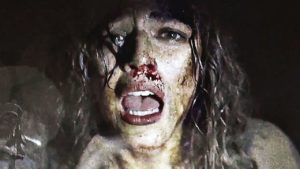 It’s great for some popcorn-tossing fun, but it’s kind of a shame it had to come out around the same time Stephen DeGennaro’s FOUND FOOTAGE 3D is hitting horror festivals. That film does some really new and inventive things with what has become a tired style of horror. In contrast, BLAIR WITCH basically does the same things we’ve come to expect from seeing countless times before, even if it does do them very well. Whether that’s enough to make BLAIR WITCH the new PARANORMAL ACTIVITY remains to be seen.