Directed by Marvel Comics artist Kaare Andrews and written by Jake Wade Wall (2007’s THE HITCHER), CABIN FEVER: PATIENT ZERO is the third installment in a franchise begun by Eli Roth in 2002.

The film opens with Porter (Sean Astin) being rescued by people in hazmat suits from a horrifying scene of death. Porter is a carrier of the killer flesh-eating disease, but is himself immune. He becomes a guinea pig in a hidden medical facility while Dr. Edwards (Currie Graham) tries to find either a vaccine or a virus-killer. 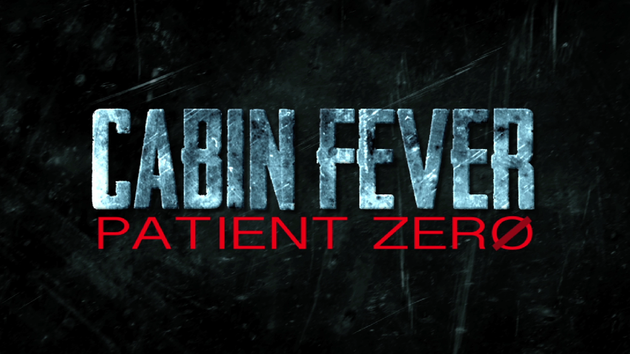 Meanwhile, Marcus (Mitch Ryan) and his friends Dobbs (Ryan Donowho), Josh (Brando Eaton), and Penny (Jillian Murray) head out to a deserted island for a bachelor party before Marcus’ impending marriage to Katia (Claudette Lali), who comes from a powerful and wealthy family. Their little party ends up on the same unmapped island as the medical facility that houses the deadly virus. Josh and Penny go snorkeling in contaminated water. Marcus wants to help his friends while Porter wants to escape the lab.

I’m generally not a fan of sequels. They almost never live up to the original and only serve to make a quick buck. CABIN FEVER: PATIENT ZERO is no exception, although it does have some bright spots going for it. 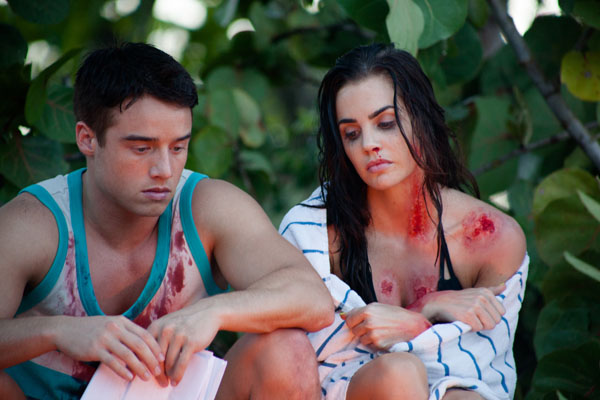 Marcus and his friends are the standard one-dimensional idiots you would expect, the clichéd fodder for death and mayhem. Penny is nothing more than an added dose of estrogen, there to provide a rather unbelievable and rather disgusting sex scene with Josh, the muscle-bound jock who has nothing going for him. I mean, come on, is she really going to want to have sex as sick as she is?

Dr. Edwards is, predictably, out for his own fame and glory, not just content with finding a vaccine, but seeking a way to kill the virus outright. He even manages to convince his assistant to enter a quarantine area holding a very sick patient without putting on a hazmat suit for protection. A scientist who is that dumb? In this flick, yes. After all, the disease has to spread in the most gruesome way possible. And believe me when I say that you should watch on an empty stomach—it’s that gross.

Porter is an almost sympathetic character. We know he is the sole survivor of a vacation gone wrong. His son died in his arms because of the flesh-eating disease and Porter is now trapped, a specimen to be studied and used for the good of humanity. I say almost because Porter is actually quite frightening. He intentionally infects those around him in the hope of escaping and going home, not caring that he will spread the disease to everyone he comes into contact with. There are quick scenes intercut with the closing credits that I thought would have been better in the body of the film. I find the idea of a deadly pandemic with no known cure absolutely terrifying and I felt the movie should have played that up.

Overall, I found CABIN FEVER: PATIENT ZERO rather boring. It was almost halfway into the film before the predictable ravaging of the unsuspecting tourists began. It is a gore-fest, to be sure, as there were a few times I had to look away for fear of losing my dinner. There is one scene in particular where two infected females fight on the beach over control of a dingy. It is another cheap cliché, although the mud/Jell-O/whatever has been replaced with blood, shredding skin, and snapping body parts, which makes it almost funny, though repulsive, to watch.

The gore is top notch—I imagine the bulk of this B-movie’s budget was spent of Special FX—and as I’ve already said, the possibility of a disease such as this getting out into the world scares the shit out of me. In the end, I found it fell a bit short of its potential to be a frightening and intelligent story. Full of clichés and predictable scenarios, I give CABIN FEVER: PATIENT ZERO an average rating. It’s not terrible, but one viewing was enough.

(CABIN FEVER: PATIENT ZERO gets a limited theatrical run at the end of the month.)