Few occupations are more exploitation-friendly than cheerleaders.  They’re young, they’re attractive, they have lots of entertaining drama, and they take plenty of group showers – it’s no wonder that genre filmmakers love using ‘em.  They’ve been Swinging, they’ve been Naughty, they’ve Done Dallas, they’ve been Massacred – they’ve even pawns of Satan.  (Though, in the ‘70s, pretty much anyone interesting was.)  Centering a story around cheerleaders is a great way to engage in the lurid exploitation the audience comes for while still having a fun plot with plenty of character drama that can, in the proper hands, be turned into something that draws eyeballs in for the tease and keeps them there for the characters.  (Hell, BUFFY THE VAMPIRE SLAYER was grounded on this idea – the fact that Buffy’s cheerleaderhood vanished quickly in the television series just meant that Joss Whedon was already moving beyond the eye-catching concept for the film.)

Lucky (MAY, RED) McKee and Chris (I KNOW WHO KILLED ME) Sivertson are no strangers to the allure of cheerleaders – their 2001, shot-on-video ALL CHEERLEADERS DIE served as the directorial debut for the pair, and while the tale of a group of cheerleaders who are accidentally killed during an outing with their football-playing boyfriends and return from the grave for revenge is fairly hard to come by these days, it’s still an impressive first film that defies its SOV origins.  Sure, it’s simplistic and some of the casting is unconvincing (the lead actor doesn’t read “high school football player” so much as “skinny guy who stands outside a 7-11 and offers to buy booze for underage kids”), but you can see inklings of the talents that would evolve in McKee and Sivertson’s later work.

(Side note:  I LIKE the Lindsay Lohan-starring I KNOW WHO KILLED ME.  I think it’s ridiculous and goofy and entertaining, and it’s completely unlike the thrillers made at the time, much more akin to a mind-messing ‘70s giallo film.  If you re-dubbed this movie to utilize non-sync sound, everyone would be raving about how great an homage it is.  Call me crazy, but watch it again before you do.)

With the budgetary shortcomings and freshman ambitions, it’s not all that surprising that McKee and Sivertson would choose to revisit the idea now that they’ve gotten the practice and budget to make a more fully-realized film.  Impressively, the pair have chosen to completely overhaul the ideas behind the film, creating a well-written, clever and entertaining new work that plays like a combination of BRING IT ON, THE CRAFT and HELLO MARY LOU: PROM NIGHT II, straddling the line between ridiculous and realistic thanks to solid performances and a respect for the characters, no matter how absurd the situations they’re involved with become.

Caitlin Stasey stars as Maddy, a surly young woman with a bone to pick with the cheerleading squad after her friend Alexis dies during a botched practice, and head cheerleader Tracy (Brooke Butler) begins dating Alexis’s football-playing boyfriend Terry (Tom Williamson) almost immediately.  Intent on getting revenge against cheerleading culture as a whole and Tracy in particular, Maddy joins the squad and soon attempts to pit the new couple against each other — by setting up Terry as a cheat and locking lips with Tracy. 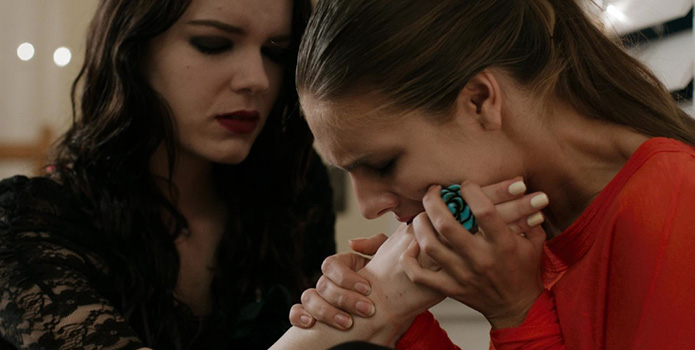 Maddy’s involvement with Tracy turns into more than a ruse, however, when feelings start to get involved at a group outing with the football team.  There’s a confrontation, and Maddy, Tracy, and a pair of sisters (one of whom is the team’s mascot) drives off a cliff, killing the quartet.

Maddy’s ex Leena has other plans and brings the gang back to life thanks to some power crystals and a Pagan ritual that she’s used to casting due to her frequently-dying cat.  The only problem is that a couple of the bodies get switched, the newly-revived cheerleaders lack a pulse and, most importantly, they now require feeding off of humans just to keep from having seizures.  Fortunately, there’s vengeance to be had and sexual couplings to turn into bloodbaths.

McKee’s work has often been known for its strong, complex female characters, and ALL CHEERLEADERS DIE is no exception –Maddy, Tracy and Leena are certainly more than archetypes and come across as full-formed human beings whose motivations are often complicated by their own machinations.  The male characters are, for the most part, grist for the slaughter mill or crude villains used to forward the plot – though in this CHEERLEADERS, they at least read like actual high school football players. With this in mind, the film could have easily been a straightforward revenge tale that celebrates “girl power” and doesn’t do much more, but to MeKee and Sivertson’s credit, they don’t just throw a bunch of cheerleading zombies onto the screen and hope for the best.  Instead, the interplay between the revived girls (and the living Leena) is as entertaining to watch as the carnage they create, resulting in a film that satirizes aspects of teenage culture but still embraces the reality of them by addressing situations that would normally be more at place in a made-for-TV drama.  It’s a tricky line to tread, but for the most part, ALL CHEERLEADERS DIE does it fairly well.

Other than the one-dimensional male characters, the only real issues with ALL CHEERLEADERS DIE is the occasional confusing editing choices used during the party sequence that make for a slightly perplexing timeline and an ending that doesn’t feel quite as climactic as it should have been.  These minor flaws aside, CHEERLEADERS is an entertaining, darkly comic revenge flick that manages to be just about as sharp and clever as one could hope without tipping into the realm of being a flat-out satire, even if you may occasionally wish the lead girls’ dialogue was just a bit wittier.

Those looking for a little bit more subversion into the realm of the objectification of women (one of the original’s more clever conceits is that despite all of the cheerleaders, the only nudity on display is our male lead’s scrawny ass) should probably look elsewhere, as it’s more of a fun examination of cultural tropes rather than a subversive take on gender constructs.  For the discriminating genre fan, however, McKee and Siverston’s update of their 2001 film should be more than suitable for an evening’s entertainment, and that’s exactly the audience who would appreciate something called ALL CHEERLEADERS DIE anyway.

ALL CHEERLEADERS DIE will be available on streaming Thursday and playing some theatrical engagements on June 13.