Going into the Marvel’s latest, DOCTOR STRANGE I feared it would suffer mediocrity as most origin stories do. As Doctor Strange rises above and overcomes his ego, the film rises above and overcomes the trappings of superhero stories. It’s a standalone movie, yet connects to the rest of the Marvel Cinematic Universe in an unexpected way. Brian Wilson once said to, “Hang On To Your Ego”. I never say this but, just this once LET GO of your ego and enjoy the film as Doctor Stephen Strange let’s go of his.

No-it-alls, narcissists and ego-maniacs in general seem to attract little else than disdain from most people. It’s difficult to feel anything except contempt when someone with a huge ego makes everything about themselves. The crushing blow of being looked down upon by others no doubt closes many social doors and ruins relationships but the problem exists within the narcissist and not those surrounding them. Some may have enough self-awareness to hold back at least enough to prevent their peers from being affected. Others, not so much. World renown neurosurgeon Doctor Stephen Strange is a man so self-obsessed that when he loses his ability to perform surgery, it nearly destroys him as a person. 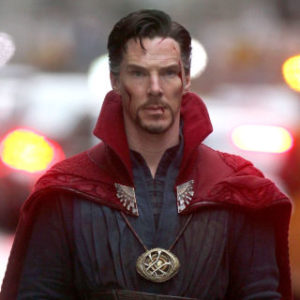 Although he is seemingly happy, his arrogance leaves him in a strained relationship with his fellow surgeon, Christine Palmer. In another life she would be his loving wife. Here, she has to resort to being just another surgeon to him and his assistant by default. During an attempt to guide a fellow surgeon while driving, Strange is involved in a collision, rendering his hands useless of all but basic abilities. Doctor Palmer loyally stays by his side throughout his various attempts at regaining his skills, as futile as they prove to be. Anyone else in this position would likely transition their work to medical research or even as a mentor to another. This isn’t enough for Stephen. Christine leaves him as he wallows in frustrated self-pity.

An unusual circumstance involving a paraplegic that now plays basketball leads him halfway around the world in search of a more mystical answer. Strange arrives in Kamar-Taj and studies under the tutelage of The Ancient One, played by an androgynous Tilda Swinton. There he learns the secrets of mirror realities, astral projection and even the ability to bend time. Being that Strange has a photographic memory, he is able to learn at a brisk rate. He consumes knowledge like a black hole consumes light, even and especially when it is forbidden. When an old pupil returns for vengeance, he is able to hold his own. When this pupil unleashes an even greater force on the world, Strange must decide between his own arrogance and well, the rest of humanity. 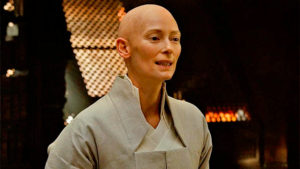 Breathtaking is a very overused word yet that’s what the visuals are, even if they appear a bit derivative of Christopher Nolan’s INCEPTION. Reality literally seems to fold out and around itself in a trippy way. Imagine THE MATRIX if that film had a character with the potential to actually grow. Metaphysical weapons seem to have the same effect to the body as actual physical weapons. Now a sorcerer Doctor Strange, must materialize in his own hospital, talking Doctor Palmer through surgical procedures while battling unseen enemies in the astral plane simultaneously. The film has very little flaws. Ritual magick, martial arts and fantasy blend together as if they were all one in the same. Pop culture jokes, as humorous as they are, litter the dialogue seemingly at their own whim. As mentioned above, the special effects seem a bit derivative in a better than Matrix, less than Inception kind of way.

If I had suffered a brain injury, Strange would be the doctor I would want around. He breaks the rules to save lives. He jumps from case to case, making decisions that no other surgeon would even begin to think of. He brings back a man believed to be brain dead by extracting an unremovable bullet using simple surgical hand-tools against the objections of his colleagues.