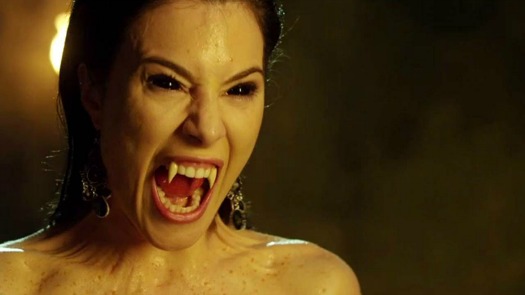 When Craig Gillespie’s FRIGHT NIGHT remake was released in 2011, it was met with the usual batch of disgruntled fandom and little in the way of box office residuals. It’s a shame, as the film is actually a fairly solid updating of Tom Holland’s 1985 horror film about a high school student who discovers a vampire living next door, embracing some unique twists and featuring entertaining performances by David Tennant and Colin Farrell. While not as heartfelt as the original film, (which had the benefit of featuring Roddy McDowall in an Oscar-worthy performance) the remake is certainly a cut above most needless horror retreads, even besting the earlier feature in some areas. The mother of our hero, in particular, is raised from mildly melancholy joke to active participant, and given an actual role beyond “ancillary character” thanks to the performance of Toni Collette.

While the theatrical release of the film was a bit of a bust, making a good $6 million less than the original did in its release (in 1985 dollars), the name is apparently still enough of a draw for a follow-up to be greenlit in the form of FRIGHT NIGHT 2: NEW BLOOD. NEW BLOOD, confusingly, isn’t a sequel to the FRIGHT NIGHT remake but rather another straightforward remake of FRIGHT NIGHT with the characters of the same names played by different actors going through the same general plot points as the previous two first FRIGHT NIGHT films.

Confused yet? It’s the way direct-to-video “sequels” work now when they can’t get anyone from the original cast involved. 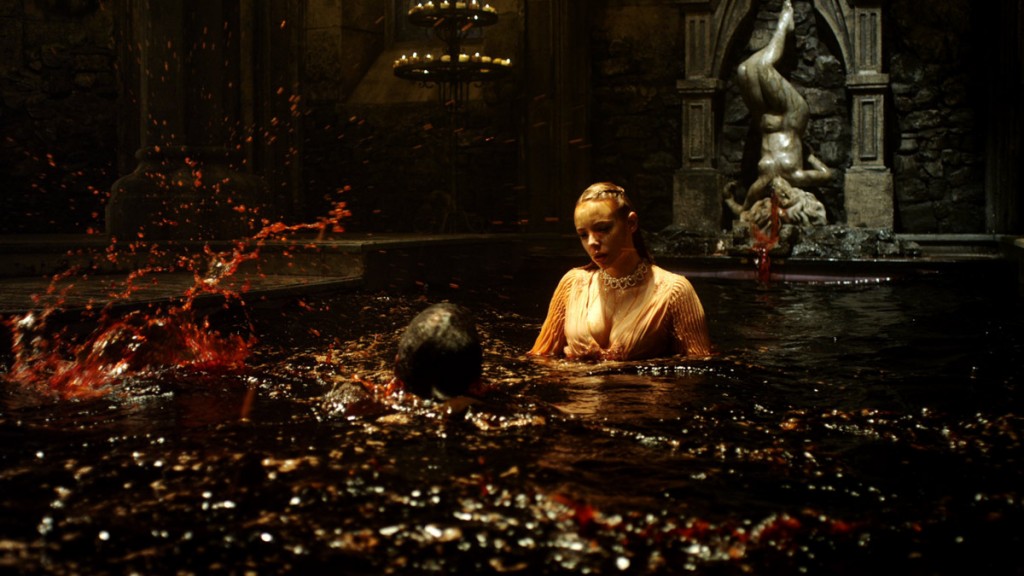 The trinity of leading characters – likeable Charley Brewster, his girlfriend Amy and best pal “Evil” Ed – are all on board, though this time the action is transported to Romania, where the trio is part of a high school study abroad program where their new art history teacher, Gerri Dandridge (played by “Dexter”’s psychotic temporary girlfriend Lila Jaime Murray) hopes to fill their brains with knowledge. She also plans to drain their bodies of blood, as she is, of course, a vampire, which Charley discovers when he spies her sinking her fangs into a young woman from his hotel window across the street.

It’s this moment where NEW BLOOD hits its first foul note, beyond the inexplicable reimagining of “Evil” Ed from the awkward social reject played by Stephen Geoffreys or Christopher Mintz-Plasse to an obnoxiously horny wanna-be frat boy. In the other tellings of FRIGHT NIGHT’s story, Charley stumbles upon his discovery of the bloodsucker next door, but in NEW BLOOD, Dandridge seems to be egging him on as soon as she spots him watching her making out with a woman, turning her murder of the girl into a show meant for his eyes and taking the initiative in forwarding the plot. But exposing herself to Charley doesn’t make any sense – one would think a vampire that, as we later learn, has been around for hundreds of years wouldn’t want to risk being spotted by some random teenager, and it doesn’t make sense for her to pursue him specifically when it quickly becomes clear that she’s basically just out for any blood she can get. 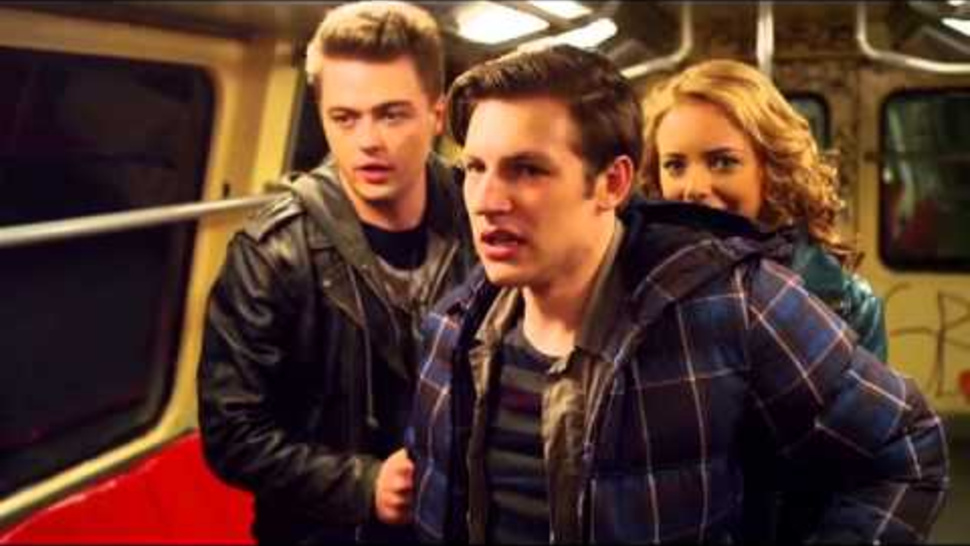 Needless to say, nobody believes him, though Dandridge begins vampirically messing with his head during class. After some investigation, we find out that she is, in fact, the Countess Bathory, who has been bathing in a ridiculously watery blood mixture (seriously, you wonder if anyone involved with the film had ever cut their finger) for centuries. Charley does manage to convince Evil Ed somehow, and Ed talks him into going to see Peter Vincent, the host of a reality show specializing in hauntings, who is in town investigating the legend.

Amy gets involved (because she, coincidentally, happens to be walking down the street at the same time as the rest of the characters) and the rest of the film follows much of the same structure of the first two movies called FRIGHT NIGHT, though it transposes scenes to new locations. Vincent, for example, is recruited in a strip club, and Evil Ed’s attack on him takes place in a bathroom. The prolonged climax is well-staged and uses the Romanian locales well, but it’s such a barrage of coincidence, folklore and arcane rules that you’d swear it was dreamed up in a “True Blood” writer’s room. 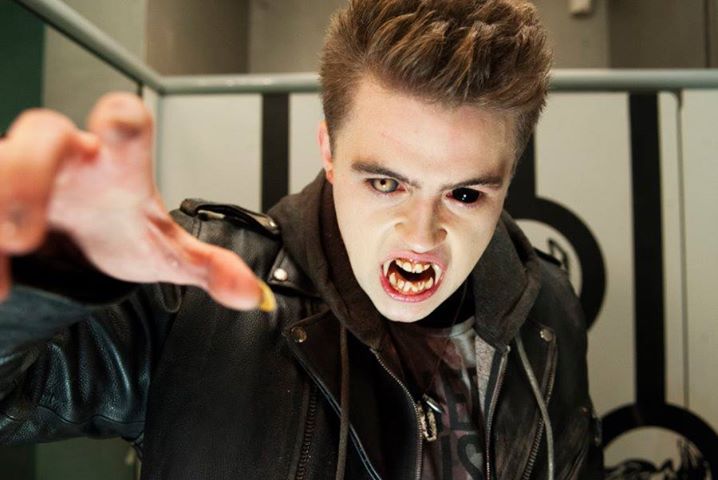 Conceptually, there’s nothing wrong with retelling the FRIGHT NIGHT story in a different way, especially since the plot itself is essentially a just a fanged reworking of REAR WINDOW. Unfortunately, it feels like NEW BLOOD director Eduardo Rodriguez and writer Matt Venne had a great love for the concept of the original without having any idea exactly why it worked so well. (Not too surprisingly, Venne also scripted the similar rehash-disguised-as-a-sequel MIRRORS 2 and the better-than-you’d-expect WHITE NOISE: THE LIGHT) By moving the locale to a place far from home, the movie is no longer about the invasion of a calm home by an unstoppable evil, but rather just a bunch of weird stuff that happens in a foreign country. With the updated Evil Ed, NEW BLOOD often feels less like a FRIGHT NIGHT film and more like a particularly chaste HOSTEL sequel, and the fact that the Bathory sequence from HOSTEL PART II is one of that film’s highlights doesn’t help.

Murray brings some slither to the part of Dandridge, but the screenplay gives her little to do beyond look like a sexy predator. Sean Power’s Peter Vincent manages a few entertaining sequences, particularly a memorable subway exit, but he’s not written with the level of showmanship that McDowall or Tennant could bring to their performances. He’s a mildly sleazy character with the expected redemptive streak, but a FRIGHT NIGHT film demands a lot more.

The biggest issue, however, is the relationship between Charley and Amy. In the other films (and even FRIGHT NIGHT PART 2), the central relationship between Charley and his girlfriend is pleasant and well-established, enough that you understand the impact when the vampire comes between them. In NEW BLOOD, the pair start out the film having had an argument, and spend much of the movie broken up, occasionally sharing scenes together for the sake of the plot. Rodriguez insistence on needless stylization of certain sequences doesn’t help, especially during a quiet character scene between the two of them in which the camera swerves around the pair repeatedly. It’s one of the few genuine moments between the two, and it’s shot like it’s Brad Davis getting arrested in MIDNIGHT EXPRESS.

NEW BLOOD isn’t a terrible movie by any means – the locations are nice, the performances aren’t bad and there are some clever moments, even if some, like the backstory of Bathory being rendered as an odd motion comic like a low-rent version of O-Ren Ishii’s origin in KILL BILL, are more potential than execution. However, it lacks the heart and fun that made the other FRIGHT NIGHT films memorable. It may be judged unfairly based on expectations of what the FRIGHT NIGHT franchise should entail, but if they didn’t want the comparison, they probably shouldn’t have called the film FRIGHT NIGHT 2.