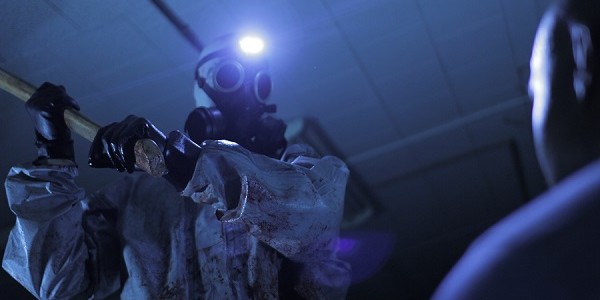 The use of a reality show gone horribly wrong has become a standby in horror films over the past decade.  Most notably used by big-budget flicks like HALLOWEEN: RESURRECTION, the set-up can be used well by embracing both the horror aspects and the darkly satirical nature of the concept (this list is a fairly decent recounting of examples) but, more often than not,  it’s used by low-budget filmmakers as a quick excuse to get a bunch of diverse people together in a small space because they couldn’t come up with any other reason, and any intent on addressing the concepts brought up, providing characters you can root for and well-directed fright sequences quickly falls by the wayside in a pool of cheap CGI blood and tedious screenwriting. 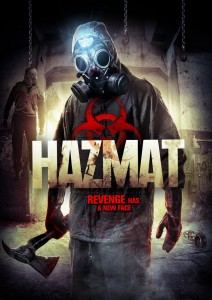 For the first half-hour, Lou Simon’s HAZMAT gets perilously close to going down the wrong path.  The reality show being filmed is “Scary Antics,” a “Scare Tactics”-like show in which people are set up to be immersed in scary situations by their would-be friends.  The would-be victim in this case is Jacob, a rather high-strung but personable young man played by Norbert Velez whom his friends (in actuality, a best friend, his best friend’s girlfriend and her best friend on whom Jacob has a crush) have decided to freak out via reality show.

The place for this is an abandoned chemical planet-turned-warehouse, where Jacob once worked with his father.  It’s a bit confusing as to why they think all of this is a good idea – in interviews, best pal Adam’s girlfriend Carla (Daniela Larez) thinks he’s “creepy” because he doesn’t talk much and hanger-on Melanie (Gema Calero) thinks he’s a bit gloomy, but he honestly seems like a decent enough guy.  Adam (Reggie Peters) recoils when Jacob tells him a spooky story about the plant that his dad told him, but honestly, it just seems more like Jacob needs to have less lame friends.  There certainly isn’t enough a reason given to justify one of his pals to say, “Someone had to shake this guy up before he loses touch with reality.”

While the “cast” of the show begins treading into the labyrinthine warehouse, shot to nice effect by cinematographer Anthony Dones, the behind the scenes crew of “Scary Antics” preps in an office and squabbles amongst themselves.  Lead producer David (Todd Bruno) is either worried about convincing the network to keep the show on the air or talking about how great the ratings are, when not dealing with his ex-wife (and co-producer) Brenda (Aniela McGuinness) wanting out of the whole thing.  Tech guy Gary (Gordon Diaz) has issues with his girlfriend.  Steven (Tom Stedham) announces that he’s leaving for a promotion.

Outside of some nicely-lit corridors and a few witty moments about the nature of reality shows (one employee forgets to put on his branded shirt, one friend mentions that she’s just doing this to show off her acting abilities), the first half of HAZMAT doesn’t offer much you haven’t seen before, and the characters, while not so negative to make you want them dead at their earliest convenience, don’t really engage either.  It feels like passable actors going through a set-up, waiting for the actual movie to start.

Thankfully, things shift into gear when things go horribly wrong.  Jacob, now dressed in a HazMat suit he found and wielding a fire axe due to the sounds of his friends off somewhere screaming, is startled by one of the show’s scare artists in similar garb and plants said fire axe into his would-be frightener’s chest.  Panic ensues, of course, and the cast and crew find themselves trapped in the warehouse as the now-psychotic Jacob begins picking them off. 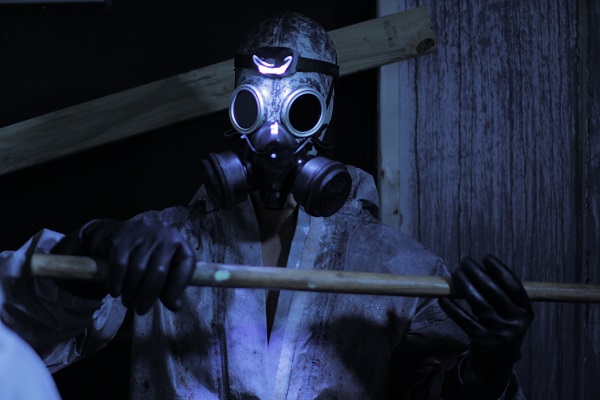 Much of the time is spent in the sealed-off office room where the crew takes refuge, allowing for some memorably tense moments that involve a fair share of character development.  The brightly-lit claustrophobic setting makes for a stark contrast with the darkly lit rambling nature of the rest of the warehouse, visible on a screen via cameras in the building whose numbers slowly decrease as Jacob destroys them as he comes across them.

While the set up for the bloodthirty rampage doesn’t make a whole lot of sense (I’d have rather the film spent more of its first half on exploring Jacob and his background rather than just having a bunch of bickering), once the actual horror movie kicks in, the film does a fine job of having characters react in a fairly realistic manner, and nobody does anything eye-rollingly stupid.  There’s a couple of impressively shocking demises, a reliance on old-school effects and, while there’s certainly plenty of bloodshed, the gore never seems to be the point.  Simon’s attention to action sequences pays off, and the second half of HAZMAT manages to overcome the first half’s shortcomings.

There’s a fair share of filler to get through and if you start thinking too much about what’s going on, you may get a headache (We also keep hearing about how there’s construction nearby that causes sound issues, but we never hear it), but HAZMAT should satisfy a genre fan for a time killer of an evening.  At a quick 80 minutes, HAZMAT is well-paced enough that the more negligible aspects of it can be overlooked and those with a love for some old-school slasher antics should give it a try.

(It’s not, as you may have guessed from the packaging, a contagion thriller, but how else can you market a movie about a killer in a radiation suit?)