Taika Waititi (WHAT WE DO IN SHADOWS, EAGLE VS. SHARK) is quickly becoming one of my favorite filmmakers. His films have a unique, dry humor that are very intelligently written and creatively directed, and HUNT FOR THE WILDERPEOPLE may be his best film yet. He implements creative camera work, jump cuts, props, and the score to aid in his storytelling that gives even the films darker moments some levity, making it enjoyable to watch and keep the viewer’s attention.

Set in obscure New Zealand bush, we’re introduced to young troublemaker Ricky Baker (Julian Dennison), a self-proclaimed “Menace II Society” (an obvious ode to the 1993 film given Ricky’s love for American hip hop and gangster culture) who has bounced around the New Zealand child welfare system from foster home to foster home before landing in the home of Bella (Rima Te Wiata) and Hec (Sam Neill). As Ricky acclimates himself to his new home, tragedy strikes, and adventure begins. 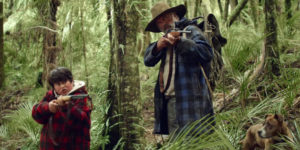 The film genuinely tugs at all of your emotions, but it is an adventure comedy that at it’s core is about moving on and evolving as a person, no matter what the age and circumstance. It is about the relationship of a troubled young boy and an old coot set in his ways, and what they do for each other’s spirit and growth. It’s the story of progression, living outside of your comfort zone, and abandoning your routine to experience the joy of new adventures. The two are forced into each other’s company, and what is initial distaste for one another, matures into an unlikely friendship. The film shows us no matter how people may appear on the surface, that a friendship can blossom, and people have more in common than they realize. 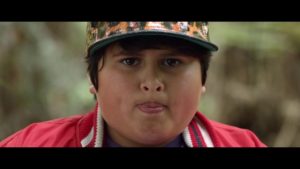 Waititi starts to tell you a story of a rebellious youngster that is “rescued” by an aging couple. But it is really about a vibrant boy filled with hopes and dreams that saves an old man from himself and his ways, and teaches him it’s never too late to learn, love, have fun, or gain a new family. Excuse my sappiness, but I thoroughly enjoyed this film. It’s a good story by a great filmmaker that’s entertaining throughout.

HUNT FOR THE WILDERPEOPLE is available now on DVD/Blu-Ray and Digital Download.