It’s such a brilliant premise that it’s a surprise that no horror film thought of it first: what if that ghostbuster/psychic/exorcist/mystic shaman supernatural fighter you recruit to cleanse your house and soul over evil spirits turns out to be even worse than the demons you’re fighting? That’s a great idea for a sinisterly unnerving twist on tired haunted house tropes, so it’s surprising that it’s reared it’s head not in a horror film proper but in a slice of loopily lo-fi mumblecore awkwardness like Carson D. Mell’s ANOTHER EVIL.

Dan (Steve Zissis) is a successful artist whose paintings of black circles have allowed him to build his family a nice little vacation home in the mountains. But things are not as idyllic as expected as it becomes quickly apparent that the house is haunted: first his paintbrushes move on their own, and then he sees a gnarly old man with a half torn face crawling up his stairs,THE GRUDGE style.

Dan’s wife (Jennifer Irwin) enlists the aid of a boorish psychic in sweatpants (Dan Bakkedahl), but when his advice — to simply live with the seemingly un-malevolent spirits — proves to be unsatisfactory, t Dan seeks out the assistance of self-proclaimed “ghost assassin” Os (Mark Proksch), who’s aggressive, pro-active exorcism stance is, at first, more fitting for the freaked out artist.

Os’s unconventional methods and friendly, eager demeanor at first tickle the bemused Dan, and as the two huddle alone in the mountain cabin for several days, a tentative friendship begins to bloom out of the initially professional one. As the days progress, however, Os’s methods become increasingly erratic and off-putting, and his apparent alcoholism and desperate neediness begin to irritate and worry Dan, who becomes increasingly eager to live, literally, with his ghosts and rid himself of his pesky guest.

ANOTHER EVIL is essentially Joe Swanberg and Larry David teaming up to make Blumhouse’s CHUCK AND BUCK — an acidic and dryly funny depiction of desperate loneliness breathing in the loose-fitting skin of a haunted house movie. And it mostly works on that level. The movie is often deftly amusing, and both Zissis and Proksch do great character work, bringing layers to characters to characters that could come across as caricatures of differing stripes of pathetic masculinity. Proksch makes Os at times endearing and sympathetic while also, crucially, underlining the darkness that lurks in the ghost hunters soul — both the deep well of sadness and loneliness that plague the man, but the currents of menacing craziness that might really dictate what he does and believes. Zissis has a less showy role, but he grounds the film in Dan’s affability and giving nature; he’s believable as an everyman who is both amused by, and then suspicious of, Os’s “good-matured” intensity. The men have a palpable dynamic and chemistry with each other. 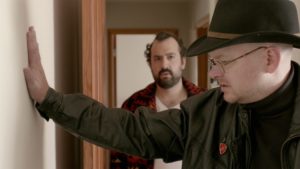 Where the film falters in its gelling of the two tones together. Though the film is largely a comedy, an understated and acerbic one at that, Mell does intend for us to take the horror elements at least semi-seriously. The film is amusingly grounded in a world wear hauntings are taken matter-of-factly — like dealing with a particularly onerous pest problem — and while it’s not scary, per se, at least the director makes an honest attempt at not treating the spirits as joke — one has a horrifically mangled face, and the scenes where they show up are convincingly staged enough to at least illustrate Dan’s terror.

But they are still a clothesline on which to hang Mell’s desire to make an awkward relationship comedy — which would be fine had the director did not veer into a climax that is entirely at odds with the affable nature of the rest of the film. It’s in the last act that the director moves squarely back into “horror” territory, but the dark places where the film goes — though, admittedly, true to the nature of its characters — feel out of place to what came before. It’s a tightrope act juggling such disparate tones, and one that Mell doesn’t quite pull off — the majority of the film being too genial to justify the last act turn, the last act turn being to grim to work with the rest of the film. That the movie also feels a mite too long, that its slightness wears thin after too long, hardly helps matters any.

ANOTHER EVIL is an admirably low-key attempt to rummage through a little explored part of the horror universe and to use it as an entry into exploring the inherent loneliness in the forming of bonds of friendship. It’s part of a trend of indie films smudging the borders on what genre film actually is, and is admirable for that. But the tonal discrepancies cut it off at the knees and the film never ultimately justifies why it couldn’t either delve deeper into genre material or just be the observant mumblecore comedy it wants to be.