Keanu Reeves can be painful to watch at times. His acting capabilities are subpar. Or in other words, he’s bad…really bad. I still love him though. However, he is incredibly skilled with firearms and he proved in the inaugural JOHN WICK film that he could kick some ass on screen. He stands to have a Liam Neeson-like career resurgence as an action star. I must say, I am mesmerized by how he handles weapons, as he clearly knows what he is doing (you may have seen him firing guns with a California tactical company in a viral video or two) and he does it in a way that sets him apart from other action stars. He did so in the original JOHN WICK, and he expands on his repertoire in JOHN WICK, CHAPTER 2, with a number of slick moves that really catch your eye.

If you saw the first film, you can expect more of the same in part 2. It starts right where the first film ends. If you didn’t see the first, go watch it now, because it’s one of the best action movies of the past decade and I’m about to spoil it. John successfully avenges the death of his pup, but he never located his other love, his car! CHAPTER 2 opens with him doing just that, as he slips his way into a New York warehouse where is car is currently housed. You know what happens next. It’s a nice transition from the end of the first into the second, as CHAPTER 2 takes place very shortly after CHAPTER 1 (a week or two, or perhaps a month later, as he has had time to go to his local rescue shelter and get a new pooch, yet he hasn’t had time to give him a name).

We’re then introduced to the villain, Santino D’Antonio (Riccardo Scamarcio), who has a “marker” for John (a blood oath showing that John owes him big time from a previous favor, an “impossible task” that he helped John with so he could retire in the first place). John refuses to repay his favor, and all hell breaks loose. Lots of people are shot in the head, stabbed with pencils, and shot in the head. And it’s fucking awesome. 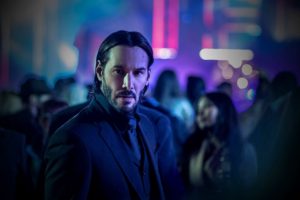 Sequels often follow the same pattern as the film they’re following up, and it can be clear that the audience is just being sold a remake of the first. So it can be especially tough for an action film to do anything that we didn’t see in the first one. Going into this, I was terrified the new pet would be killed and we’d be shown the same movie again. Sure, I’d be happy with the bloodlust, but I wanted, and got, an entirely new film (using “new” loosely, as this is still a body count/vengeance film). Writer Derek Kolstad and director Chad Stahelski expand on this universe and show us more of the underworld that John is a part of. It really is the second chapter and by no means a lazy rehash of the first – evidenced by only a brief appearance, sadly, by John Leguizamo.

There are some really neat action and fight scenes that were rather creative, including some cool car action opening the film and a couple with, rapper turned actor, Common that were really fun. We’re also treated to a quality house of mirrors sequence that reminded this reviewer of Kurt Russell’s (and Sylvester Stallone) TANGO AND CASH (well, they both had mirror’s, I just wanted an excuse to look up Tango and Cash clips on youtube). All that really matters here is that once we get into the second act, it’s Murder Fest 2017, the main event is John Wick, and it’s worth every penny. 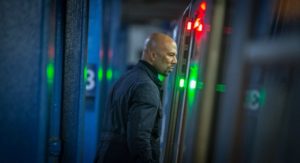 Keanu is truly fun to watch. The director rarely cuts away from him as he’s firing, reloading, and handling his weapons, showing you that he is incredibly well trained and has a unique flash to a skill that somehow makes him seem less robotic than normal. The long shot scenes where he’s killing a handful of goons, similar to the first film, are tightly shot and executed tremendously. Your instinct may be to turn away as he fires round after round into human heads (not my instinct), but you are really drawn in by him and the camera. Plus, the hand-to-hand combat scenes are also fantastic, as he looks like he’s been through extensive knife and pencil training as well.

I absolutely loved the first film – the bloodshed was great, but the basic plot of “Man seeks revenge for the murder of his puppy and theft of his Mustang” was pure gold. I can relate to that (don’t you even think about touching my dog!), and action-revenge films are easily one of my favorite genres. CHAPTER 2, thankfully, lacks the excellent puppy-revenge plot from the first, but it gets more creative and fun with its action and killing. There are also a number of religious undertones that had me believing that Winston (Ian McShane reprises his role) is God and John is the Devil, but I’m not getting into that as this movie is enough fun without over-thinking it. This was a rare action sequel that was equal to, if not better than, it’s predecessor, and I am looking forward to what this team comes up with for the third. Turn off your brain, forget about acting, grab a bucket of popcorn, and enjoy this for what it is, a bloody good time at the movies.