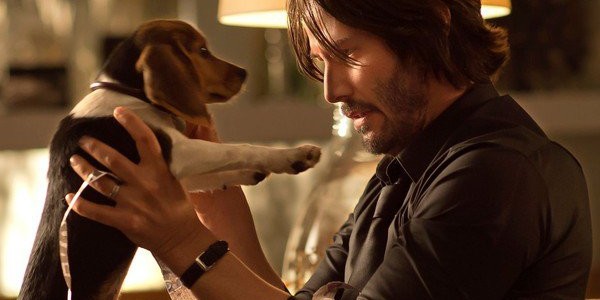 Welcome to the newest addition to Daily Grindhouse’s growing collection of columns: A FISTFUL OF FISTS. In which staff writer Patrick Smith will highlight a different sweaty testosterone driven bone cruncher of an action movie every week. For the month of February he’ll be going through a few of his recent favorites but as this column goes on it will include everything from Van Damme’s flying kicks, Hong Kong wire fighting, tough as nails yakuza cinema, Blaxploitation, hard knuckled femme fatales, Schwarzenegger’s “choppas” and the international treasure that is Dolph Lundgren. In this inaugural edition we start with a look back at what might be the sounding gun of a new renaissance int action cinema.

At least I didn’t, and I fully admit that I missed it in theaters. At the time I think I was more than a little down on action movies as a whole. It had been a few years since THE RAID hit like a goddamn meteor which also brought to light how lacking a lot of mainstream, American action  pictures currently were. There were bright spots in the DTV arena as well as a handful of blockbusters that managed to have they’re own particular brand of swerve…but something was definitely missing for me. So when word started spreading about a movie about a hitman seeking vengeance after some thugs kill his dog and also featured some of the most jaw dropping choreography displayed on screen, my interest was peaked. However, I remained skeptical. By the time it hit home video, word of mouth made it out to be the second coming of headshot-jesus.

Turns out they were underselling it. 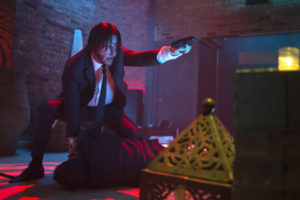 Since seeing it, I’ve spent quite sometime wondering how JOHN WICK could have flown so throughly under the radar. It probably comes down to the fact that for the last decade, American action movies have tended to operate around known quantities. Whether thats actors, sequels, or adaptations of comic book characters and YA novels, there’s always this idea we know what we’re gonna get. As such, a movie being produced in the pre-Keannaissance featuring Reeves and a pair of directors that had a solid background in stunts but nothing to really know what they could do in terms of directing was a gamble. The directors, Chad Stahelski and David Leitch, prolific stunt performers and founders of the premiere action design company 87Eleven which have had a hand in almost every modern American blockbuster. Couple that with Reeves who despite a couple of rough years has maintained himself as one of the most iconoclastic leading men working, and whose work on films such as POINT BREAK, SPEED, and THE MATRIX make him as much of an action icon as people like Van Damme or Stallone so the ingredients for greatness were right there for anyone willing to look.

Still, despite that pedigree I don’t think anybody was expecting something like this. Writer Derek Solstad takes a lot of cues from other hitman movies such as LE SAMURAI but really lays in background details that give it a near epic scope on par with something you might associate with Leone or even Kurosawa. Giving JOHN WICK a backdrop of secret societies of assassins that use rare gold coins as currency and hang out in neon soaked speak easies definitely gives the flick its own kind of flavor. 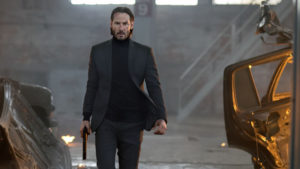 Which definitely explains why Reeves would be drawn to it and had the idea to bring in Stahelski and Leitch to direct. The mythology thats parsed out over its running time is highly effective, as when we first meet JOHN WICK he’s about as close to a regular joe as we can get from a protagonist. Hell, if it weren’t for the fact that Reeves is such a naturally empathetic actor using the one two punch of his wife dying and then having some young tough kill his dog would almost feel like an emotionally manipulative narrative trick to get us on his side. But as the first half hour unfolds we realize that what the creative team is doing is building Wick up for a the unrelenting hour that follows. Exposition is tricky, especially when explaining what a badass the main character is without really showing it. However, when the films heavy, Michael Nyqvist delivers it its a—portraying a man that has truly seen some shit—and finding out that his son has inadvertently resurrected an assassin that is un-ironically called the boogeyman, we’re left to wonder if he can live up to his hype.

That Stahelski and Leitch could create a great action movie never should have been in question; what did pique interest was how cinematically it was constructed. Having been the go-to stunt team for the Wachowskis, the duo picked up a few tricks when it comes to world building. Working with cinematographer Jonathan Sela they also give JOHN WICK a distinctive visual pop that definitely goes a long way to setting itself apart from other films that skew towards a “house style”. When paired that with the genius move of stacking every role in the movie (sometimes only for one or two scenes) with ringers such as Ian McShane, Lance Reddick, Dean Winters, John Leguizamo, Adrianne Palicki, and GODDAMN David Patrick Kelly they add a weight to the world that legitimizes some of the crazier ideas. But all of that is window dressing. What really counts is how the characters, mythology, and look of the film feed into the action and what they do with that is nothing less than a straight up mission statement.

As I said before, it takes a good hour of buildup to get to the first big fight of the film in which a crew of killers are sent to Wick’s home to theoretically take him out before he becomes a threat to Nyqvist’s mob boss. What follows is a close range gun battle that is equal parts tactical and precise while being absolutely brutal. Reeves trained extensively for four months (nearly eight hours a day, five days a week) at the 87Eleven compound located in an industrial block outside of Los Angeles. The actor committed himself fully to a regiment of weapons and martial arts training. Its the kind of commitment that would be impressive for a navy seal let alone a guy who just turned fifty, but its that commitment that really proves how much Reeves believed in the project and how Stahelski and Leitch could wield him. Given that we just spent the previous thirty minutes watching him break down over the death of his wife and getting the crap kicked out of him its almost like we see a completely different person taking on these assassins, and we see just why they would call him the boogieman.

Apparently Reeves coined the term Gun-Fu to describe the fighting style that Wick utilizes. Unlike something more cartoonish like what was used in EQUILIBRIUM, here it focuses on close range grappling based in Judo and Brazilian jiujutsu which is just meant to get Wick close enough to deliver the headshot. Stahelski and Leitch have complete trust in their performers and use closeups sparingly instead going for roving medium shots that keeps as much of the action in the frame as possible with minimal cutting. By the time we get to the films biggest set piece in a nightclub/bathhouse (Russians, am I right). Wick is operating at a level of almost supernatural level of precision taking out dozens of goons (most of which played by a who’s who of LA based stuntmen and MMA fighters) and making him pure nightmare fuel.

If there’s a complaint to be had its that it doesn’t quite follow the rules of escalation as the final fight between Reeves and Nyqvist is solid but also somewhat underwhelming as we just watched Wick lay out over eighty men so a borderline retired mob boss is kind of letdown. But JOHN WICK isn’t so much concerned with an ending as it is about making a statement. And that statement is that for all of the CGI, and tights, and high concepts you can still create emotionally effective and physically exhilarating action with little more than a man with a gun. But when that man is as cool as JOHN WICK I’d say the future of action has nowhere to go but up. 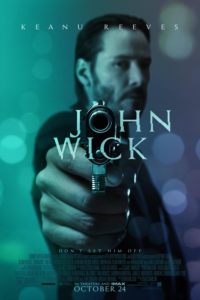