One of the best things about comic books is that they can be anything. They can be incredibly light and funny or dark and violent, characters die and are resurrected, and storylines change and reset. The possibilities are endless, and that’s why they are so fun to read. You fall in love with a character, along with the art, and can see them evolve and change over years, decades even. This variety is something that has been missing from most of the recent comic book films. The Marvel Cinematic Universe movies are light, somewhat humorous (the quips are endless), feature average, uplifting scores, and basically follow the same formula. I’m not knocking them for it; I’m a huge fan of those films and comics. Sony couldn’t figure out Spider-Man and Warner Bros is currently struggling to find their footing with the DCU. I’ll give them credit though, as Batman has had multiple variations and tones on-screen recently.

Which leaves us with Fox and the X-MEN franchise. None of these films have been bad (ORIGINS: WOLVERINE was a bit of a mess), but none have been that great either (I’m a huge fan of DAYS OF FUTURE PAST though). DEADPOOL, which while it falls under the X-MEN umbrella, is a project that we have Ryan Reynolds to thank for. If it weren’t for his persistence to get the movie made, we may never have seen that character on the big screen. As a film that is an origin story, and wasn’t going to impact the X-MEN Universe (for now), the filmmakers were given more freedom to do their own thing and stay true to the comics.

DEADPOOL was a funny, ultra-violent, fun, great film. Which brings us to Logan. It is a dark, emotional, incredibly violent change of pace from ALL superhero films. Thanks to the success of DEADPOOL, director James Mangold (THE WOLVERINE, 3:10 TO YUMA, WALK THE LINE) was given the opportunity to do something different, something true to the comics, that gives a fitting end to the X-MEN careers of Hugh Jackman and Patrick Stewart (who have both said this was their final film with the franchise).

With that freedom, Mangold gives us the most violent, bloodiest superhero film to date, which allows for more creativity and fun with on-screen deaths. With that, LOGAN is also arguably the most human superhero film yet. The film takes place in 2029, and we are presented with an old, scarred, dying Wolverine, along with a ninety-year-old Charles Xavier that has lost considerable control of his powers. Mutants are a thing of the past (none have been born in 25 years, think CHILDREN OF MEN), the X-Men are no more, Logan is a limousine driver earning cash for his retirement, and he, along with Charles and Caliban (Stephen Merchant), is hiding/residing in Mexico until they have enough cash to purchase a boat and retire to the ocean.

Logan (he’s actually now going by his birth name, James Howlett) can’t find much purpose and meaning in his life as he ages and can no longer be a soldier, which is all he’s known. In comes Laura (played by Dafne Keen), a mutant bred in an evil Mexican laboratory using Jimmy Howlett’s DNA, a young female version of Wolverine (project X-23), who is seeking asylum in Canada. Logan is tasked with getting her there while being hunted by Dr. Zander Rice (Richard E. Grant), who’s father worked with Weapon X and was subsequently murdered by Wolverine (Weapon X is responsible for the adamantium in Wolverine’s body, along with Deadpool’s transformation). 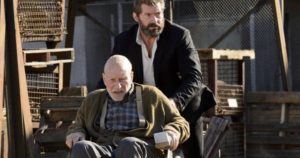 Mutants and violence aside, this was the most realistically emotional superhero film we’ve seen. We’ve watched these characters grow and age over the last 17 years, and now we get to see something rare and unique – these once indestructible heroes at the end of the line, and struggling to survive. Years of fighting the good fight has taken its toll physically and emotionally, as all of the characters are grappling with the things they’ve done and lives they’ve taken. While Wolverine has always been a dark, depressing character (he’s been around a long time, has been near death many times, and has murdered a lot of people). He’s always been that one character that you know would survive and it’s nice to see that illusion fade. 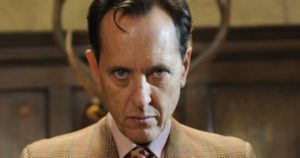 LOGAN’S fresh perspective, combined with its dark tone, incredible violence, and quality storyline makes for an excellent film. It is clearly a very personal, passionate project for Jackman and Stewart, and they give us a very proper sendoff. Wolverine is a violent character. He doesn’t just beat up guys and knock them unconscious like Batman – he has indestructible metal claws that he continuously uses to kill people. LOGAN shows us the violence that comes along with that (we are treated to some enjoyable, bloody on screen deaths) as well as the weight a body and soul may carry after many years of being used as a weapon. It is a movie that does great justice to this character and his history.