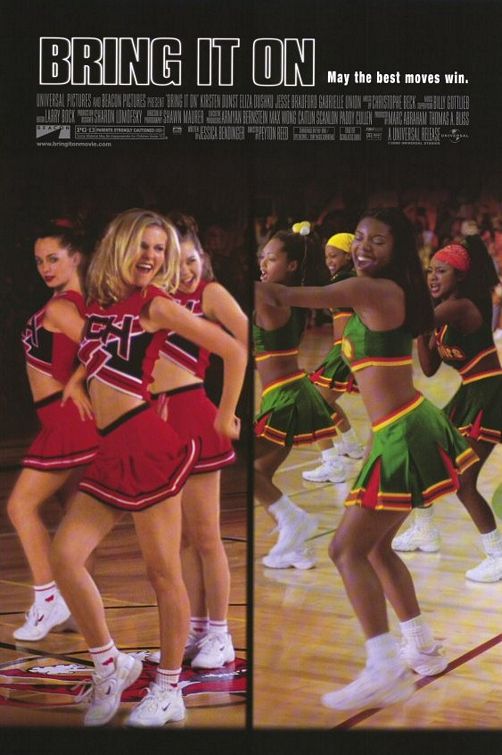 If you want to know something about me, I originally saw BRING IT ON in the theater — with my mom. We both enjoyed it but probably for different reasons.  Something for everybody, I guess; you know how it is.

I don’t spend a lot of time talking about cheerleading movies on this site. It is not what one could call my métier. As a human male with working parts, I certainly do appreciate the image of the all-American cheerleader, but I tend to prefer movies about monsters, werewolves, and fists being thrown, which is why I loved BUFFY THE VAMPIRE SLAYER so much. Chocolate, meet peanut butter.

BRING IT ON arrived towards the end of a still relatively recent era in American movies, the late 1990s, where multiplexes were flooded with films about high school. Some of them were DOA — dated on arrival — but BRING IT ON was one of the best-made of them, so I imagine it still holds up. The director was Peyton Reed, making his first feature after plenty of TV comedy, including the influential Upright Citizens Brigade show. That’s a more anarchic pedigree than most teen movies had at the time. The script by Jessica Bendiger is pretty sharp to begin with — it has great character names, one of my favorite aspects of good comedy scripts.

Kirsten Dunst, two years before SPIDER-MAN, played Torrance Shipman, team captain of the Toros, the team’s cheerleading squad. Dunst is pretty mopey overall in the SPIDER-MAN movies, but I imagine her performance in BRING IT ON is what got her that part: She’s determined, energetic, and smiles in several different ways in this movie. BUFFY‘s Eliza Dushku provides a nice, sarcastic balance as Missy Pantone, a new student who reluctantly becomes an important member of the team, and Jesse Bradford has never been as likable anywhere as he was here, as Missy’s brother and Torrance’s love interest. Then again, I’m endeared to almost anybody in a Clash T-shirt. Gabrielle Union is the best part of the movie by far, as Isis, the leader of a rival cheerleading squad (the Compton Clovers, brilliant name) who accuses the Toros of lifting their routines. It turns out to be true, but it was Torrance’s predecessor who did the dirty deed. Without belaboring the obvious, because the movie doesn’t either, it’s refreshing to see a teen movie that goes in on the issue of race and white America’s cultural appropriation of blackness. BRING IT ON was also ahead of the curve on gender issues and homosexuality, as two of the Toros are guys, one straight and one gay. If any of this were foregrounded too much, the movie could have been insufferable, but the writing, direction, and actors all play everything with a winning lightness of touch.

All of that is true, but what’s truly impressive about BRING IT ON is Peyton Reed’s control over the film’s tone. The movie has a sweet, believable teen romance, and a slightly more steely but still charming series of competition sequences building up towards its climax, yet it still manages to include things that could sink a different movie, like a bikini car wash scene and a truly astounding cameo by Ian Roberts of the Upright Citizens Brigade as Sparky Polastri, a choreographer who the Toros bring in as a specialist to help them develop new moves. I would put this cameo up with Sam Kinison’s in BACK TO SCHOOL in the realm of hysterically bizarro outsized characters that somehow manage not to run away with the movie. I’d definitely pay to see an entire movie about this guy, though I applaud the filmmakers’ restraint in using him sparingly.

So while BRING IT ON is not normally my kind of movie, it ends up being a movie I feel very kindly towards. It doesn’t shy away from the question of sex appeal, but it takes a playful approach. It’s savvier and snappier than most high school movies, and lighter and funnier than most sports movies. Of course all things considered, I’m way more interested in the Gabrielle Union character than the Kirsten Dunst character, but this is a Hollywood movie after all. Until somebody lets me write my own, I’ll take cultural transgression in any dosage I can get it.

BRING IT ON plays tonight at Videology in Brooklyn. Take a parent and have your own mildly awkward experience.