We as a culture tend to mythologize serial killers and the people who try to catch them. In both cases, the mythologized figure is usually a white man. Entertainment is filled with stories about an evil genius and the only man brilliant enough to bring him to justice (generally defined by imprisonment or death). We delight in the cat-and-mouse game between two people at the top of their fields, even when one of those fields consists of torturing and murdering people (usually women and/or young girls). Perhaps the idea that serial killers are exceptional makes them less frightening to us. If the man who stalks and brutalizes dozens, if not hundreds, of women is a one-in-a-million combination of extraordinary intellect and “abnormal” psychology, we can sleep easier at night knowing that we are unlikely to run into him in our daily lives. The depressing and terrifying reality, however, is that these men are not special. They are not remarkable in any way, nor are they unique. Men who enjoy controlling and harming women are a dime a dozen, and the fact that they are so ubiquitous — and get away with it so often — is what makes them so scary.

NO MAN OF GOD, the newest in a long line of films about infamous serial killer Ted Bundy, examines the extraordinary ordinariness of these mythologized killers. Directed by Amber Sealey and written by Kit Lesser (a pseudonym for C. Robert Cargill), this film’s Bundy is not a supernatural boogeyman or an evil genius. He’s just a regular guy who enjoys causing women fear and pain. Bundy is portrayed by Luke Kirby, who once again displays his uncanny ability to inhabit a historical figure, body and soul. Kirby’s depiction of Lenny Bruce is the highlight of the comedy series THE MARVELOUS MRS. MAISEL, and he uses those same skills to highlight Bundy’s cagey, manipulative arrogance. Ted Bundy was not a remarkable man, but he wanted people to think he was, and Kirby captures both the façade and the man underneath it in an eerie, slippery performance that is shocking in how well it gets to the core of Bundy the man rather than Bundy the legend.

Fittingly for a film concerned with deconstructing the allure of serial killers, Ted Bundy isn’t the main character of NO MAN OF GOD. That would be Bill Hagmaier (Elijah Wood), the FBI Special Agent tasked with getting a confession from Bundy in order to get some small bit of justice for Bundy’s victims. As Behavioral Science Unit Chief Roger Depue (Robert Patrick) puts it, their only goal is to “put these girls and their families to rest.” Hagmaier is good at his job, but the film is careful not to mythologize him either. Wood plays him with an intriguing mix of guile and vulnerability. Hagmaier strokes Bundy’s ego enough to keep him talking so that he makes some careless mistakes, such as when Bundy thoughtlessly volunteers Idaho as a state where he has previously unsuspected victims. This moment isn’t played for suspense or underscored as a major narrative moment, however. Most films would add a dramatic sting or adopt some over-the-top editing at this point to celebrate the master profiler’s victory, but NO MAN OF GOD just keeps moving, treating it as no more than an interesting moment in a conversation between two men getting to know each other. 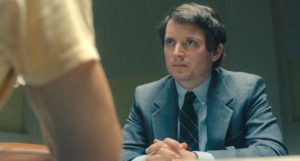 The majority of NO MAN OF GOD takes place in an interrogation room as Bundy and Hagmaier talk. Though the scenes are electric and never lag, thanks to Kirby and Wood’s strong performances and the dynamic yet subtle camerawork, this series of interviews between Bundy and Hagmaier is no climactic showdown between two chess grandmasters. In between discussions of the finer points of criminal profiling and the limitations of law enforcement, they talk about their kids and share funny stories. These are two regular people forming a relationship. Near the end of the film, Bundy refers to Hagmaier as his best friend; though the FBI agent seems surprised by this, he genuinely seems to like Bundy as well. Their close bond is underscored by the editing, which glides between the men’s faces at surprising intervals, and the way the camera moves during their meetings, including a moment where the film breaks the 180-degree rule to show just how disconcertingly similar these men are.

Though the film emphasizes again and again how unremarkable Bundy is, it is not overly interested in gaining sympathy for him; rather, it examines what happens to Hagmaier as he relates more and more to Bundy. NO MAN OF GOD explores what it means to see a serial killer as a human being — which is the reason Bundy gives for calling Hagmaier his best friend; he’s the only person to treat him like a human being, who wants to understand him — and the film does its best to deconstruct Bundy as a legendary figure. The incredibly handsome Kirby transforms himself into the gaunt and sunken-eyed killer, whose reputation for being a good-looking smooth-talker has more to do with our love of mythologizing serial killers than it has to do with reality. We rarely see Bundy head-on in early scenes. Kirby often gazes at people through his eyebrows, cocking his head and looking up at an angle in an attempt to disarm. During his first interview with Hagmaier, he is often framed within the crook of Hagmaier’s arm, making him seem smaller and more ordinary rather than building him up as the embodiment of all evil. Close-ups of individual body parts — including his nose and mouth as he savors the scent and flavor of a piece of contraband chewing gum, in one of the scenes that comes closest to capturing just how frightening Bundy could be — ironically give a clearer picture of the man as a whole. He is bright and understands human nature, which is how he manipulated so many of his victims, but he is still just a regular person, which makes him (and Hagmaier’s sympathy for him) all the more frightening.

NO MAN OF GOD does not focus on the thrill of the chase as Bundy is hunted down. The entire film takes place while he is on Death Row. We never see images of his crimes, whether through reenactments or crime scene photos, and we rarely hear him describe the horrible things he did to his victims. This is not a film that delights in seeing women broken or battered. Rather, it focuses a great deal on how the women around Bundy and Hagmaier are affected by the knowledge and the threat of their respective proclivities. An early scene shows Hagmaier listening to Bundy’s interrogation tapes as he drives to work. A young woman pulls up beside him at a stoplight. The camera seems more interested in her dawning horror as Bundy discusses hunting women than it is in Hagmaier’s belated guilt and embarrassment as he rolls his window up to spare her from the rest of the tape. Though the FBI office where he works is predominantly white and male, Hagmaier does not exist in a bubble of “great men.” He is surrounded by women who could have easily been victims of Bundy or any of the men who are just like him, and he is confronted by the accusing faces of these silent women at every turn. 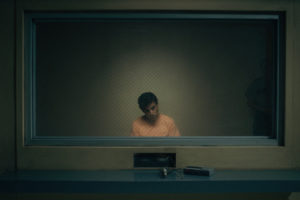 The film spends a lot of time focusing on female extras, reminding the viewer that these nameless women live in a world full of Bundys. They must navigate a world where they are unsafe, where they are viewed as prey while the “exceptional” men around them garner fascination, admiration, and obsession. Bundy can’t remember who all his victims were, but just because we don’t know these women’s names doesn’t mean they don’t matter. Appropriately, the most affecting moment in the entire film happens when the camera lingers on an uncredited woman. Hannah Jessup plays an unnamed production assistant observing Bundy’s final media interview before his death. As he lies to Dr. James Dobson (Christian Clemenson) about how pornography is responsible for the actions of serial killers, the camera zooms in on Jessup slowly as Bundy’s dialogue becomes muffled. What he’s saying doesn’t matter, both because it isn’t true and because no complicated psychological explanation would make a difference. What matters is how she reacts to being in the room, watching and listening to him speak about violent crimes against women. She pulls her clipboard closer to her body, instinctively adopting a defensive posture, and begins crying. It’s a mesmerizing scene, one that captures the complicated messages NO MAN OF GOD is trying to convey. Ted Bundy is a human being who committed horrible deeds, a murderer who is himself about to be murdered. The only people anyone is listening to are the self-important men who talk for hours without saying anything that matters. There is no true justice to be found here, and no one is asking the right questions or focusing on the right people.

Just as the film refuses to show Bundy’s victims dying, so too does it refuse to show him dying. The viewer only sees how the news of his demise affects the people around him: the large bloodthirsty crowd gathered outside to cheer on the execution, and Bundy’s friend Bill as he hears the crowd erupt in excitement once they get confirmation that the serial killer has died. This is not a movie that celebrates death, no matter who is committing the act. What it does instead is ask viewers to think about the victims, the women who died and the women who crossed paths with this man and the women who will one day cross paths with men just like him. NO MAN OF GOD argues that serial killers aren’t extraordinary, mythological villains. They are regular people who do terrible things, and we must reckon with both their humanity and the troubling knowledge that they aren’t as different from the people around us as we would like to believe.