Outside of a comic store and a Ghostface Killah album, folks weren’t really talking about Iron Man before 2008; he was a solid character with great potential that could act as a gateway into this larger more fantastic universe—one that was mostly populated by other B and C-tier (at the time) characters. MCU has taken audiences all over the globe, to the far reaches of space, back and forth in time, to the astral plane, and more; so why has it landed on the deadly hands of Kung Fu? Directed by Destin Daniel Cretton (SHORT TERM 12) (from a script by Cretton, Dava Callaham, and Andrew Lanham), SHANG-CHI has a potential to be a kind of restart for Marvel. A new hero with some extra-abilities but is mainly earthbound in a world teeming with cosmic villains, evil androids, and sorcerers supreme. SHANG-CHI was a chance to highlight MCU’s talent for finding excellent actors, pairing them with each other for strong chemistry, adding fun dialogue, and then a few moments of badassery. Not an Infinite Stone in sight nor any reality-warping wizards in the wings. And for two-thirds of the movie, that is what Cretton and company deliver.

The simple life of Shang-Chi (Simu Liu), being a valet and drunkenly singing karaoke with best friend Katy (Awkwafina), is abruptly halted when some thugs arrive to assault him. It turns out that Shang-Chi isn’t just some schnook like everyone thinks; his father is Wenwu (Tony Leung), a near immortal warrior and leader of the international Ten Rings criminal organization. Wenwu has lived for a thousand years thanks to enchanted gauntlets that also give him great strength and abilities. Shang-Chi was being raised as one of the greatest martial arts warriors when he left home not long after his mother, Jiang Li (Fala Chen), died. Now he and Katy are off to find his sister, Xialing (Meng’er Zhang), before Wenwu does and to unearth the ancient villain’s plan. 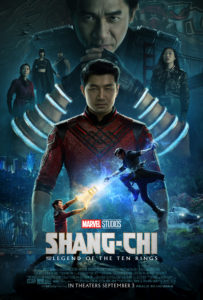 SHANG-CHI AND THE LEGEND OF THE TEN RINGS is two thirds an excellent film and then one third a pretty good one. The first two acts, while not ‘realistic’ per se, are certainly street level and more grounded. These are the acts that feature multiple fight sequences that aren’t THE RAID 2 level but are still pretty damn slick. SHANG-CHI’s stunt coordinator was Bradley James Allen, the member of Jackie Chan’s stunt team who very recently died. He was aided by Lu Junchang (MAN OF TAI CHI) as fight coordinator, with a host of stunt professionals and teams from across the globe…and their combat was captured by DP Bill Pope (THE MATRIX, SPIDER-MAN 2, SCOTT PILGRIM). That’s a solid pedigree and it’s a shame that these exceptional talents aren’t allowed to do more outside of four or five sequences. For martial art aficionados, SHANG-CHI won’t be near top tier (especially with what’s being made these days); but it’s easily the most impressive fight choreography and stunt work in a superhero movie since THE WINTER SOLDER (damning with faint praise, I know).

The action is matched by performances from all the leads, with Liu being the affable foundation on which the rest of the movie is built. While Shang-Chi is a bit underwritten—it’s hard to create an indelible personality when the character’s arc is to find his identity—Liu has a ton of charisma and heart that comes through even amidst that muddled journey. His Shang-Chi is clearly happiest when joking with Katy, but there is a steely confidence that overtakes him when he fights that suggests combat is where he is most comfortable. Awkwafina does a good job as Katy, Shang-Chi’s anchor to real world and to his heart as well audience surrogate and comic relief. The actress has toned down her AAVE appropriation since she first came on the scene (which is still suspect), though it pops up every now and then in awkward fashion. But she pushes through that unfortunate tic with strong throwaway (and undoubtedly improvised) lines that make scenes suitably ridiculous while forging a very strong sense of chemistry with Liu. Tony Leung is Tony Leung. He’s the man. His Wenwu (fashioned after The Mandarin amongst other less-than-racially sensitive villains in Marvel comics’ past) is made of resolute will whose confidence is alluring, even when he’s talking about evil ideas. The breakout star is Meng’er Zhang who showcases being a cold badass, a catty little sister, and a wounded daughter, sometimes within the same scene, with such ease and poise that it’s hard to take your eyes off her. She is an unstoppable force in this film and her performance is pitch perfect for each aspect of the character. 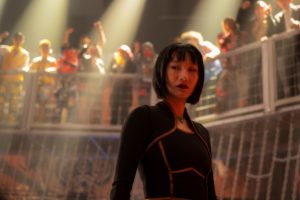 SHANG-CHI could have been a “street level” story (the term used for Marvel characters like Daredevil, Moon Knight, Elektra, etc.) with some mystical elements, with massive fight sequences involving waves of stunt people and it would’ve been great. It would’ve made more sense for the dynamic of people who are torn between the various factions within them, wrestling with who they are and who they want to be. Unfortunately, it goes another way with it, and while that way isn’t bad…it’s not particularly novel. There hasn’t been as much fantasy in MCU as one would think (even despite THOR movies filled with elves and giants), so it is a nice new shade on the cinematic universe to see weird mythical beasts and enchanted weaponry at work. But it becomes a too large sequence with too much CGI over the fate of the world. Cretton and team execute this type of climax as well as one can, it’s just something audiences has seen before. The fate of the world wasn’t as compelling as the fate of this family and its powerful members, and that storyline gets wrapped up a bit tidily in the background of this monstrous spectacle. Again, it’s a fine third act with cool moments and nice designs, but it lacked the intimacy and emotional punch needed for the story that had been driving the rest of the film.

SHANG-CHI AND THE LEGEND OF THE TEN RINGS represents a new take on that first MCU foray: A man with father issues (because they almost all have father issues in Marvel movies) finds his definition of the world being altered, which unmoors his own identity. But through his willingness to forge his own path, and the help of those close to him, he can better understand himself and make his world a safer and more solid place. The difference is that IRON MAN didn’t follow the conclusions of eleven years of storytelling over 22 films. Stark could have his fight with his surrogate father figure who corrupted his talents and it didn’t need to measure up to the previous movies, all with their own escalating world-ending threats. With that break due to COVID and the reset after ENDGAME, SHANG-CHI could have been a return to those slightly smaller roots. The strong script, acting, cinematography, design, and stunt work were all there—but it gave in to the behemoth finale that people expected instead of the more impactful one the film had earned. It’s not just the cameos and nods that are references to the MCU in SHANG-CHI AND THE LEGEND OF THE TEN RINGS, the overblown superhero ending feels of another time that we rightfully left behind. Now that all of the key players have been assembled, hopefully they can focus on these greater strengths and bring a new type of story to the screen for Marvel. It would be fun to revisit this world and these characters, but it would be great if it was done on their own terms.