NOTE: Warner Bros. Home Entertainment provided Daily Grindhouse with a free Blu-ray copy for review purposes. The opinions shared are that of the writer. 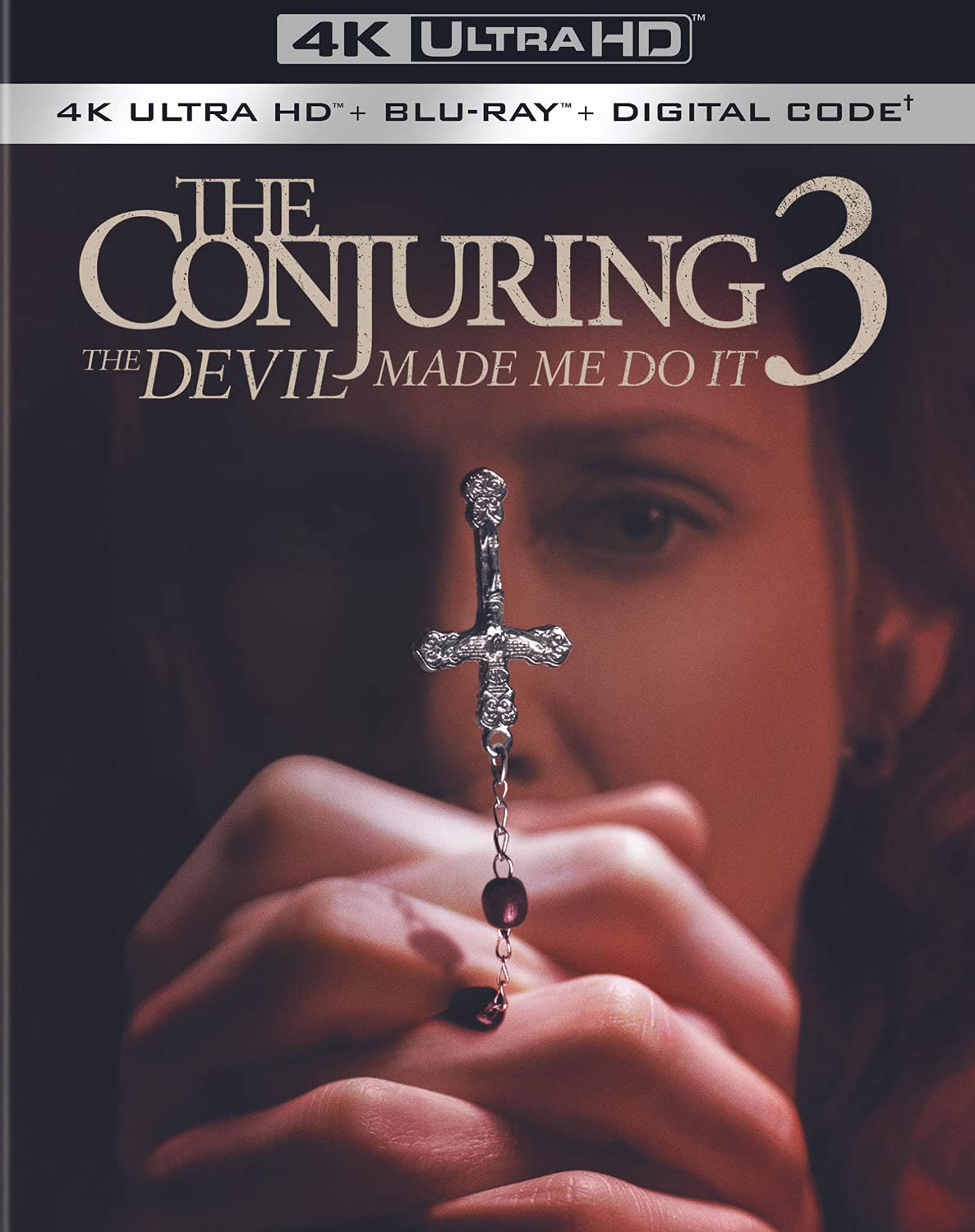 And THE CONJURING train keeps chuggin’ along! After four spin-offs of varying quality following the release of THE CONJURING 2 in 2016, THE CONJURING 3: THE DEVIL MADE ME DO IT returns us to the primary series. Following its production announcement, there were a lot of “oh, really?”reactions in the horror community. The first worrisome development was that James Wan, who had directed the previous two CONJURING films along with new classic INSIDIOUS and unfortunate cultural touchstone SAW, had opted to reduce his involvement to a producer capacity, citing a desired break from working in the horror genre (that is, before making MALIGNANT, an unrelated horror film). Being someone who considers himself a fan of Wan’s horror output, and also being someone who recognizes that the scripts for the first two CONJURING films had been bland, rote, and very familiar but which had become solid genre pics because of Wan’s direction, I assumed the magic was over. When it was additionally announced that THE CONJURING 3 would be directed by Michael Chaves, an untested director who only had THE CURSE OF LA LLORONA to his name – one of the blandest genre movies to come out in a long time (and which crammed in a five-second appearance from Tony Amendola’s Father Perez from ANNABELLE to force an otherwise non-existing association with the CONJURING series) – THE CONJURING 3 seemed doomed. And here we are, all these years, pandemic delays, and strange rumored plot points later (werewolves! Amityville!) and THE CONJURING 3 has landed with a soft okay.

It’s the ‘80s! And the Warrens are still driving around in their Mystery Machine solving spooky cases like the meddlesome kids they are. Their opening-scene reintroduction sees them assisting on an exorcism of a young boy named David (THE HAUNTING OF HILL HOUSE’s Julian Hilliard), which doesn’t go all that well until one of the main characters, Arne Johnson (Ruairi O’Connor), wills the infesting demon out of David and into his own body. The Warrens soon discover that this isn’t a “simple” case of possession like so many of their previous romps, but that Arne is actually in the midst of a “curse,” which means whomever has cursed him can basically rent him out to an interested demon for a few minutes at a time so said demon can get its avatar on and do some murderous mischief…and only one frumpily-dressed, demonologically-experted middle-aged couple can stop them.

Despite my glibness, THE CONJURING 3 isn’t the disaster I expected it to be, even walking away with what I’d confidentlydescribe as the richest and most complex screen story yet from the entire CONJURING universe. As mentioned, the first two CONJURINGs, though far superior to this newest entry, were built on a foundation of very familiar stories, bandying plot points we’ve seen before in the genre. In fact, the story that inspired THE CONJURING 2 had been previously explored with 1992’s incredible and controversial GHOSTWATCH and 2017’s solid BBC miniseries THE ENFIELD HAUNTING. In the face of their stories’ familiarity, Wan ably brought them to life using his uncanny talent for creating shockingly creepy images – and each entry directed by him has more than one example. THE CONJURING has the leaping wardrobe demonand hanging specter; THE CONJURING 2 has the Crooked Man – eerie creations brought to life and depicted in such a manner that they stick with you after the movie has concluded. THE CONJURING 3, though it sidesteps the typical haunted house story in favor of murder mysteries, courtroom drama (which it needed more of), and witchcraft, is desperate for this same feat, leaning not once but twice on a chase sequence involving a very rotund and bloated corpse seemingly borrowed in concept from 2019’s SCARY STORIES TO TELL IN THE DARK, but which doesn’t contain the same staying power. Though this feels like one random example, it sums up the experience of THE CONJURING 3 as a whole – not as good as what’s come before, somehow including the two most recent ANNABELLE spinoffs, but also much better than tripe like THE NUN. The makings for terror are there, and the opening exorcism scene involving a small-statured stunt actor depicting some insane (and very real) body contortionism is genuinely unsettling, but it also unfortunately establishes a level of scares that the remainder of the film simply can’t recapture.

THE CONJURING 3’s main issue is that it’s overdone, as if Chaves believes on-screen chaos and fear are interchangeable, whereas Wan had previously proven many times over that a calm, stationary shot which builds on that misleading foundationof calm is ripe for sudden terror – see the “let’s play Hide and Clap” sequence from the first film for an ideal example. Wan’s CONJURING films established and maintained dread; Chaves doesn’t know how to do that. Though he doesn’t flat-out rely on cheap jump scares like the ol’ cat in the closet, some of his “boo!” choices border on that kind of style, like boosting the decibels of a little kid doing nothing more than ripping a sheet off a bed. Instances like these are harmless of course, as the flick knows that genuine scares are coming soon, but they are leaned on a little too often and they set the tone early on that this new entry doesn’t have anything in store beyond gotcha moments.

Keeping things alive are the returning Vera Farmiga and Patrick Wilson as the ghost-chasing couple, whose performances and holds on their respective characters haven’t changed in the face of a new director. They are the constant component in these films and the rock around which their various conflicts are eventually cleansed. The script by David Leslie Johnson-McGoldrick offers them small moments of humanity to bring light into another dark story, notably the scene where Lorraine insists on investigating a cobweb-ridden crawlspace and Ed tries to deter her by saying it will ruin her dress, leading her to say, literally, “hold my purse.” Is it too on the nose? Sure. But it also works because we’ve seen the horrors this couple has lived through and it’s nice to see them act like real people instead of the somewhat cartoonish bible-brandishing superheroes the film world has turned them into.

Speaking of, nothing annoys a horror fan more than using the words “based on a true story” across a film’s marketing, because in so many instances, the studio is testing the durability of the word “based.” The real-life Warrens have left behind a lifetime of strange and unexplained work with seemingly irrefutable proof of the supernatural, but you’ve also got a large, vocal group of naysayers who called the couple charlatans and frauds. Even if you accept their body of work as fact, the CONJURING series has always pushed those facts to their breaking points, with this latest entry going so far off the reservation that you have to wonder how much people who see the words “based on a true story” are willing to believe. In a historical sense, the Arne Johnson saga – the murder of his landlord and subsequent court case – was faithfully retold; everything having to do with the curse and “the Occultist” (Eugenie Bondurant) was entirely fabricated, and though that sounds like a fair balance, the Warrens’ hunt of the Occultist makes for the bulk of the flick, and once the finale arrives and takes place in a ludicrously complex underground tunnel system beneath a simple farmhouse that is given zero explanation for its existence is what tips the movie’s scales from true morbid history to utter farce. (For those interested, there exists a 1983 made-for-TV movie called THE DEMON MURDER CASE, also based on the Johnson case, starring Kevin Bacon.)

With THE CONJURING 3 having gone to theaters and HBO Max during the eye of the pandemic, the flick still managed to rake in 200 million, becoming another bonafide hit for the franchise. Despite that, there’s been no chatter involving THE CONJURING 4 (except for a dozen websites running “here’s everything we know” articles that conclude absolutely nothing is known), and none of the previously announced spins offs like THE CROOKED MAN and THE NUN 2 appear to be moving forward. I would, of course, welcome a CONJURING 4 – also, of course, depending on who’s at the helm.

THE CONJURING 3: THE DEVIL MADE ME DO IT is now on 4K UHD Blu-ray and Standard Blu-ray. The 4K UHD release contains the following special features:

• ENGLISH DOLBY ATMOS AUDIO TRACK
• “By Reason of Demonic Possession” – An in depth look at the true story that inspired the movie
• “The Occultist” – Meet the terrifying new addition to the Conjuring Universe
• “Exorcism of Fear” – Delve into the making of the movie and the chilling exorcism scene that opens the film”
• “DC Horror Presents The Conjuring: The Lover #1” – A video comic that takes you deeper into the Conjuring Universe
• Optional English SDH, Latin Spanish, Parisian French, Cantonese, Complex Chinese, Korean, Italian, German-SDH subtitles for the main feature