“Grief” and “trauma” have become horror movie buzzwords as of late, even though they’ve been forever intertwined with the genre. Haunted houses have historically been appropriate spaces for exploring loss, with their cavernous empty spaces reflecting the chasms left in their inhabitants’ lives, these lost souls desperately seeking to fill a void. Sometimes, the spirits within provide catharsis and release; sometimes, further oblivion. The best efforts—such as the newly-released THE NIGHT HOUSE—often tread this tightrope, treating it as a fault line that rumbles forth the unsettling tension that can only be caused by doubt. David Bruckner and company step into this space in an impressive, bold fashion with a film that arrives at a familiar horror movie truth: sometimes, the empty spaces left by grief should be left unfilled. 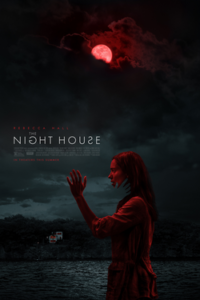 When we meet Beth (Rebecca Hall), she’s just beginning to process the shock and grief of suddenly losing her husband Owen (Evan Jonigkeit) to suicide. A friend consoles her at her doorstep, a casserole in her hand before she suddenly finds herself alone in an empty house. All she knows for sure is that the casserole has to be dumped directly into the trash, the first of a few unconventional jolts. It seems like an innocuous moment, but it’s a prelude to the intimate horrors THE NIGHT HOUSE will explore as this woman sifts through the shattered ruins of her life, only to find that those ruins have jagged edges waiting to cut her even more deeply. Beth has no idea what impelled her husband to take his own life using a gun she didn’t know they owned, and her curiosity naturally gets the best of her as she starts to peer into the dark corners of their relationship. Something is waiting on the other side: she receives texts from Owen’s phone, and the radio is prone to playing one of her late husband’s favorite songs. If she strains hard enough, she can hear him whispering to her as mysterious footsteps lead her to the dock where he killed himself.

But all of this could just be the byproduct of bad dreams. THE NIGHT HOUSE is not the first film to weave the perils of grief through ambiguity, but Bruckner’s nightmare logic is especially suffocating and startling. Because the film is coy about its supernatural elements, Beth’s dreams are indistinguishable from reality: maybe she’s having nightmares or maybe something is haunting her from the beyond. It doesn’t help that her lucid moments are also haunted by bizarre discoveries: weird floor plans for a mirror version of her house, occult literature, and strange photos of women who could pass as her doppelganger. While the latter hints at infidelity (a possibility raised by a friend who warns Beth she might not want to open that particular box), THE NIGHT HOUSE creeps with such insidious purpose that you never believe Bruckner and company would settle for something so banal. No, something much more ominous and otherworldly lurks at the end of this quest, as the script gradually crafts an intriguing mythology with a satisfying payoff.

Not to fire a shot across the genre bow in the direction of some other recent explorations of grief and trauma, but THE NIGHT HOUSE isn’t one of those overly ponderous movies that just dwells on suggestion. While Bruckner’s style sometimes evokes this popular mode of filmmaking—long, lingering shots, portentous camera moves, suffocating silence punctuated by jump scares, negative space hiding a subtle menace—the story ultimately doesn’t play coy about that menace. What’s more, it relies on some clever trickery when the recurring motif of doubles extends to some neat wordplay to complete the puzzle. Look beyond the austere trappings of THE NIGHT HOUSE’s brooding exteriors, and you’ll find some playful funhouse mirrors that distort the film into a fiendishly clever gothic horror movie, complete with a macabre love story. Rare is the film that coils up into an intense ball, only to deftly unwind and nimbly strike the right chords: THE NIGHT HOUSE is a melancholy, unnerving, and cathartic stroll through the funhouse. 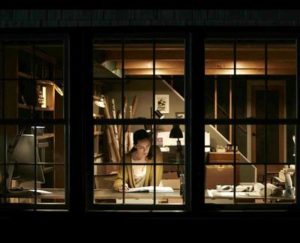 In its shift from existential dread to tricky puzzle box, THE NIGHT HOUSE never loses sight of the woman who anchors it. Hall is marvelous as Beth, an English teacher whose bout with grief has shaken her very foundation. Before her husband’s death, her life was set firmly on its axis: she felt she had all of the answers to life’s mysteries, mainly because she was sure there weren’t any. Now, she’s not so sure. Facing the specter of death will do that to you, so her weary cynicism feels more like a defense mechanism now, deployed to save face. You sense she’s a woman that doesn’t want anyone to know she’s even capable of breaking down, so those private moments of grief are all the more guttural and intense. Occasionally, the grief spills over publically, like when she goes out for some ill-advised drinks with co-workers, or when a concerned parent asks about her kid’s grade, totally ignorant of Beth’s loss. Predictably, neither is a pretty sight because this is a film that recognizes that grief is an ugly thing that decimates us. We can’t be our best selves when part of us is gone, lost forever to a void that will only offer peace when it also claims us.

Between the script’s investment in this human dimension and Hall’s well-drawn performance, THE NIGHT HOUSE terrifies not only with conventional scares but also with its stark portrayal of mourning. Beth’s quest becomes a desperate, existential quest to fill a void she never imagined could have existed; the spirits she disturbs along the way fill them in a way she once refused to imagine. THE NIGHT HOUSE is a reckoning involving an unconventional crisis of faith: what happens when a non-believer must confront the grim truth of what lurks in the hereafter? And while the film sketches a clear picture, the lines connecting the dots are just faint enough to allow for some ambiguity. Maybe everything Beth experiences is all in her head, an elaborate puzzle constructed by a broken brain that can’t fathom the enormity of the emptiness it now faces.

By confronting nothing, she’s created something, and whatever it is climaxes in a harrowing battle for a lost soul, waiting to either be ferried across the river Styx or returned to the shore. Whatever you choose to believe, know this: THE NIGHT HOUSE is a gut-wrenching, stomach-knotting depiction of one of the most horrific ordeals all of us will endure. Facing the void is only the first step; refusing to surrender to it and vanquishing its lingering, whispering spirits is another kind of hell that may never be conquered. Sometimes, hell clings to us, no matter how hard we try to exorcise it.