Before a screening of his print of 1970’s THE NAUGHTY CHEERLEADER (aka HOW DID A NICE GIRL LIKE YOU GET INTO THIS BUSINESS), Shock & Awe Festival curator Dion Conflict warned the audience that the third reel of the sex comedy was in particularly rough shape. He told the already raucous crowd that the reel had over 100 splices in it, and that he had been offered a higher quality print of the film for $10 more, but refused.

In some cases they came out of a sense of purity. Just as a collector of vinyl prefers the imperfection of physical media, the warmth and tangibility of 35mm and 16mm has an enduring draw for many lovers of film. To them, those splices represent the only true way to experience cinema.

Some were there for the carnival-ish atmosphere, with Conflict’s prizes, noise-makers and off-the-cuff introductions all adding to the proceedings. Getting together with a group of friends to spend the evening munching popcorn and downing soda while laughing uproariously at the often ridiculous cult items being screened. Characters cut off in mid sentence as the image jumps to a second later were just another example of comedy. Just another way to engage with the film.

Many of the films watched on September 28th, 2013 at the beautiful Revue Cinema in Toronto, Ontario are easily available on home formats. Most on VHS, many on DVD and some even on high definition Blu-Ray with immaculate sound and video quality. And it’s entirely valid to watch and enjoy those films at home on your 55 inch flat-screen, or your laptop screen, or on your iPad, or on your CRT monitor. But those who attended the 7th iteration of Dion’s all-night Grindhouse film festival didn’t want immaculacy… they wanted celebration. And they got it. 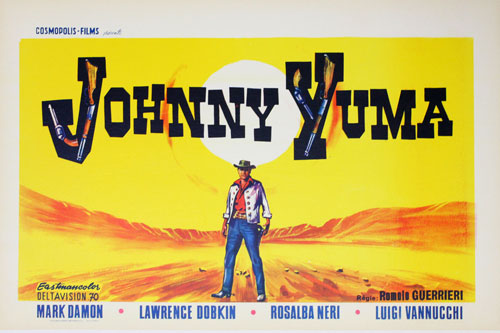 For a prime example of the celebration of the tangible qualities of celluloid, look no further than the first film projected at the marathon. JOHNNY YUMA is an enjoyably melodramatic Spaghetti Western which is notable for a visible level of homoeroticism (taken to extremes in director Romolo Guerrieri’s later $10,000 FOR A MASSACRE) and its Morricone-aping score by  Nora Orlandi, which includes a terrifically rousing title song. It also features a  pleasantly light performance by Mark Damon as the titular character, and some eye-rollingly offensive stereotyping as made flesh by Yuma’s partner Fidel.

Dion’s introduction to the film mentioned that it was likely that this would be the last time the print of JOHNNY YUMA would ever be presented, as it had fallen victim to cellulose triacetate degradation – aka “vinegar syndrome”. Named after the distinctive vinegar smell which the film emits, the degradation eventually leads to shrinkage, embrittlement, and buckling of the gelatin emulsion. Dion joked that we were witnessing the reverse of a film premiere – it was the very last time that print would be screened, and possibly the last time any film print of JOHNNY YUMA would be screened in Canada.

And with that knowledge at the forefront, the film began. The sound was tinny (and perpetually non-existent in the first few minutes), and the picture was so washed out it was almost sepia toned, but nobody in the audience cared. Watching the film was a beautiful, consistently entertaining experience, with a mid-film barfight having the crowd in hysterics, and the inventive (and violent) climax generating applause. Even in this compromised form, the entertainment value shone through. A perfect start. 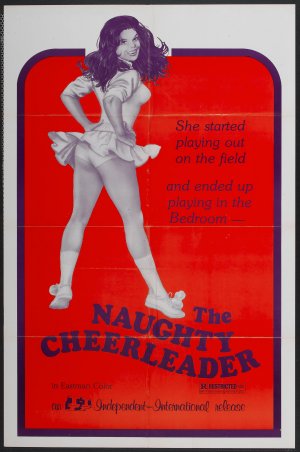 Designed as a showcase for Playboy covergirl Barbi Benton, THE NAUGHTY CHEERLEADER fails as a sex comedy, but is packed full of head-scratching moments of oddness – and Klaus Kinski manages to add some (somewhat random) energy to the film just as it starts to hit a lull. It’s rather shockingly devoid of nudity, but does feature an impossibly young Ed Begley Jr. as a clumsy bellhop!

Despite Dion’s pre-screening concern regarding the state of the third reel, it could hardly make the plot less comprehensible. This was a mess from start to finish, but the still-excitable crowd absolutely ate it up; particularly Kinski’s performance, the eye-bleedingly bad 70s fashion, and a musical montage set among some outrageous Italian stereotypes.

Between films was an array of odd short films from Dion’s collection, including a tribute to corningware, a look at a Russian circus, and the trailer for Canadian classic THE ROWDYMAN. The capable staff of the Revue Cinema were also serving up themed goodies, including some incredible looking BLOODSPORT themed cupcakes; though at this point a few attendees were already starting to drift away. It takes a strong constitution to make it this far.. But for those who stay, there’s a treat to come, and many miles before they sleep. 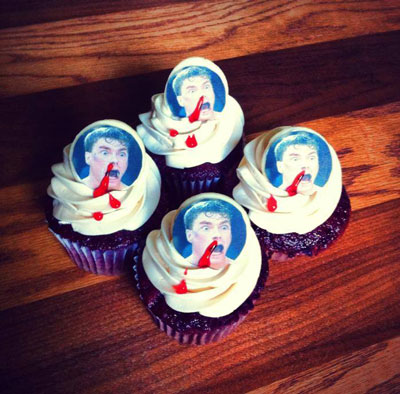 As per usual, Dion made the crowd promise UNDER PENALTY OF DEATH to not reveal the identity of the mystery film. A room full of sleep-deprived folks raising their arms and reciting a cobbled together oath of loyalty felt rather surreal, but it was still comparatively early. More bottomless soda. More popcorn. More prizes of Intellivision games and walkmans being distributed via random ticket draws.

It’s safe to say that nobody in the room had ever had a theatrical screening of this particular film before, and reactions were predictably intense. With more than a year since the previous Shock & Awe event, it was clear that Dion was pulling out all the stops, and those who left early missed out on something truly special.

Minor celebrating among the weary attendees. They’ve made it to the half way mark. Many stumble out into the darkness, knowing that this will be their last chance to take in some of the cool night air before the retina-searing sun arrives. This is usually where many drop out. Enthusiasm and energy at the beginning of the evening has devolved into sore necks and backs, and bodies crying out for sleep. A few vanish. More stay. The next film is what will separate the men/women from the boys/girls. 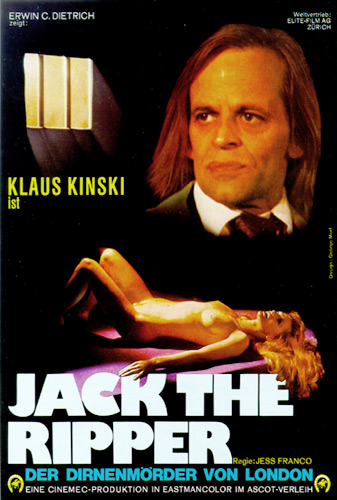 Jesús “Jess” Franco passed away in April of this year and left behind a legacy of – literally – hundreds of films, of massively varying quality. Prolific into his final years, the director battled with funding and distribution limitations in the 1970s, but occasionally was able to put together films of impressive scope and visual style. One of his most widely available of the decade was this truly strange Swiss-German alternate history re-telling of the story of Jack The Ripper, which once again features Klaus Kinski in trademark bug-eyed style as the serial killer at its center.

Here – with a gleeful disinterest in recorded history – the Ripper is revealed from the start as Dr. Dennis Orloff (shades of Franco’s classic AWFUL DR. ORLOFF), who is slicing up prostitutes due to being psychologically damaged during childhood by his own promiscuous mother. Orloff is played in full disinterested mode by Kinski, showing surprisingly little energy despite ample opportunity to gesticulate over naked flesh. He’s being pursued by Inspektor Selby, who gets sidetracked for most of the movie by a collection of horrifically dubbed “Londoners”, before his girlfriend Cynthia (Josephine Chaplin) decides to lure the killer out of hiding.

The Swiss locations don’t quite convince, but this is a capably made pot-boiler that tends to grind to a halt whenever focus returns to the interminable investigation. Coming after the mystery film, the crowd struggled – with many failing – to keep their eyes open. What they needed was something to help steel their resolve. Something to get the blood moving again. 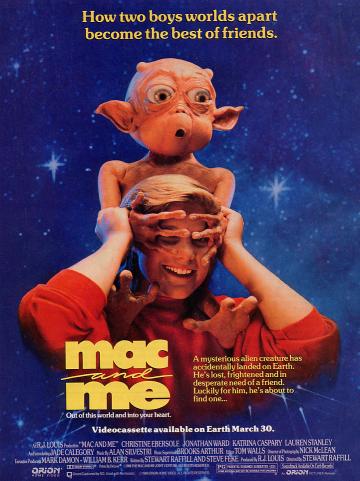 As has become a trademark aspect of the Shock & Awe experience (starting with TINTORERA at the very first event back in 2008), noisemakers were distributed throughout the crowd before the 6 AM screening of this bizarre E.T. riff, with viewers expected to blow enthusiastically to announce any examples of visible advertising on the screen.

Considering that the barrage of product placement – from Coca Cola, to Sears, to Dos Equis – is non-stop, with a notable scene taking place INSIDE a McDonalds (complete with Ronald McDonald as “himself” and a dance sequence), you can imagine the cacophony of bleating that occurred. But the sheer amount of ridiculousness and crowd interaction did exactly what it was supposed to. It kept everyone conscious and engaged, and drifting eyelids were propped open for another 90 minutes.

The films at Shock & Awe are not served up solely to be laughed at. Loudly cracking jokes at the screen is generally frowned upon, and respect for your fellow audience members is a big part of the experience. Invited to participate, however, the crowd went into overdrive, and the result was a parade of near-constant laughter, much of it aimed at the truly bizarre film and its horrifically misguided attempt to make the audience sympathize with its terrifying alien creatures.

Dion warned that the first reel of the film was in rough shape, but not even a pristine print could have elicited such joy from the crowd. MAC AND ME was a life raft. A B12 shot of extreme hilarity that came exactly when needed.

Which led to the main event. 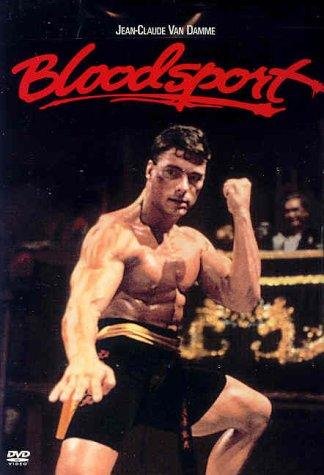 Perhaps sadistically, the final film of every Shock & Awe experience tends to be a fairly beloved genre film which serves as a “draw” to get people into the cinema. Past examples have included THE TEXAS CHAINSAW MASSACRE, Peter Jackson’s BRAINDEAD (aka DEAD/ALIVE), and RETURN OF THE LIVING DEAD. Normally, this would be an absolute treat. An opportunity to see a favorite film projected on 35mm is rare enough these days, and to be able to see them with a crowd of like-minded folks in a beautiful cinema is simply ideal.

But when you’ve already spent 9 hours in that spot. When every ounce of your being is telling you to sleep. When you’ve overdosed on caffeine and pizza and the end is so near.. It can be torturous. Even when that film is an 80s action classic which provided a breakthrough for a fresh-faced Belgian martial artist named Jean-Claude Van Damme. At this point, it’s all about sticking it out. Denying urges. Powering through. Hey! Just like Frank Dux in the movie!

The celebration came to an end with the house lights coming on and the remaining crowd stumbling bleary eyed towards the doors, with a surprisingly spry Dion Conflict passing out keychains to them as they exited like the Revue Cinema’s own Willy Wonka.

They filed out into the harsh Sunday morning sunlight, the prevailing sense of community a testament to the bond that cinema has the power to create. Smiles visible despite most audibly yearning for sleep. Whispered promises to return again. Goodbyes and salutations.

Until next time. Hopefully sooner rather than later.