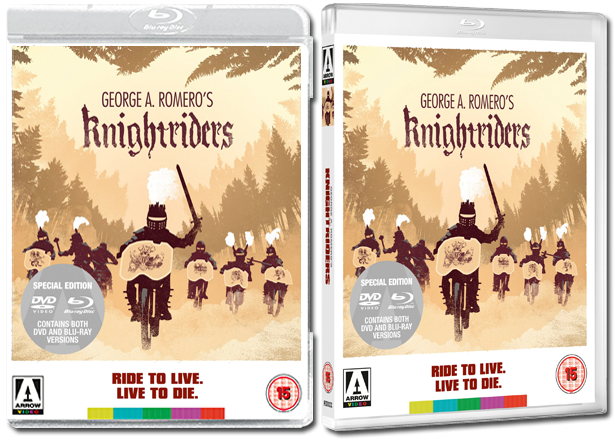 Specially restored by Arrow’s acclaimed team of experts, the deluxe editions of“Knightriders” include both DVD and Blu-ray copies of the film along with a host of special features and collector’s items.

Made immediately after the zombie classic “Dawn of the Dead”, George A. Romero’s“Knightriders” is both quite clearly the work of the same director (there are lots of familiar faces from his other films) as well as a marked change of tone. There’s still plenty of mind-melting action, but rather than flesh eating maniacs, its medieval jousters riding modern-day motorcycles who get to have all the fun!

Starring up-and-coming actor Ed Harris in his first ever leading role (Harris who would go on to become a major Hollywood star, nominated for Academy Awards and Golden Globes for his roles in Apollo 13 and The Truman Show), “Knightriders” depicts a troupe of travelling medieval entertainers, led by Harris, trying to live their lives according to the ideals of King Arthur – No easy feat in Reagan’s America, where the outside world and its financial realities constantly encroach on their dreams.

Instead of flesh and bone, the trusty steeds on which these Knights’ ride are made of steel and engine! They have traded the horses of King Arthur’s men for motorcycles.

With the self-adopted title of “King William”, the group’s leader Billy (played by Harris) becomes gradually more unstable, as he blurs the lines between the medieval knight his act portrays, and the realities of everyday life in the 20th century.

With a memorably eccentric cast of characters (including make-up effects genius Tom Savini in a major role, and a cameo from novelist Stephen King) and a complex, nuanced script, “Knightriders” is Romero’s warmest and most personal film to date.

George A Romero’s directing career began in the 1960s when he began shooting short films and commercials. In one of his early commercial films for American children’s television series “Mister Rogers Neighbourhood”, Mister Rogers has his tonsils removed, it is said that the gruesome nature of this scene inspired Romero to go on and make Horror movies.

Since then, Romero has been at the helm of some of the biggest and most important Horror films in history, including Night Of The Living Dead, The Crazies, Season Of The Witch, andDawn Of The Dead, which in-turn inspired thousands of could-be directors and turned millions of fans onto the genre.

It is a testament to his longevity and continued importance that many of Romero’s classic films have been remade and restored, the latest being Arrow’s highly anticipated Blu-ray edition of “Knightriders”.