Growing up, I loved spoofs. Having a satellite dish in the early ’80s was a wondrous time for a kid who feasted on movies like AIRPLANE!, TOP SECRET!, and raunchy comedies like REVENGE OF THE NERDS and POLICE ACADEMY. At the same time, because my dad controlled the TV remote like the dictator of an island nation holding on to power, I became an aficionado of westerns. While it was not my favorite genre, I became well-versed in the tropes of the heroic gunslinger riding into a frontier town and defeating the local evil cattle baron. 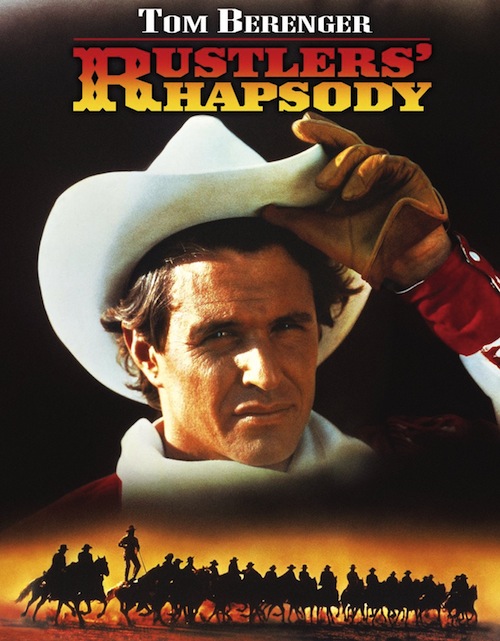 In 1985, RUSTLERS’ RHAPSODY came along, promising to combine my love of silly comedy with the western clichés I knew so well. It was even advertised as being from the director of POLICE ACADEMY. At that point, I had no idea what the director did, but I took that to mean that possibly the best movie I was ever going to see was about to be unleashed upon the world. Of course, I lived in the middle of nowhere, so I had to wait at least a full year for the flick to make its way to HBO/Showtime/The Movie Channel/Cinemax (my movie memory is great, but don’t ask me to remember which channel I watched something on almost 35 years ago). Honestly, for an eleven-year-old in 1986, I was embarrassingly excited to be watching a movie starring Tom Berenger.

But a strange thing happened when I watched RUSTLERS’ RHAPSODY that first time: I was disappointed. For the first time in my life, my reaction to a movie I looked forward to watching wasn’t “That was awesome!” My reaction was, “That wasn’t funny. I thought this was supposed to be funny?” My dad summed it up as “a stupid piece of shit” and wouldn’t let me pick what we watched again for several weeks. 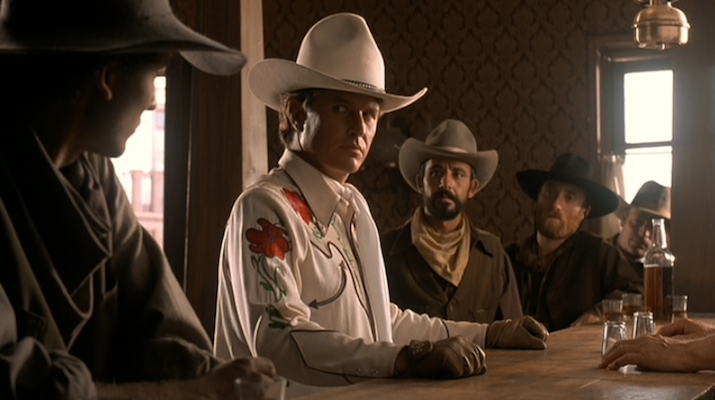 Instead of the ten gags a minute pace of a Zucker-Abrahams-Zucker movie or the presence of a smirking Steve Guttenberg to tell me when something was a joke, RUSTLERS’ RHAPSODY was flat. The jokes tended to come out of left field. Berenger’s singing cowboy dug up roots in the desert that made him act funny. And Andy Griffith, the paragon of decency and good-natured humor, whose TV show I watched in reruns everyday for as long as I could remember, played the bad guy and used a harsh gay slur (even in 1986 rural Missouri, this took me aback). What the hell was this flick?

When I realized the 35th anniversary of RUSTLERS’ RHAPSODY release was upon us, it felt like an interesting time to revisit it. After all, as a 45-year-old beaten down by the depressing realities of this world, maybe I would appreciate the movie more? Maybe it would actually be a work of under-appreciated genius? While the re-watch did not hit those lofty heights, I’m glad I ignored the disappointed reaction of eleven-year-old me. There is a sneakily clever movie under the surface tweaking of western clichés. 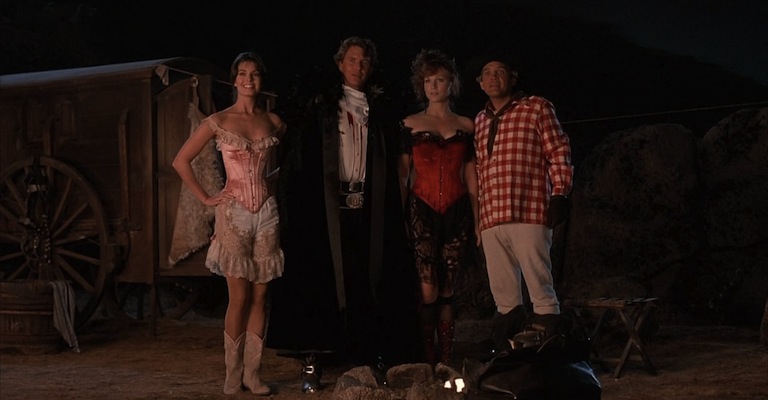 For those who haven’t seen it (for which you could be forgiven), RUSTLERS’ RHAPSODY concerns a singing cowboy in the Gene Autry mold named Rex O’Herlihan (Berenger) who is transported from his black-and-white life where the bad guys are terrible shots to a world of color where evil gunmen walk into saloons and murder unarmed men in cold blood.

This seems like a set up for a winking spoof of hokey singing cowboy cheapies of the ’30s and ’40s as Rex acts as a fish-out-of-water, not understanding the crazy world in which he finds himself. Instead, writer/director Hugh Wilson upends those expectations by establishing Rex as smarter than expected. It does not matter which version of a western he is in, the stereotypes remain the same: the evil cattle baron (in this case, Griffith), the sheriff paid off to ignore the crimes of the rich and powerful, and the town that is going to have the railroad coming through are all constants to Rex. The joke quickly becomes not that Rex is naïve and inept in this world, but that spaghetti westerns and modern revisionist westerns trafficked in the same clichés as those older, cheesier movies. As town drunk/the film’s narrator/Rex’s self-appointed sidekick Peter (G.W. Bailey) points out, the spaghetti western characters who arrive with the railroad just have better background music, wear longer coats, and talk with funny accents…but they’re more or less the same as everyone else in town. 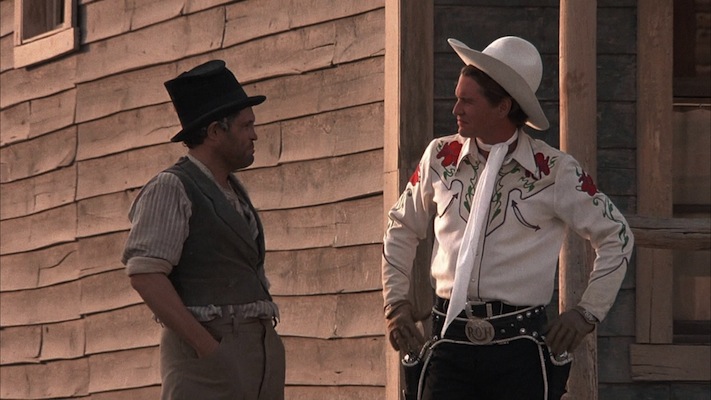 I can see why I was let down by the movie when I was a kid. It’s at its best when it makes wry observations about the way the genre never really changes and weakest when it indulges in straight up jokes. There is a gut-busting sequence when three thugs with rifles explain to their boss that they missed their shots because their target is over a hundred yards away, the wind is kicking up, and they have never used their weapons before that both explains and deflates the trope of the bad guys with bad aim. But on the negative side, a silly subplot about Griffith’s character being in the closet is broad and silly and is eventually punctuated with the Freudian slip line of “Throw another F—- on the fire.” 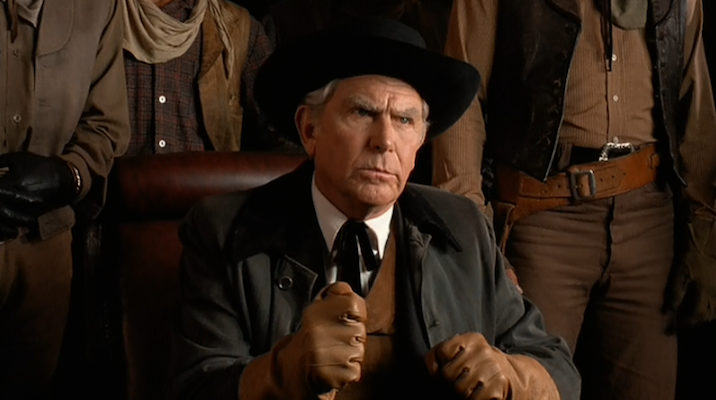 That said, there are some inspired throwaway gags that are so laser-focused on specific (but lesser known) tropes in the genre, they made me bark out in surprised laughter. Bits involving the peaceful immigrant sheepherders who are out of their element cut right to the pretentious heart of HEAVEN’S GATE. And explaining away the cowboy chorus singing backing up that Rex hears in his head as a hallucination brought on by peyote is a clever twist on drug humor that would do Cheech & Chong proud.

There are some clunky plot mechanics at the beginning and in the third act of RUSTLERS’ RHAPSODY that keep it from being a great movie. But it is pretty solid comedy with some impressive stunt work that has aged much better than you might expect. We spend too much time as movie fans complaining about how films we loved as kids don’t hold up. Instead, think about that flick you were under-whelmed by when you were young. Give it a shot now that you have some life experience under your belt. It might just be better than you remember.