Home  ⁄  The Wire  ⁄  RZA ON HIS DIRECTORIAL DEBUT THE MAN WITH THE IRON FISTS, PAM GRIER, BRUCE LEE AND MORE 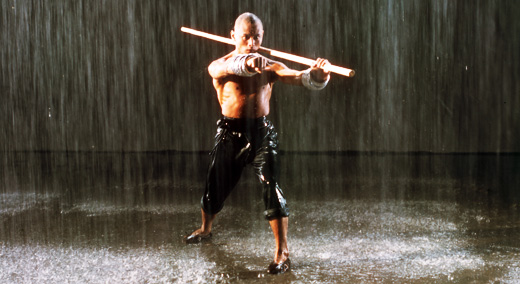 We haven’t heard a lot of news from RZA on his directorial debut THE MAN WITH THE IRON FISTS (written by RZA and Eli Roth, Produced by Marc Abraham, Eric Newman and Eli Roth, and presented by Quentin Tarantino). He and Roth have been keeping this kung-fu grindhouse tribute under wraps. Goddamn I want to see some images from this.

Fuck PROMETHEUS, I want RZA to do a trailer for the trailer. I want QT and Roth talking about their favorite kung-fu films with RZA and then talking about how that relates to their flick. Drop some shit on us RZA, give us a look at Gordon Liu aka The Master Killer. Show us Pam Grier, Jamie Chung, Dave Batista, Russel Crowe. We’re ready to geek.

Anyway, this ain’t much… but it’s something. RZA sat down with a Hip Hop DX for a talk about Wu Tang and also dropped some verbiage on his new flick. Dig this shit:

DX: Pam Grier leaked the info that her character is your mother and she gave up her freedom to save you…anything else you can tell us about working with her?

RZA: First of all, we shot this film in China. So she came way over there to play that role for me, and I was honored. I’m a big Pam Grier fan, and she really is a walking well of wisdom on filmmaking. She’s been doing this since back in the 60’s and 70’s, and she has so much information about the struggles that our people went through being black in Hollywood. Aside from understanding the difficulty getting jobs as actors, she also empathized with Hip Hop culture.

What she gave me in the film is what she gave me in real life—a sacrifice for the next generation. That’s kind of what her role is, but that’s also what she did by coming out to China. She took time to talk to me. And even though we didn’t have a lot of time together, she just shared that wisdom with me immediately. I grasped it, and it helped me throughout the rest of the shoot.

DX: I can’t help but think about all the similarities between Blaxploitation cinema and Kung-Fu movies…

RZA: [laughs] Definitely. And we’ll get into more of that information as the release date gets nearer, but I will say this. I have a centerpiece of Blaxploitation in the film; obviously that was a big 70’s genre. I also have Gordon Liu, the Master Killer himself, who was a centerpiece of the Kung-Fu genre. The funniest part for me though, was that I got a character from Bruce Lee’s Return of the Dragon. In that movie, Bruce Lee is trying to protect the restaurant, and there’s an old white man trying to take over his business. And I cast him in The Man with the Iron Fists, just for that reason. Jon [Jon T. Benn] is in the movie!

We had other choices, but when I found out we could get him, it was like, “Oh no. I want this motherfucker!” He’s one of the first villains that I had ever seen watching Bruce Lee movies. He came in wanting to buy the restaurant, and he was just really discriminating. And in my film he plays a character that’s similar…it’s someone with power. So we’ve got them as well as more modern actors in sort of a mashup. I’ve always been a fan of different genres, and even my production was a sort of mashup before people were even calling them that. Now in film, I’m striving to do the same thing. You get a wide range of characters, and attempt to blend them and make something new and unique.

Be sure to hit that interview link below, Bastards.